General Audience on the prayer of Abraham

This morning's General Audience began at 9:30am local time in Rome (3:30am EDT) inside the Library at the Vatican Apostolic Palace.

In his speech, the Pope continued the cycle of catechesis on prayer, adding his meditation on the theme: The prayer of Abraham (Gn 15: 1, 3-6). 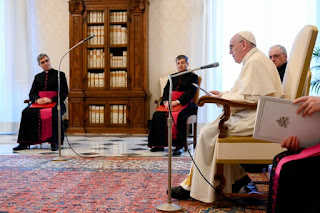 There was a voice that suddenly resonated in Abraham's life. A voice that invited him to embark on a path that tasted of absurdity: a voice that spurred him to uproot himself from his homeland, from the roots of his family, to go towards a new future, a different future. And all based on a promise, which he just had to trust. And trusting a promise is not easy, it takes courage. And Abraham trusted.

The Bible is silent about the first patriarch's past. The logic of things suggests that he worshiped other deities; perhaps he was a wise man, accustomed to scrutinizing the sky and the stars. Indeed, the Lord promised him that his descendants would be as numerous as the stars that dotted the skies.

And Abraham set out. He listened to the voice of God and trusted in his word. This is important: he trusted the word of God. And with his departure, a new way of conceiving the relationship with God was born; it is for this reason that the patriarch Abraham is present in the great Jewish, Christian and Islamic spiritual traditions as the perfect man of God, capable of submitting to him, even when God's will proved difficult, if not incomprehensible.

Abraham is therefore the man of the Word. When God speaks, man becomes the receptor of that Word and his life becomes the place where God asks to be made incarnate. This is a great novelty in man's religious journey: the life of the believer begins by being conceived as a vocation, that is, as a call, a place where a promise is fulfilled; and he moves in the world not so much under the weight of an enigma, but with the strength of that promise, which one day will come true. And Abraham believed the promise of God. He believed and went forth, without knowing where he was going - this is what the Letter to the Hebrews says (cf Heb 11: 8). But he trusted.

Abraham's experience is also testified to by one of the most original texts in the history of spirituality: the Blaise Pascal Memorial. It begins like this: God of Abraham, God of Isaac, God of Jacob, not of philosophers and scholars. Certainty, certainty. Feeling. Joy. Peace. God of Jesus Christ. This memorial, written on a small parchment, and found after his death sewn inside a philosopher's suit, expresses not an intellectual reflection that a wise man like him could conceive of God, but the living, experienced sense of his presence. Pascal even noted the precise moment in which he felt that reality, having finally met it on the evening of November 23, 1654. This was not the abstract God or the cosmic God, no. He is the God of a person, of a call, the God of Abraham, of Isaac, of Jacob, the God who is certainty, who is feeling, who is joy.

Abraham's prayer is expressed first of all by actions: a man of silence, at every stage he builds an altar to the Lord (Catechism of the Catholic Church, 2570). Abraham did not build a temple; instead, he scattered the path of stones that recalled the fact that God had passed by. A surprising God, as when He visited him in the figure of three guests, whom he and Sarah welcome and who announced the birth of their son Isaac (cf Gen 18: 1-15). Abraham was a hundred years old, and his wife ninety, more or less. And they believed, they trusted God. And Sarah, his wife, conceived. At that age! This is the God of Abraham, our God, who accompanies us.

So it was that Abraham became familiar with God, capable of arguing with him, but always faithful. He talked to God and he discussed things ... until the ultimate test, when God asked him to sacrifice his own son Isaac, the son of his old age, his only heir. Here Abraham lived his faith like a drama, like a groping walk in the night, under a sky this time that was without stars. And many times this happens to us too: we walk in the dark, but with faith. God himself stopped the hand of Abraham, which was already ready to strike, because he saw his truly total surrender (cf Gen 22: 1-19).

Brothers and sisters, we can learn from Abraham, we can learn to pray with faith: listen to the Lord, walk, enter into dialogue, have a discussion. We should not be afraid to argue with God! I will also say something that seems to be a heresy. Many times I have heard people saying to me: You know, this happened to me and I got angry with God - Did you have the courage to get angry with God? - Yes, I got angry - But this is a form of prayer. Because only a child is able to get angry with his father and then come back to him. We learn from Abraham how to pray with faith, to dialogue, to discuss, but how to always be willing to accept the word of God and put it into practice. With God, we learn to speak like a son with his dad: listen to him, answer, discuss. But be transparent, like a son with his dad. This is how Abraham teaches us to pray. Thank you.
Testo originale nella lingua italiana

The Holy Father's catechesis was then summarized in various languages and His Holiness offered greetings to each group of the faithful who were following the Audience.  To French-speaking viewers, he said:

I cordially all greet French-speaking people.  Since we have entered the liturgical season of Ordinary Time, we are called, like Abraham, to walk daily in the presence of God, to listen to his Word, always ready to welcome this Word and to put it into practice.  May God bless you.

I greet the English-speaking faithful joining us through the media.

Dear brothers and sisters in the United States, I have witnessed with great concern the disturbing social unrest in your nation in these past days, following the tragic death of Mister George Floyd.

My friends, we cannot tolerate or turn a blind eye to racism and exclusion in any form and yet claim to defend the sacredness of every human life. At the same time, we have to recognize that the violence of recent nights is self-destructive and self-defeating. Nothing is gained by violence and so much is lost.

Today I join the Church in Saint Paul and Minneapolis, and throughout the entire United States, in praying for the repose of the soul of George Floyd and of all those others who have lost their lives as a result of the sin of racism. Let us pray for consolation for their grieving families and friends and let us implore the national reconciliation and peace for which we yearn. May Our Lady of Guadalupe, Mother of America, intercede for all those who are working for peace and justice in your land and throughout the world.

May God bless all of you and your families.

I warmly greet the German believers. Prayer lets us know that God is close to us and guides us. Let us take his word faithfully and joyfully and put it into practice. This Friday, we will celebrate the feast day of Saint Boniface. May the Apostle of Germany help you to proclaim the Lord our salvation and our hope through the gift of our lives.

I cordially greet the Spanish-speaking faithful who are following this catechesis through the media. Let us ask the Lord to grant us the grace to learn to pray with the same faith as Abraham, that we may be docile and available to accept his will and put it into practice, as sons and daughters who trust in his fatherly providence. God bless you.

I extend a cordial greeting to the Portuguese-speaking faithful, encouraging you to seek and to find God in prayer:  In this way you will experience the guidance of the Holy Spirit who will make each of you true witnesses of the Christian faith in society. I gladly bless you and your loved ones.

I greet all Arabic-speaking believers who are following this audience via social media. Abraham was a man of prayer and a friend of God, and he would make an altar to the Lord wherever he went. In his prayers, he was able to argue with God but he always remained faithful to Him, even when he was confronted with the highest and most difficult test, when God asked him to sacrifice his son Isaac. May God bless you and keep you safe from all evil!

I cordially greet all Poles. Special expressions of my closeness are extended to the young who are uniting in prayer and worship during the XXIV Youth Meeting of LEDNICA 2000. This time, only a few of you will be able to physically gather near the baptismal waters of Poland, but many will be able to participate through the media. Together, we thank God for the gift of the Holy Spirit, which revives in you the enthusiasm of faith and makes you witnesses to the joy of those who strive to live in the light of the risen Christ.

May the patron of these meetings - Saint John Paul II, whose 100th birthday we are celebrating this year - accompany you.  Take on his motto: Totus tuus and, like him, live your youth completely entrusting yourselves to Christ and His Mother, so that you may courageously move towards the horizons of the future.

During your meeting, you will make a fairly bold gesture: you will bless your parents. Do this in a humble gesture of love and gratitude for the gift of your life and your faith. I unite with you in prayer and I ask you: pray for me too. God bless you!

I greet the Italian-speaking faithful. The coming feast of the Holy Trinity brings us back to the mystery of the intimate life of the One and Triune God, the centre of the Christian faith and it motivates us to find our comfort and inner peace in the love of God.

I address my thoughts to the elderly, to young people, to the sick and to newlyweds. Trust in the Holy Spirit, who is Lord and gives life and be open to his love so you can transform your life, your families and your communities.