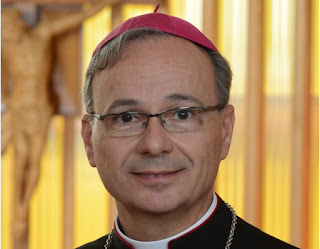 His Excellency, Raymond Poisson was born on 30 April 1958 in Saint-Hyacinthe (Québec).  He studied at the Holy Trinity Seminary in Saint-Bruno and at the André Grasset College before being ordained a priest on 9 December 1983 for the Diocese of Saint-Jean-Longueuil.  He holds a Baccalaureate degree granted by the Faculty of Theology at the University of Montreal.  From 1987 until 1989, he studied at the Pontifical Gregorian University in Rome and was granted a Doctorate in Theology.

After his studies in Rome, he was appointed Secretary to the then Bishop of Saint-Jean-Longueuil, His Excellency, Bernard Hubert while at the same time serving as Associate Pastor and then as Pastor of the parish of Saint-Georges in the city of Saint-Jean-Longueuil.  From 1995 to 2007, he served as Pastor at the co-Cathedral of Saint-Antoine de Padoue.  Then, he served as pastor of the pastoral unity of Sainte-Marguerite-d'Youville and Rector of the Basilica of Sainte-Anne in Varennes.