General Audience on the Liturgy of the Word

This morning's General Audience began at 9:40am in Saint Peter's Square, where the Holy Father, Pope Francis met with groups of pilgrims and the faithful from Italy and from every corner of the world.

In his speech, the Pope continued his catechesis on the Mass, adding his meditation on the Liturgy of the Word: a dialogue between God and his people (Letter to the Hebrews 1:1-2). 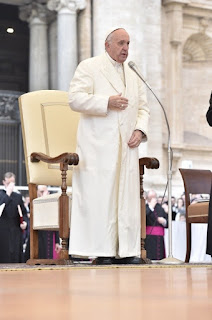 Today, we continue the catechesis on the Mass.  After dwelling on the introductory rites, we now consider the Liturgy of the Word, which is a constitutive part because we gather to listen to what God has done and still intends to do for us.  It is an experience that takes place live and not by hearsay, because when the Church reads the sacred Scriptures, God himself speaks to his people and Christ, who is present in his word, proclaims the gospel (General Instruction of the Roman Missal, 29; Constitution Sacrosanctum Concilium, 7, 33).  How many times, while the Word of God is read, do we hear comments: Look at that ... look at that ...; look at the hat that that lady is wearing, it's ridiculous ... and the comments begin.  Isn't it true?  Should comments be made while we are reading the Word of God? (The people respond: No!)  No, because if you are chatting with people, you are not listening to the Word of God.  When we read the Word of God in the bible - the first Reading, the second, the responsorial psalm and the gospel - we should listen, open our hearts, because it is God himself who is speaking and we shouldn't be thinking about other things or speaking about such things.  Do you understand? ... I will explain to you what happens in the Liturgy of the Word.

The pages of the bible are a written record of the living word, pronounced by God.  It is God who, through the person who is reading, speaks and compels us who are listening in faith.  The Spirit who has spoken through the prophets (Nicene Creed) and who has inspired the sacred authors, causes the word of God to truly work in our hearts to bring about that which resounds in our ears (Lectionary, Introduction, 9).  But in order for us to listen to the Word of God, we must also have open hearts in order to receive the word in our hearts.  God speaks and we listen to him, in order to then put into practice what we have heard.  It is very important for us to listen.  At times, we may not understand why there are some difficult readings, but God speaks to us the same thing in another way.  We need to be silent, to listen to the Word of God.  Let us not forget this.  At Mass, when the readings begin, let us listen to the Word of God.

We need to listen!  In fact, it is a question of life, as the incisive expression reminds us that mankind does not live by bread alone, but on every word that comes from the mouth of God (Mt 4:4): the life that the Word of God gives us.  In this sense, we speak of the Liturgy of the Word as the table which the Lord sets in order to feed our spiritual life.  The table of the liturgy is an abundant table which draws largely from the treasures of the Bible (cf SC, 51), both the Old Testament and the New, because in these, the Church is proclaimed as the unique and particular mystery of Christ (cf Lectionary, Introduction, 5).  Let us consider the richness of the biblical readings offered in the three Sunday cycles which, in the light of the Synoptic gospels, accompany us throughout the liturgical year: a great treasure.  Here I also want to recall the importance of the responsorial Psalm, which serves to favour meditation on what we have heard in the reading that has preceded it.  It is good that the Psalm should be enhanced by being sung, or at least that the refrain should be sung (cf GIRM, 61; Lectionary, Introduction, 19-22).

The liturgical proclamation of these readings, with the songs taken from Sacred Scripture, expresses and favours ecclesial communion, accompanying the journey that we all are on.  We can therefore understand why some subjective choices, like the omission of some readings or substituting non-biblical texts are prohibited.  I have heard that someone, if there is news to share, reads the newspaper during the Mass instead of the scriptures because it is the news of the day.  No!  The Word of God is the Word of God!  We can read the newspapers afterwards.  But in the midst of the Mass, we read the Word of God.  It is the Lord who speaks.  Substituting his Word with other things impoverishes and compromises the dialogue between God and his people in prayer.  On the contrary, this requires the dignity of the ambo and the use of the Lectionary (The criteria and arrangement of the readings of the Mass in the Roman Rite are described in the Introduction of the Lectionary), the availability of good readers and psalmists.  We need to seek out good readers!, those who know how to read, not those who read but cripple the words and who don't understand anything of what they read.  Good readers.  They must prepare themselves to face the test before Mass in order to read well.  And this creates a climate of receptive silence (The Liturgy of the Word should be celebrated in such a way as to promote meditation; therefore it is absolutely necessary that we avoid every form of haste that hinders recollection.  In this, there are also opportune moments of silence, suitable for the assembly, through which, with the help of the Holy Spirit, the word of God can be received in the heart and our answer can be prepared with prayer (GIRM, 56)).

We know that the word of the Lord is an indispensable help in order for us not to lose ourselves, as the Psalmist, turning to God, confesses: Your word is a lamp for my feet, a light for my path (Psalm 119:105).  How can we face our earthly pilgrimage, with all its labours and trials, without being regularly nourished and illuminated by the Word of God that resounds in the liturgy?

Certainly it is not enough for us to hear this Word with our ears, without welcoming into our hearts the seeds of this divine Word, allowing it to bear fruit.  Let us remember the parable of the sower and the different results he achieved based on the different types of soil (cf Mk 4:14-20).  The actions of the Spirit, which makes our response effective, needs hearts that are willing to allow themselves to be cultivated, in order that when we hear the Mass, it can become part of our daily lives according to the admonition of the Apostle James:  Be like those who put the Word into practice, and not simply listen to it, deluding yourselves (James 1:22).  The Word of God creates a journey within us.  We hear it with our ears and it passes into our hearts; it does not remain in our ears, it must continue to our hearts; and from our hearts, it passes into our hands, transformed into good works.  This is the journey that the Word of God travels: from our ears to our hearts and into our hands.  Let us learn these things.  Thank you!

The Holy Father's catechesis was then summarized in various languages, and His Holiness offered greetings to each group of the faithful in attendance.  To English-speaking people, he said:

I greet the English-speaking pilgrims and visitors taking part in today’s Audience, particularly those from Australia and from the United States of America. Upon all of you, and your families, I invoke the joy and peace of our Lord Jesus Christ. God bless you!
at 08:20