At 7:00am local time this morning (2:00am EDT), the Holy Father, Pope Francis celebrated Mass inside the chapel at the Casa Santa Marta. 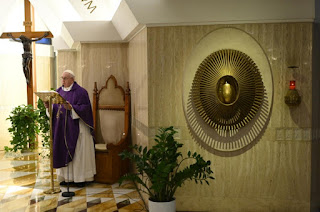 Let us pray today for many people who are unable to react: they are frightened by this pandemic.  May the Lord help them to stand up again, to act for the good of all of society and for the good of the whole community. 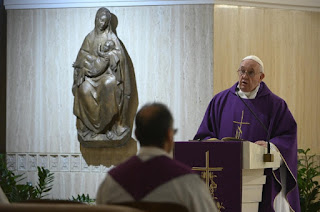 Homily of the Holy Father, Pope Francis
during the Mass celebrated on 30 March 2020

In the responsorial psalm, we prayed: The Lord is my shepherd: I shall not want.  In verdant pastures, he bids me rest, he leads me to quiet waters, he refreshes my soul.  He leads me by the right path because of his name. Even if I go through a dark valley, no harm shall befall me because you are with me. Your rod and your staff give me comfort (Ps 23: 1-4).

This is the experience these two women have had, whose story we read in the two readings. An innocent woman, falsely accused, who was slandered ... and a sinful woman. Both were sentenced to death. The innocent one and the sinner. Some Fathers of the Church saw in these women a figure of the Church: holy, but with sinful children. They said in a beautiful Latin expression: The Church is the casta meretrix (the chaste whore), the saint with sinful children.

Both women in the scriptures were desperate, humanly desperate. But Susanna trusted God. There were also two groups of people, men; both groups were employees in the service of the Church: the judges and the teachers of the Law. They were not clergymen, but they were in the service of the Church, in the courts and in teaching the Law. There were several of them. The former group, those who accused Susanna, were corrupt: corrupt judges, the emblematic figure in history. In the Gospel too, in the parable of the persistent widow, Jesus addressed the corrupt judge who did not believe in God and did not care about others. The corrupt judges. The doctors of the Law were not corrupt, but hypocrites.

And these women, one fell into the hands of the hypocrites and the other into the hands of the corrupt: there was no way out. Even if I go through a valley of darkness I do not fear any harm, because you are with me, your rod and your staff give me comfort (Ps 23: 4). Both women were walking through a dark valley, they went there: a dark valley, towards death. The first explicitly trusted God and the Lord intervened. The second, poor thing, knew that she was guilty; she was shameless in front of all the people - because the people were present in both situations - the Gospel does not say it, but she certainly prayed inside, she asked for some help.

What does the Lord do with these people? He saves the innocent woman, does her justice. He forgives the sinful woman. He condemns the corrupt judges; he helps the hypocrites to convert and before the people he says: Yes, really?  Let any of you who has no sins be the one to throw the first stone (cf Jn 8: 7), and one by one they went away. The apostle John has some irony here: Those who heard this went away one by one, beginning with the older ones (Jn 8: 9). Give them some time to repent; the corrupt he does not forgive, simply because the corrupt ones are unable to ask for forgiveness, so he went further. He has grown tired ... no, he has not tired: he is not capable of growing tired. Corruption has also taken away from those men the ability we all have of being ashamed, of asking for forgiveness. No, the corrupt ones are safe, they go on, destroy, exploit people, like this woman, everything, everything ... they goes on. They put themselves in the place of God.

And the Lord responds to the women. Susanna is freed from those corrupt men, God keeps her going; and to the other woman, Jesus says: Neither do I condemn you. Go, and from now on do not sin anymore (Jn 8: 11). He lets her go. And he does this before the people. In the first case, the people praise the Lord; in the second case, the people learn. They learn what God's mercy is like.

Each of us has our own stories. Each of us has our own sins. And if you don't remember them, think a little: you will find them. Thank God if you find them, because if you don't find them, you are corrupt. Each of us has our own sins. We look to the Lord who is just, but who is so merciful. Let us not be ashamed of being in the Church: let us be ashamed of being sinners. The Church is the mother of all. We thank God for not being corrupt, for being sinners. And each of us, looking at how Jesus acts in these cases, we trust in the mercy of God. And we can pray with confidence in the mercy of God, we can pray for forgiveness. “Because God guides me on the right path because of his name. Even if I go through a valley of darkness - the valley of sin - I do not fear any harm because you are with me. Your rod and your staff give me comfort (cf Ps 23.4).
Testo originale nella lingua italiana 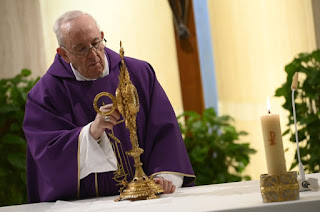