Armenia at the Vatican 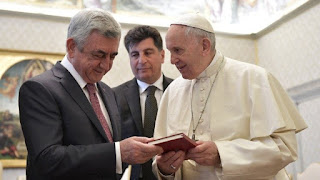 This morning at the Vatican, the President of the Republic of Armenia, His Excellency, Mister Serzh Sargsyan, was received in audience by the Holy Father, Pope Francis. He subsequently met with His Eminence, Pietro Parolin, the Cardinal Secretary of State, and with the Secretary for Relations with States, His Excellency, Paul Richard Gallagher.

During the cordial discussions, keen satisfaction was expressed for the good relations existing between the Holy See and Armenia. It was shown that the inauguration in the Vatican Gardens of the statue of Saint Gregory of Narek, Doctor of the Church, is an opportunity to promote further these relations, as well as those between the Armenian Apostolic Church and the Catholic Church.

Reference was then made to the regional political context, with hope for the solution of situations of conflict, and other current international issues were touched upon, as well as the condition of Christians and religious minorities, especially in theatres of war. 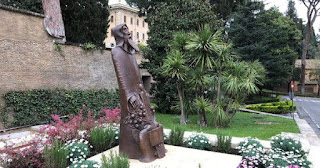 In the company of outgoing Armenian President, Serzh Sargsyan, and with the participation of two Patriarchs of the Armenian Apostolic Church, and the Patriarch of the Armenian Catholic Church, Pope Francis presided over the inauguration and blessing of the statue of Saint Gregory of Narek in the Vatican Gardens this morning.

The groundwork for today’s ceremony was laid by Pope Francis on 12 April 2015 when he celebrated Mass in Saint Peter’s marking the centenary of the genocide of a million and a half Armenians whom the Pope referred to as martyrs. A century has passed since that horrific massacre which was a true martyrdom of your people, in which many innocent people died as confessors and martyrs for the name of Christ, Pope Francis said on that occasion.

During that same liturgy, Pope Francis elevated Saint Gregory of Narek to the dignity of Doctor of the Universal Church. The Pope characterized Saint Gregory as a monk who knew how to express the sentiments of your people more than anyone, and who, as an extraordinary interpreter of the human soul, offers words which are prophetic for us.

Later in June 2016, he visited Armenia. Calling the genocide the first of the deplorable series of catastrophes of the past century, Pope Francis praised the faith of the Armenian people, who, illuminated by the light of the Gospel, even at the most tragic moments of their history, have always found in the cross and resurrection of Christ the strength to rise again and take up their journey anew with dignity.

Today’s occasion is the high point of an ecumenical journey between the Catholic Church and the Armenian Apostolic Church. For the first time in history, all three Armenian Church leaders are gathered together with the Roman Pontiff. It is something that Pope Francis prayed for in 2015. Through the redemptive power of Christ’s sacrifice, may the blood which has been shed bring about the miracle of the full unity of his disciples. In particular, may it strengthen the bonds of fraternal friendship which already unite the Catholic Church and the Armenian Apostolic Church.

The event does not end today in the Vatican Gardens. A copy of the same statue is currently in production and will be placed in the gardens of the Cathedral of Etchmiadzin where an inauguration ceremony will be held at the end of 2018. The Cathedral of Etchmiadzin is the mother church of the Armenian Apostolic Church, and is considered by scholars to be the oldest Cathedral built in ancient Armenia, and is among one of the oldest Cathedrals in the world.

Saint Gregory of Narek is recognized as a Saint in both the Catholic Church, being venerated in a particular way among Catholics of the Armenian Rite, and in the Armenian Apostolic Church. His legacy lives on through this ecumenical effort which is centred on him. In an interview with Vatican News, Mikayel Minasyan, Ambassador of the Republic of Armenia to the Holy See, described Saint Gregory of Narek as a symbol of brotherhood and a bridge between the two Churches and for all Christians, above all those of the Middle East.

Gregory of Narek was a 10th century Armenian monk, poet, and mystical writer and composer. His most well-known literary work is a book of prayers, known as the Book of Lamentations. It is considered a masterpiece of Armenian literature. Saint Gregory himself defined the work as an encyclopedia of prayer for all nations. He hoped that his book would provide guidance in prayer for people of all walks of life in order to reach God.
(Article written by Sister Bernadette Mary Reis, fsp)
at 17:07