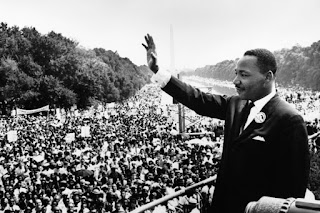 Doctor Martin Luther King, Jr, the renowned American clergyman, civil rights leader and Nobel Prize winner was fatally shot at the Lorraine Motel in Memphis, Tennessee on April 4, 1968. Among his sterling qualities and actions was his embrace of nonviolence and his civil disobedience. Doctor King’s powerful witness and message is best remembered through his seminal I Have a Dream address during the March on Washington on August 18, 1963. That address has been widely hailed as a masterpiece of rhetoric since it invokes the Declaration of Independence, the Emancipation Proclamation, and the United States Constitution. By speaking as he did, he educated, inspired and informed not just the throngs of people gathered on the steps of the Lincoln Memorial, but people throughout America and unborn generations. The ideas found in King's stirring address reflect his personal experiences of the mistreatment of blacks. The rhetoric of the speech provides redemption to America for its racial sins. King describes the promises made by America as a promissory note on which America has defaulted.

As we remember the 50th Anniversary of his death, let us give thanks to God for this true prophet of our times, who taught us how to dream and how to realize those dreams.

Excerpt from the conclusion of Dr. King's famous address:


I have a dream today. I have a dream that one day every valley shall be engulfed, every hill shall be exalted and every mountain shall be made low, the rough places will be made plains and the crooked places will be made straight and the glory of the Lord shall be revealed and all flesh shall see it together. This is our hope. This is the faith that I will go back to the South with. With this faith we will be able to hew out of the mountain of despair a stone of hope.

With this faith we will be able to transform the jangling discords of our nation into a beautiful symphony of brotherhood.

This will be the day when all of God's children will be able to sing with new meaning 'My country 'tis of thee, sweet land of liberty, of thee I sing. Land where my father's died, land of the Pilgrim's pride, from every mountainside, let freedom ring!'

How can we forget Pope Francis’ stirring address delivered to the special joint session of the United States Congress on September 24, 2015. It was an electric moment and a spellbinding lesson on good citizenship. In extolling the valiant virtues and qualities of the American people, Francis zeroed in on four American citizens who embodied the best of American culture and history: Abraham Lincoln, Martin Luther King, Dorothy Day and Thomas Merton. Lincoln, according to Francis, were the guardians of liberty, who laboured tirelessly that 'this nation, under God, might have a new birth of freedom. Building a future of freedom requires love of the common good and cooperation in a spirit of subsidiarity and solidarity'.

Doctor Martin Luther King embodied the compelling need to live as one, in order to build as one the greatest common good: that of a community which sacrifices particular interests in order to share, in justice and peace, its goods, its interests, its social life. Dreams which lead to action, to participation, to commitment. Dreams which awaken what is deepest and truest in the life of a people.

The Pope also spoke of Dorothy Day, founder of the Catholic Worker Movement. Of this great woman he said: Her social activism, her passion for justice and for the cause of the oppressed, were inspired by the Gospel, her faith, and the example of the saints.

And to complete the quartet of heroes, Pope Francis offered Thomas Merton to the powerful and mighty gathered that morning on Capitol Hill. Merton for Francis, “…remains a source of spiritual inspiration and a guide for many people … Merton was above all a man of prayer, a thinker who challenged the certitudes of his time and opened new horizons for souls and for the Church. He was also a man of dialogue, a promoter of peace between peoples and religions.

Three sons and a daughter of this land, four individuals and four dreams: Lincoln, liberty; Martin Luther King, liberty in plurality and non-exclusion; Dorothy Day, social justice and the rights of persons; and Thomas Merton, the capacity for dialogue and openness to God. Four representatives of the American people.

Pope Francis concluded his stunning address with these words: A nation can be considered great when it defends liberty as Lincoln did, when it fosters a culture which enables people to 'dream' of full rights for all their brothers and sisters, as Martin Luther King sought to do; when it strives for justice and the cause of the oppressed, as Dorothy Day did by her tireless work, the fruit of a faith which becomes dialogue and sows peace in the contemplative style of Thomas Merton.

We have much to learn from the lives of Abraham Lincoln, Martin Luther King, Dorothy Day, Thomas Merton and Pope Francis. Each of these great persons teach us how to dream, and how to bring heaven to earth. They are sterling role models of good citizenship and offer us trusted roadmaps along our journey to the heavenly Jerusalem.
at 12:23