Mass celebrated with the Missionaries of Mercy

At noon today (6:00am EDT) at the Altar of the Chair inside the Vatican Basilica, the Holy Father, Pope Francis presided over the concelebration of the Eucharist along with the Missionaries of Mercy. 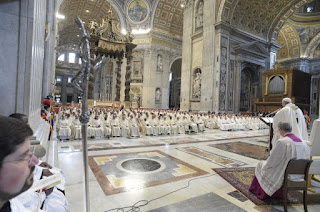 Homily of the Holy Father, Pope Francis
for the Mass celebrated with the
Missionaries of Mercy

We have heard in the Acts of the Apostles: With great strength, the apostles continued to testify to the resurrection of the Lord Jesus (Acts 4:33).

Everything begins with the Resurrection of Jesus: from it derives the witness of the Apostles and, through it, the faith and the new life of the members of the community take shape, characterized by its bluntly evangelistic style.

The Readings for today's Mass highlight these two inseparable elements very well: personal rebirth and the life of the community.  Therefore, turning to you, dear brothers, I am thinking about the ministry that you are carrying out, a ministry that began with the Jubilee of Mercy.  A ministry that moves in both directions: in service to people, so that they can be reborn from above, and a service to the community, so that we may live the commandment of love with joy and coherence.

In this sense, the Word of God offers two directives that I want to share with you, thinking especially about your mission.

The Gospel recalls the fact that those who are called to bear witness to the Resurrection of Christ should themselves, in the first person, be reborn from on high (cf Jn 3:7).  Otherwise, you end up becoming like Nicodemus who, despite the fact that he was a teacher in Israel, did not understand the word of Jesus when he said that in order to see the kingdom of God, we must be born from above, born of water and the Spirit (Jn 3:3-5).  Nicodemus did not understand God's logic, which is the logic of grace, of mercy, according to which those who make themselves small are considered great, those who place themselves last become first and those who recognize themselves as sick are healed.  This is what it means to truly leave the first priority to the Father, to Jesus and to the Holy Spirit of our lives.  Be careful: it's not a matter of becoming invaded priests, as though we were depositories of some extraordinary charism.  No.  Normal priests, simple, humble, balanced, but able to constantly allow ourselves to be refreshed by the Spirit, docile to his strength, inwardly free - above all free of themselves - so that you can be moved by the wind of the Spirit who breathes where he will (cf Jn 3:8).

The second directive concerns service to the community: being priests who are capable of raising in the midst of the desert of this word a sign of salvation which is the cross of Christ, a source of conversion and of renewal for the entire community and for the world (cf Jn 3:14-15).  In particular, I want to point out that the Lord who died and rose again is the strength that creates communion in the Church and, through the Church, in all of humanity.  Jesus said it before his passion: When I am raised up from the earth, I will draw all people to myself (Jn 12:32).  This strength of communion has been present since the beginning of the community of Jerusalem where - as the Book of Acts attests - the multitude of those who had become believers were of one heart and one soul (Acts 4:32).  This was communion that was made concrete in the sharing of goods, for which all things were held in common among them (Acts 4:32) and no one among them was in need (Acts 4:34).  But this communal lifestyle was also contagious among others: the living presence of the Risen Lord produces a strength of attraction which, through the witness of the Church and through the various forms of proclaiming the Good News, tends to reach everyone, with no exceptions.  You, dear brothers, place your specific ministries as Missionaries of Mercy at the service of this dynamism.  In fact, both the Church and the world today have a particular need for Mercy so that the unity that God desires in Christ may prevail over the negative actions of the evil one who takes advantage of so many current means, all of which are in and of themselves good, but which are misuse in order to produce negative results which divide rather than unite.  We are convinced that humility is superior to conflict (Evangelii gaudium, 228), but we also know that without Mercy, this principle will never have the strength to be concretely implemented in life and in history.

Dear brothers, depart from this encounter with the joy of being confirmed in the ministry of Mercy.  Confirmed above all in the grateful confidence of having been first called and reborn again and again from above, out of the love of God.  And at the same time, confirmed in the mission of offering everyone a sign of Jesus raised up from the earth, so that the community may be a sign and an instrument of unity in the world.