A Coadjutor Archbishop for Halifax

This morning in Rome, the Holy Father, Pope Francis has appointed His Excellency, Brian Dunn, currently the Bishop of Antigonish (Nova Scotia) as the Coadjutor Archbishop of Halifax-Yarmouth (Nova Scotia).  This means that Bishop Dunn will continue to serve as Bishop of Antigonish until the current Archbishop of Halifax-Yarmouth - His Excellency, Anthony Mancini, currently aged 73 years - reaches the age of 75 years, at which time all Bishops are required to submit a letter of resignation to the Holy Father. 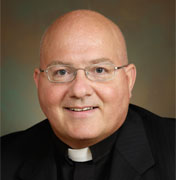 His Excellency, Brian Joseph Dunn was born in Saint John's, Newfoundland on 8 January 1955.  He entered Saint Peter's Seminary in London (Ontario) and was grated a Bachelor of Arts degree in 1976 and a Master of Divinity degree in 1979.

He was ordained a priest on 28 August 1980 for the Diocese of Grand Falls.  In 1991, he earned a Doctorate in Canon Law at Saint Paul's University (Ottawa) and in 2006, he was granted a Master's degree in Liturgy from Notre Dame University in Indiana (USA).  After five years of pastoral ministry as Parochial Vicar, and having served as Pastor of four parishes, each for distinct periods covering a total of fourteen years, he taught at the Atlantic School of Theology in Halifax, at Saint Paul's University in Ottawa, and from 2002 to 2008 at Saint Peter's Seminary in London where he taught Canon Law.

On 9 October 2008, he was consecrated Bishop in the Cathedral of the Immaculate Conception in Grand Falls-Windsor, and served as Auxiliary Bishop of Sault Ste Marie before being transferred to the Diocese of Antigonish on 21 November 2009.

In addition, Bishop Dunn serves as part of the Commission for Liturgy and the Sacraments at the level of the Canadian Conference of Bishops.
at 10:20