This morning's General Audience began at 9:20am local time (3:20am EDT) in Saint Peter's Square where the Holy Father, Pope Francis met with groups of pilgrims and the faithful from Italy and from every corner of the world.

In his speech, the Pope added his mediation on the Apostolic Voyage that he has recently completed in Morocco (Mt 13:33).

After having summarized his catechesis in various languages, the Holy Father addressed particular greetings to each group of the faithful in attendance.  Then, he offered a call on the occasion of the VI United Nations World Day of Sport for Peace and Development which is observed today. 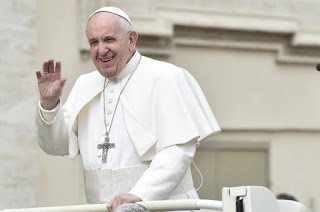 On Saturday and Sunday, I accomplished an Apostolic Voyage to Morocco, having been invited by His Majesty, King Mohammed VI.  I wish to express my gratitude to him and to the other Moroccan authorities for their warm welcome and for their collaboration, especially the King: he was so fraternal, so friendly, so close.

Above all, I thank the Lord, who allowed me to take another step on the path of dialogue and encounter with our Muslim brothers and sisters, in order to be - as the motto of the Voyage says - Servant of hope in today's world.  My pilgrimage followed in the footsteps of two great saints: Francis of Assisi and John Paul II.  Eight hundred years ago, Francis took the message of peace and fraternity to Sultan al-Malik al-Kamil; in 1985, Pope Wojtyła accomplished his memorable visit to Morocco, after having received at the Vatican - the first among the Muslim Heads of State - King Hussan II.  But someone might ask: why does the Pope visit Muslims and not only Catholics?  Why are there so many religions, and why are there more religions than ever before?  With Muslims we are descendants of the same Father, Abraham: why does God allow so many religions? God wanted to allow this: Scholastic theologians referred to the permissive voluntas (will) of God. He wanted to allow this reality: there are so many religions; some are born of culture, but always look to the sky, they look to God. But what God wants is fraternity between us and in a special way - here is the reason for this journey - with our brothers, who are children of Abraham like us, the Muslims. We must not be afraid of the difference: God has allowed this. We should be frightened if we do not work fraternally, striving to walk together in life.

Serving hope, in a time like ours, means first of all building bridges between civilizations. And for me it was a joy and an honour to be able to do this with the noble Kingdom of Morocco, meeting its people and their rulers. Recalling some important international summits that took place in that country in recent years, we reiterated with King Mohammed VI the essential role of religions in defending human dignity and promoting peace, justice and care for creation, which is our common home. In this perspective I also signed an Appeal for Jerusalem together with the King, so that the Holy City may be preserved as a patrimony of humanity and a place of peaceful meeting, especially for the faithful of the three monotheistic religions.

I visited the Mausoleum of Mohammed V, paying tribute to his memory and the memory of Hassan II, as well as the Institute for the training of imams and preachers. This Institute promotes an Islam that is respectful of other religions and rejects violence and fundamentalism, that is, it emphasizes that we are all brothers and we must work for fraternity.

I paid particular attention to the migration issue, both speaking to the Authorities, and especially in the meeting specifically dedicated to migrants. Some of them testified that the life of those who emigrate changes and returns to being human when they find a community that welcomes them as a person. This is fundamental. Just in Marrakech, Morocco, last December the World Pact for a secure, orderly and regular migration was ratified. An important step towards taking responsibility for the international community. The Holy See has offered our contribution which is summarized in four verbs: welcoming migrants, protecting migrants, promoting migrants and integrating migrants. It is not a question of lowering welfare programs from above, but of making a journey together through these four actions, to build cities and countries that, while preserving their respective cultural and religious identities, are open to differences and know how to value them in the name of human brotherhood. The Church in Morocco is very committed to being close to migrants. I don't like to say migrants; I like to speak more often about migrant people. Do you know why? Because migrant is an adjective, while the term person is a noun. We have fallen into the adjective culture: we use many adjectives and often forget the nouns, that is the substance. The adjective must always be linked to a noun, to a person; therefore a migrant person. In this way, there is respect and we don't fall into this adjective culture that is too liquid, too gaseous. The Church in Morocco, I said, is very committed to being close to migrant people, and so I wanted to thank and encourage those who generously spend themselves in their service by fulfilling the word of Christ: I was a stranger and you welcomed me (Mt 25:35 ).

Sunday was dedicated to the Christian community. First of all, I visited the Rural Social Services Centre, run by the Daughters of Charity nuns, the same ones who run the dispensary and the children's clinic here in Santa Marta, and these sisters work with the collaboration of numerous volunteers, offering different services to the population.

In the Cathedral of Rabat I met the priests, consecrated persons and the World Council of Churches. It is a small flock in Morocco, and for this reason I recalled the Gospel images of salt, light and yeast (cf Mt 5: 13-16; 13:33) which we read at the beginning of this audience. What matters is not the quantity, but that the salt has taste, that the light shines, and that the yeast has the strength to make the whole mass ferment. And this does not come from us, but from God, from the Holy Spirit who makes us witnesses of Christ where we are, in a style of dialogue and friendship, to be experienced first of all among us Christians, because Jesus says, by this all will know that you are my disciples: if you have love for one another (Jn 13:35).

And the joy of ecclesial communion found its foundation and full expression in the Sunday Eucharist, celebrated in a sports complex in the capital. Thousands of people from about 60 different nations! A singular epiphany of the People of God in the heart of an Islamic country. The parable of the merciful Father made the beauty of God's plan shine in our midst, a plan by which God wants all his children to take part in his joy, at the feast of forgiveness and reconciliation. At this feast we find those who know how to recognize themselves in need of the Father's mercy, those who know how to rejoice with Him when a brother or sister returns home. It is no coincidence that, where Muslims invoke the Clement and the Merciful One every day, the great parable of the Father's mercy resounded. This is true: only those who are reborn and live in the embrace of this Father, only those who feel they are brothers can be servants of hope in the world.

The Holy Father's catechesis was then summarized in various languages and His Holiness offered greetings to each group of the faithful in attendance.  To English-speaking pilgrims, he said:

I greet the English-speaking pilgrims and visitors taking part in today’s Audience, especially those from England, Scotland, Ireland, Australia, China, the Philippines and the United States of America. May the Lenten journey bring us to Easter with hearts purified and renewed by the grace of the Holy Spirit. Upon you and your families I invoke joy and peace in Christ our Redeemer!

Finally, the Holy Father recalled the importance of this day for the role of sports in promoting peace and development.

Today is the VI World Day of Sports for Peace and Development, which is sponsored by the United Nations.  Sport is a universal language, which embraces all people and contributes to overcoming conflicts and uniting people.  Sport is also a source of joy and of great emotions, and it is a school where virtues are forged for the human and social growth of persons and of communities.  I wish that everyone might get involved in the game in life and in sport.
at 13:51