This morning's General Audience began at 9:20am local time (3:20am EDT) in Saint Peter's Square, where the Holy Father, Pope Francis met with groups of pilgrims and the faithful from Italy and from every corner of the world.

In his speech, on the vigil of the Easter Triduum, the Pope offered his meditation on the theme: Easter, prayer to the Father in times of trial (Mk 14:32-36a).

After having summarized his catechesis in various languages, the Holy Father offered greetings to each group of the faithful in attendance.  At the conclusion of his greetings to pilgrims offered in French, the Holy Father expressed his closeness to the city of Paris and to the entire French population following the fire that destroyed a great part of the Cathedral of Notre-Dame. 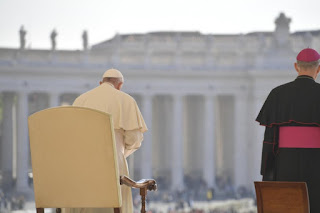 In recent weeks, we have been reflecting on the prayer of the Our Father.  Now, on the vigil of the Easter Triduum, let us focus on some words with which Jesus prayed to the Father during his Passion.

The first invocation takes place after the Last Supper, when the Lord said, raising his eyes to heaven, said: Father, the hour has come: glorify your Son - and then - glorify me before you with that glory which I had before you before the world existed (Jn 17: 5.5). Jesus asks for glory, a request that seems paradoxical while the Passion is upon him. What glory is this? Glory in the Bible indicates the revealing of God; it is the distinctive sign of his saving presence among men. Now, Jesus is the one who shows God's presence and salvation in a definitive way. And he does it in the Passover: raised up on the cross, he is glorified (cf Jn 12: 23-33). There, God finally reveals his glory: he takes away the last veil and astonishes us as never before. In fact we discover that the glory of God is all love: pure love, crazy and unthinkable, beyond all limits and all measure.

Brothers and sisters, let us make Jesus' prayer our own: let us ask the Father to remove the veils from our eyes so that during these days, looking at the Crucifix, we can accept that God is love. How many times do we imagine Him to be a master and not a Father, how often we think of Him as a severe judge rather than as a merciful Saviour! But Easter, God clears away the distance, showing himself in the humility of a love that demands our love. Therefore, we give him glory when we live all that we do with love, when we do everything with full minds and hearts, for Him (cf Col 3:17). True glory is the glory of love, because love is the only glory that gives life to the world. Of course, this glory is the opposite of worldly glory, which comes when one is admired, praised, acclaimed: when I am the centre of attention. The glory of God, on the other hand, is paradoxical: there is no applause, no audience. At the centre there is not the ego, but the other: at Easter we see in fact that the Father glorifies the Son while the Son glorifies the Father. No one glorifies himself. We can ask ourselves today: What is the glory I live for? Mine or God's? Do I just want to receive from others or do I seek to give to others? "

After the Last Supper, Jesus enters the garden of Gethsemane; and here also he prays to the Father. While the disciples are unable to stay awake and Judas is arriving with the soldiers, Jesus begins to experience fear and anguish. He feels anguish for what awaits him: betrayal, contempt, suffering, failure. He is sad and there, in the abyss, in that desolation, he addresses to the Father the most tender and sweet word: Abba, that is, daddy (cf Mk 14: 33-36). In the midst of this test, Jesus teaches us to embrace the Father, because in prayer to Him there is the strength to go on even in pain. In fatigue, prayer is relief, trust, comfort. In the abandonment of all else, in his interior desolation Jesus is not alone, he is with the Father. Instead, in our Gethsemane we often choose to remain alone rather than say Father and entrust ourselves to Him, like Jesus did, to entrust ourselves to his will, which is our true good. But when we are closed in on ourselves in the midst of a test, we dig a tunnel inside, a painful introverted path that has a single direction: more and more deeply in ourselves. The biggest problem is not pain, but how it is dealt with. Solitude offers no way out; prayer is a yes, because it is offered in relationship, in trust. Jesus entrusts everything and entrusts himself to the Father, bringing him what he feels, leaning on him in the midst of his struggle. When we enter our Gethsemane - each of us has our own Gethsemane or has had them or will have them - we need to remember this: when we enter, when we enter our Gethsemane, let us remember to pray like this: Father.

Finally, Jesus addresses a third prayer to his Father for us: Father, forgive them, for they know not what they do (Lk 23:34). Jesus prays for those who have been evil with Him, for his killers. The Gospel specifies that this prayer occurs at the moment of crucifixion. It was probably the moment of the sharpest pain when the nails were driven into Jesus' wrists and feet. Here, at the summit of pain, love reaches its climax: forgiveness comes, that is, the gift of forgiveness to the n-th power, which breaks the circle of evil. Praying the Our Father during these days of the Easter Triduum, we can ask for one of these graces: to live our days for the glory of God, that is to live with love; to know how to entrust ourselves to the Father in times of trial and to say daddy to the Father and to find forgiveness and the courage to forgive in the encounter with the Father. Both things go together. The Father forgives us, but gives us the courage to forgive.

The Holy Father's catechesis was then summarized in various languages, and His Holiness offered greetings to each group of the faithful in attendance.  To French-speaking pilgrims, he said:

I am happy to greet the pilgrims who have come from France and from other francophone countries, especially the pilgrims from Carcassonne, Tournon and Rennes.  During these holy days, may the Lord teach us to live each day for his glory, in other words with love, to entrust ourselves to him in times of trial, to receive his forgiveness and the courage to forgive others.  May God bless you!

I take this occasion to express to the diocesan community of Paris, to all Parisians and to the entire population of France my great affection and my closeness following the fire in Notre-Dame Cathedral.  Dear brothers and sisters, I am very saddened and I feel very close to all of you.  The gratitude of the whole Church goes out to those who have worked hard, even risking their own lives to save the Basilica. May the Blessed Virgin Mary bless them and support the work of reconstruction: may it be a choral work, to the praise and glory of God. God bless you!

To English-speaking pilgrims, he said:

I greet the English-speaking pilgrims and visitors taking part in today’s Audience, especially those from the Netherlands, Australia, the Philippines, Canada and the United States of America. My particular greeting goes to the delegation from the NATO Defense College. May this Holy Week lead us to celebrate the resurrection of the Lord Jesus with hearts purified and renewed by the grace of the Holy Spirit. God bless you all!
at 17:15