At 9:20am this morning local time (3:20am EDT), inside the Vatican Basilica, the Holy Father, Pope Francis presided over the celebration of the Chrism Mass, the liturgy which is celebrated on this day in all Cathedrals throughout the world. 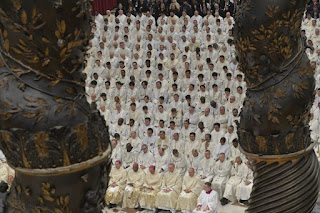 The Mass of Chrism was concelebrated by the Holy Father along with Cardinals, Bishops and Priests (diocesan and religious) who are present in Rome. 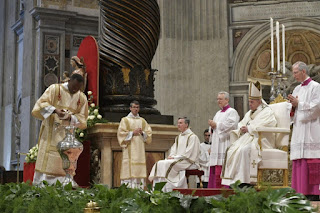 During the Eucharistic celebration, the priests who were present renewed the promises they made on the day of their Ordination, then the oils used for the celebration of Sacraments (the Oil of the Infirmed, the Oil of Catechumens and the Sacred Chrism) were blessed. 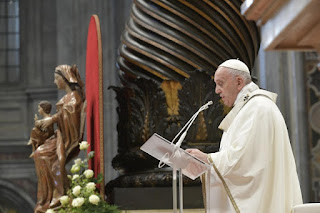 Homily of the Holy Father, Pope Francis
during the celebration of the Chrism Mass

The Gospel of Luke, which we just heard, makes us relive the excitement of that moment when the Lord made his own the prophecy of Isaiah, as he read it solemnly in the midst of his people. The synagogue in Nazareth was filled with his relatives, neighbours, acquaintances, friends … and not only them. All had their eyes fixed on him. The Church always has her eyes fixed on Jesus Christ, the Anointed One, whom the Spirit sends to anoint God’s people.

The Gospels frequently present us with this image of the Lord in the midst of a crowd, surrounded and pressed by people who approach him with their sick ones, who ask him to cast out evil spirits, who hear his teachings and accompany him on the way. My sheep hear my voice. I know them and they follow me (Jn 10:27-28).

The Lord never lost that direct contact with people. Amid those crowds, he always kept the grace of closeness with the people as a whole, and with each individual. We see this throughout his public life, and so it was from the beginning: the radiance of the Child gently attracted shepherds, kings and elderly dreamers like Simeon and Anna. So it was on the cross: his Heart draws all people to himself (Jn 12:32): Veronicas, Cyreneans, thieves, centurions…

The term crowd is not disparaging. Perhaps to some people’s ears, it can evoke a faceless, nameless throng … But in the Gospel we see that when the crowd interacts with the Lord – who stands in their midst like a shepherd among his flock – something happens. Deep within, people feel the desire to follow Jesus, amazement wells up, discernment grows apace.

I would like to reflect with you on these three graces that characterize the relationship between Jesus and the crowd.

The grace of following

Saint Luke says that the crowds looked for Jesus (Lk 4:42) and travelled with him (Lk 14:25). They pressed in on him and surrounded him (Lk 8:42-45); they gathered to hear him (Lk 5:15). Their following is something completely unexpected, unconditional and full of affection. It contrasts with the small-mindedness of the disciples, whose attitude towards people verges on cruelty when they suggest to the Lord that he send them away, so that they can get something to eat. Here, I believe, was the beginning of clericalism: in this desire to be assured of a meal and personal comfort without any concern for the people. The Lord cut short that temptation: You, give them something to eat! was Jesus’ response. Take care of the people!

The grace of amazement

The second grace that the crowd receives when it follows Jesus is that of joy-filled amazement. People were amazed by Jesus (Lk 11:14), by his miracles, but above all by his very person. People loved to meet him along the way, to receive his blessing and to bless him, like the woman in the midst of the crowd who blessed his Mother. The Lord himself was amazed by people’s faith; he rejoiced and he lost no opportunity to speak about it.

The grace of discernment

The third grace that people receive is that of discernment. The crowds found out where Jesus had gone, and followed him (Lk 9:11). They were astounded by his teaching, for he taught them as one having authority (Mt 7:28-29; cf Lk 5:26). Christ, the Word of God who came in the flesh, awakens in people this charism of discernment, which is certainly not the discernment of those who specialize in disputed questions. When the Pharisees and the teachers of the law debated with him, what people discerned was Jesus’ authority, the power of his teaching to touch their hearts, and the fact that evil spirits obeyed him (leaving momentarily speechless those who tried to trap him by their questions; the people liked that; they were able to distinguish this and they liked it).

Let us take a closer look at the way the Gospel views the crowd. Luke points out four large groups who are the preferred beneficiaries of the Lord’s anointing: the poor, the blind, the oppressed and captives. He speaks of them in general terms, but then we are glad to see that, in the course of the Lord’s life, these anointed ones gradually take on real names and faces. When oil is applied to one part of the body, its beneficial effect is felt throughout the entire body. So too, the Lord, taking up the prophecy of Isaiah, names various crowds to whom the Spirit sends him, according to what we may call an inclusive preferentiality: the grace and the charism given to one individual person or a particular group then redounds, like every action of the Spirit, to the good of all.

The poor (in Greek, ptochoi) are those who are bent over, like beggars who bow down and ask for alms. But poor too (ptochè) was that widow who anointed with her fingers the two small coins which were all she had to live on that day. The anointing by the widow to give alms went unnoticed by the eyes of all except Jesus, who looks kindly on her lowliness. Through her, the Lord can accomplish fully his mission of proclaiming the Gospel to the poor. Paradoxically, the disciples heard the good news that people like her exist. She – the generous woman – could not imagine that she would make it to the Gospel, that her simple gesture would be recorded in the Gospel. Like all those men and women who are the saints next door, she lives interiorly the joyful fact that her actions carry weight in the Kingdom, and are worth more than all the riches of the world.

The blind are represented by one of the most likable figures in the Gospel: Bartimaeus (cf Mt 10:46-52), the blind beggar who regained his sight and, from that moment on, only had eyes to follow Jesus on his journey. The anointing of the gaze! Our gaze, to which the eyes of Jesus can restore the brightness which only gratuitous love can give, the brightness daily stolen from us by the manipulative and banal images with which the world overwhelms us.

To refer to the oppressed (in Greek, tethrausmenoi), Luke uses a word that contains the idea of trauma. It is enough to evoke the parable – perhaps Luke’s favourite – of the Good Samaritan, who anoints with oil and binds the wounds (traumata: Lk 10:34) of the man who had been beaten by robbers and left lying at the side of the road. The anointing of the wounded flesh of Christ! In that anointing we find the remedy for all those traumas that leave individuals, families and entire peoples ignored, excluded and unwanted, on the sidelines of history.

The captives are prisoners of war (in Greek, aichmalotoi), those who had been led at the point of a spear (aichmé). Jesus would use the same word in speaking of the taking of Jerusalem, his beloved city, and the deportation of its people (Lk 21:24). Our cities today are taken prisoner not so much at spear point, but by more subtle means of ideological colonization.

Only the anointing of culture, built up by the labour and the art of our forebears, can free our cities from these new forms of slavery.

As for us, dear brother priests, we must not forget that our evangelical models are those people, the crowd with its real faces, which the anointing of the Lord raises up and revives. They are the ones who complete and make real the anointing of the Spirit in ourselves; they are the ones whom we have been anointed to anoint. We have been taken from their midst, and we can fearlessly identify with these ordinary people. Each of us has our own story. A little bit of memory will do us much good. They are an image of our soul and an image of the Church. Each of them incarnates the one heart of our people.

We priests are the poor man and we would like to have the heart of the poor widow whenever we give alms, touching the hand of the beggar and looking him or her in the eye. We priests are Bartimaeus, and each morning we get up and pray: Lord, that I may see. We priests are, in some point of our sinfulness, the man beaten by the robbers. And we want first to be in the compassionate hands of the good Samaritan, in order then to be able to show compassion to others with our own hands.

I confess to you that whenever I confirm and ordain, I like to smear with chrism the foreheads and the hands of those I anoint. In that generous anointing, we can sense that our own anointing is being renewed. I would say this: We are not distributors of bottled oil. We have been anointed to anoint. We anoint by distributing ourselves, distributing our vocation and our heart. When we anoint others, we ourselves are anointed anew by the faith and the affection of our people. We anoint by dirtying our hands in touching the wounds, the sins and the worries of the people. We anoint by perfuming our hands in touching their faith, their hopes, their fidelity and the unconditional generosity of their self-giving, which many significant figures describe as superstition.

The one who learns how to anoint and to bless is thus healed of meanness, abuse and cruelty.

Let us pray, dear brothers; being with Jesus in the midst of our people is the most beautiful place to be. May the Father renew deep within us the Spirit of holiness; may he grant that we be one in imploring his mercy for the people entrusted to our care and for all the world. In this way, the multitude of the peoples, gathered in Christ, may become the one faithful people of God, which will attain its fullness in the Kingdom (cf Prayer of Priestly Ordination).