General Audience: Forgive us our sins

This morning's General Audience began at 9:15am local time (3:15am EDT) in Saint Peter's Square, where the Holy Father met with groups of pilgrims and the faithful from Italy and from every corner of the world.

In his speech, His Holiness continued the cycle of teachings on the Our Father, focusing his meditation on the phrase: Forgive us our sins (Jn 1:8-9). 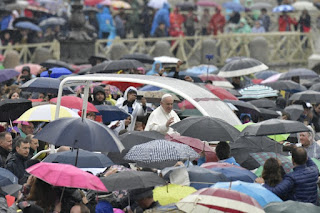 Dear brothers and sisters, good morning!
This is not such a beautiful day, but good morning all the same!

After asking God for our daily bread, the prayer of the Our Father enters the field of our relationships with others. And Jesus teaches us to ask the Father: Forgive us our trespasses, as we forgive those who trespass against us (Mt 6,12). Just as we need bread, so we need forgiveness. And we need it every day.

The Christian who is praying asks God first of all for forgiveness of his debts, that is, his sins, the bad things he does. This is the first truth of every prayer: so that we can also be perfect people, so that we can also be crystalline saints who never deflect from a life of goodness, so that we can always be children who owe everything to the Father. Which is the most dangerous attitude of every Christian life? It is pride. It is the attitude of those who stand before God thinking they always have their affairs in order with Him: the proud man believes that he has everything in place. Like that Pharisee in the parable, who - in the temple - thinks he is praying but actually praises himself before God: I thank you, Lord, that I am not like everyone else. And people who feel perfect, the people who criticize others, are proud people. None of us is perfect, nobody. On the contrary, the tax collector, who was in the temple, a sinner despised by all, stopped on the threshold of the temple, and did not feel worthy to enter; he entrusted himself to the mercy of God. And Jesus commented: This one, unlike of the other, returned home justified (Lk 18:14), that is forgiven, saved. Why? Because he was not proud, because he recognized his limitations and his sins.

There are sins that are seen and sins that are not seen. There are glaring sins that make noise, but there are also devious sins, which lurk in the heart without us even realizing it. The worst of these is the arrogance that can infect even people who live an intense religious life. Once upon a time there was a convent of nuns, during the years 1600-1700, famous, at the time of Jansenism: they were perfect and it was said of them that they were as pure as the angels, but superb as the demons. It's a bad thing. Sin divides fraternity, sin makes us presume to be better than others, sin makes us believe that we are similar to God.

And standing before God we are all sinners and we have a reason to beat our breasts - everyone! - like that publican at the temple. Saint John, in his first Letter, writes: If we say we have no sin, we deceive ourselves and the truth is not in us (1 Jn 1: 8). If you want to deceive yourself, say that you have not sinned: for in this way, you are deceiving yourself.

We are indebted above all because in this life we have received so much: existence, a father and a mother, friendship, the wonders of creation ... Even if we all go through difficult days, we must always remember that life is filled with grace, it is the miracle that God has created out of nothing.

Secondly we are indebted because, even if we succeed in loving others, none of us is able to do this by means of his own strength. True love is when we can love, but with the grace of God. None of us shines with our own light. There is what the ancient theologians called a mysterium lunae not only in the identity of the Church, but also in the history of each of us. What does this mysterium lunae mean? Which is like the moon, which has no light of its own: it reflects the light of the sun. We too have no light of our own: the light we have is a reflection of the grace of God, of the light of God. If you love, it is because someone other than you smiled at you when you were a child, teaching you to respond with a smile. If you love it is because someone next to you has awakened you to love, making you understand how within the gift of love resides the sense of existence.

Let's try to listen to the story of some person who has made a mistake: a prisoner, a convict, a drug addict ... we know so many people who make mistakes in life. Without prejudice to the responsibility, which is always personal, you sometimes ask yourself who should be blamed for his mistakes, if not his conscience, or the story of hatred and abandonment that someone carries with him.

How can we fail to recognize, in the chain of love that precedes us, also the providential presence of the love of God?  None of us can ever love God as much as He loves us.  It is enough for us to place ourselves before him who is hanging on a cross in order to grasp the disproportion: He loved us and will always love us first.

Therefore, let us pray:  Lord, even the holiest person among us is always in your debt.  O Father, have mercy on all of us!

The Holy Father's catechesis was then summarized in various languages, and His Holiness offered particular greetings to each group of the faithful in attendance.  To English-speaking visitors, he said:

I greet the English-speaking pilgrims and visitors taking part in today’s Audience, especially those from England, Ireland, Belgium, Denmark, Norway, Australia, Sri Lanka and the United States of America. May the Lenten journey bring us to Easter with hearts purified and renewed by the grace of the Holy Spirit. Upon you and your families I invoke joy and peace in Christ our Redeemer!
at 15:50