Council of Cardinals in 29th session 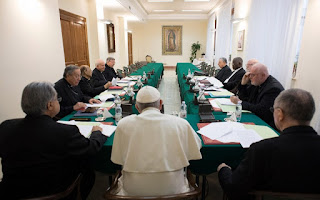 At 1:00pm today (7:00am EDT), the interim Director of the Holy See Press Centre, Alessandro Gisotti, held a briefing regarding the XXIX meeting of the Cardinal Consultors with the Holy Father, Pope Francis.

As usual, the Holy Father participated in the working sessions, except for this morning while he was present at the General Audience.

The working sessions took place in the mornings from 9:00am until 12:30pm and in the afternoons from 4:30pm until 7:00pm.  During the meeting, the procedure for consultation on the new Apostolic Constitution was finalized, whose provisional title - as is known - is Praedicate Evangelium. The draft, approved by the Council of Cardinals, will now be sent to the Presidents of the National Episcopal Conferences, to the Synods of the Eastern Churches, to the Dicasteries of the Roman Curia, to the Conferences of Superiors and Major Superiors and to some Pontifical Universities who will be asked to send comments and suggestions.

Other topics addressed during the working sessions include: the missionary orientation that the Curia must increasingly take in the light of the new Apostolic Constitution, the commitment to strengthen the process of synodality in the Church at all levels and the need for a greater presence of women in leadership roles in the various organizations of the Holy See. It was also reiterated that the Council of Cardinals is a body that has the task of helping the Holy Father in the governance of the universal Church and therefore its function does not end with the publication of the Apostolic Constitution.

On Tuesday, 9 April, Cardinal Seán Patrick O'Malley outlined for the Pope and the other members of the Council, the work of the Plenary session of the Pontifical Council for the Protection of Minors, which took place last week.  Cardinal O'Malley thanked the Pope for the meeting which took place last February at the Vatican, entitled: The protection of minors in the Church, as well as the recent publication of the norms for the Vatican City State, which reinforce the commitment of the Church against every form of abuse of minors and vulnerable adults.