A meeting with the Nuncios 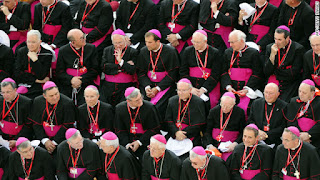 Pope Francis has convened a Meeting of the Pontifical Representatives to take place in the Vatican this upcoming 12 to 15 June. The Holy Father desires to consolidate the triennial recurrence of these meetings after those which took place in 2013 and 2016. The preparation and coordination of this Meeting was entrusted by the Holy Father to the Section of the Secretariat of State for the Diplomatic Staff of the Holy See.

In addition to two meetings with the Superiors of the Secretariat of State, the programme includes several conferences to update the participants on current ecclesial matters, international collaboration and interreligious dialogue. Several work sessions will take place in continental groups. Other meetings are also planned with the Heads of Dicasteries of the Roman Curia and with the Ambassadors accredited to the Holy See resident in Rome.

The Meeting will also contain some particularly significant spiritual moments. Among these, on the morning of 15 June, the Holy Father will preside over the Eucharistic Celebration in the Chapel of the Domus Sanctae Marthae. Cardinal Pietro Parolin will preside over the opening Mass on 12 June; there will also be other moments of prayer for the participants in the Sistine Chapel. The event will conclude with lunch, in the presence of the Holy Father, with all participants present on 15 June, at the Domus Sanctae Marthae.
at 10:20