This morning's General Audience began at 9:10am in Saint Peter's Square where the Holy Father, Pope Francis met with groups of pilgrims and the faithful from Italy and from every corner of the world.

In his speech, the Pope added a meditation on his recent Apostolic voyage to Romania which concluded on Sunday (Heb 12:1-2a). 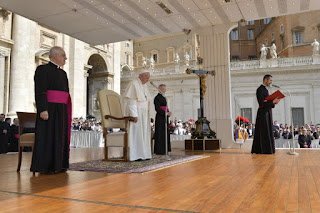 This past weekend, I completed an Apostolic voyage in Romania, having been invited by the President and by the Prime Minister of that country.  I renew my thanks to them my gratitude and I extend to the other civil and ecclesial authorities and to all those who worked together to accomplish this visit.  Above all, I give thanks to God who allowed the Successor of Peter to return to that country, twenty years after the visit of Saint John Paul II.

In summary, as the motto of the Journey announced, I urged everyone to walk together. And it is my joy to be able to do so not from afar, or from above, but by walking among the Romanian people, as a pilgrim in their land.

As Christians, we have the grace to live a season of fraternal relations between the different Churches. In Romania most of the faithful belong to the Orthodox Church, currently led by Patriarch Daniel, to whom my fraternal and grateful thought goes out. The Catholic community, both Greek and Latin, is alive and active. The union between all Christians, although incomplete, is based on the one baptism and is sealed by the blood and suffering that they have experienced together in the dark times of persecution, particularly during the last century under the atheistic regime. There is also a Lutheran community that also professes faith in Jesus Christ, and that community is on good terms with Orthodox and Catholics.

With the Patriarch and the Holy Synod of the Romanian Orthodox Church we had a very cordial meeting, in which I reiterated the Catholic Church's desire to walk together in reconciled memory and towards fuller unity, which the Romanian people invoked prophetically during the visit of Saint John Paul II. This important ecumenical dimension of the journey culminated in the solemn Prayer of the Our Father, inside the new, imposing Orthodox cathedral of Bucharest. This was a moment of strong symbolic value, because the Our Father is the Christian prayer par excellence, the common heritage of all the baptized. No one can say my Father and your Father; no, we must say: Our Father, the common heritage of all the baptized. We have shown that unity does not take away legitimate diversity. May the Holy Spirit lead us to live ever more as children of God and brothers and sisters among us.

As a Catholic Community we celebrated three Eucharistic Liturgies. The first in the Cathedral of Bucharest, on May 31, the Feast of the Visitation of the Virgin Mary, an icon of the Church on a journey of faith and charity. The second Eucharist in the Shrine of Şumuleu Ciuc, the destination of many pilgrims. There, the Holy Mother of God gathers the faithful people in the variety of languages, cultures and traditions. And the third celebration was the Divine Liturgy in Blaj, the centre of the Greek-Catholic Church in Romania, with the beatification of seven Greek-Catholic Catholic bishops, witnesses of the freedom and mercy that come from the Gospel. One of these new blesseds, His Excellency, Iuliu Hossu, wrote during his imprisonment: God sent us into this darkness of suffering to forgive and pray for the conversion of all. Thinking of the terrible tortures to which they were subjected, these words are a testimony of mercy.

Particularly intense and festive was the meeting with young people and families, held in Iaşi, an ancient city and an important cultural centre, a crossroads between the West and the East. A place that invites you to open roads on which to walk together, in the richness of diversity, in a freedom that does not cut the roots but draws you in a creative way. This meeting also had a Marian character and ended with the entrusting of young people and families to the Holy Mother of God.

The last stop on the journey was a visit to the Rom community of Blaj. In that city the Roms are very numerous, and for this I wanted to greet them and renew the appeal against all discrimination and for the respect of people of any ethnicity, language and religion.

Dear brothers and sisters, let us thank God for this Apostolic voyage, ad let us ask Him, through the intercession of the Virgin Mary, that this voyage may bear abundant fruit for Romania and for the Church in that land.
Original text in Italian

The Holy Father's catechesis was then summarized and His Holiness offered particular greetings to each group of pilgrims in attendance.  To English-speaking visitors, he said:

I greet the English-speaking pilgrims and visitors taking part in today’s Audience, especially those from England, Scotland, Malta, China, Japan, Malaysia, Korea, Canada and the United States of America. I offer a special greeting to the members of the United Nations Women’s Guild of Rome together with my prayerful good wishes for their fiftieth anniversary. As we prepare to celebrate the Solemnity of Pentecost, I invoke upon all of you and your families a rich outpouring of the gifts of the Holy Spirit.
at 08:02