This afternoon, at 5:10pm local time (10:10am EDT), the Holy Father, Pope Francis arrived at the airport in Sibiu, where there was a ceremony held to mark his departure from Romania.

Upon his arrival, the Pope was welcomed by the President of Romania, Mister Klaus Werner Iohannis, and by his wife at the entrance to the VIP Room where they held a private meeting for a few moments.  Then, after having inspected the Guard of Honour and after having taken time for members of the respective delegations to greet one another, Pope Francis boarded the TAROM B737/800 for his return flight to Italy.

The aircraft carrying the Pope on the return journey from his Apostolic voyage to Romania departed from the airport in Sibiu at 5:42pm (10:42am EDT) and landed at Rome's Ciampino airport at 6:10pm (12:10pm EDT). 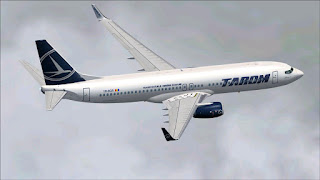 Immediately after departing the airport in Sibiu, the Holy Father, Pope Francis sent the following telegram to the President of Romania, Mister Klaus Werner Iohannis:

As I leave Romania, I wish to express my deep gratitude to Your Excellency, the government and all the people of Romania for your cordial welcome and generous hospitality.  With the assurance of my prayers, I invoke upon the nation the abundant blessings of Almighty God.

During the flight from Sibiu to Rome, while flying above Serbia, Montenegro, Bosnia and Herzegovina and Croatia, and finally arriving in Italian airspace, the Pope sent the following telegrams to the respective Heads of State.

While flying over Serbia

His Excellency, Aleksandar Vučić
President of the Republic of Serbia
Belgrade

On my return journey to Rome from Romania, I once again offer to Your Excellency and the Serbian people the assurance of my prayers and best  wishes.

While flying over Montenegro

As my return flight from Romania takes me over Montenegro, I once again send cordial greetings to Your Excellency and your fellow citizens and assure you of my prayers.

While flying over Bosnia and Herzegovina

His Excellency, Milorad Dodik
Chairman of the Presidency of Bosnia and Herzegovina
Sarajevo

On my return journey to Rome, I pray that you and all the people of Bosnia and Gerzegovina may be filled with the abundant blessings of Almighty God.

While flying over Croatia

Her Excellency, Kolinda Grabar-Kitarović
President of the Republic of Croatia
Zagreb

Returning to Rome at the conclusion of my visit to Romania, I once again express my cordial best wishes to Your Excellency and the people of Croatia.  With the assurance of my prayers, I gladly invoke upon all of you Almighty God's blessings of peace and love.

Returning from the Apostolic voyage that took me to the land of Romania, I wish to renew to you, Mister President, and to the beloved Italian nation, my cordial greetings, while invoking upon all of you the blessings of the Lord.