This morning, after having departed the Apostolic Nunciature, the Holy Father, Pope Francis travelled by car to the airport in Bucarest and, at 9:00am local time (2:00am EDT) - aboard a TAROM B737/800 - he departed en rout to Sibiu.  Upon his arrival, at 9:30am local time (2:30am EDT), the Pope was welcomed there by the Mayor, the President of the Region and the Prefect.  Then, he departed and travelled by car to Blaj. 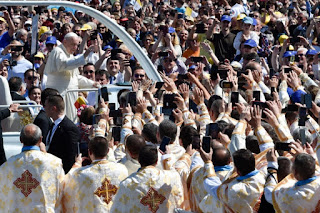 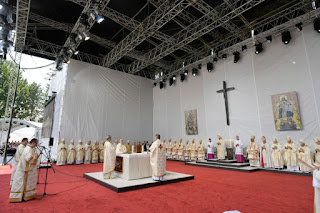 At 11:10am local time (4:10am EDT), the Pope presided over the Divine Liturgy in the presence of approximately 6,000 faithful and pilgrims.  Another 20,000 persons followed the Eucharistic celebration on jumbotrons which had been erected in some of the squares throughout Blaj.

Among the civil authorities who were present at the Divine Liturgy, there was the President of Romania, His Excellency, Mister Klaus Werner Iohannis; the Prime Minister, Ms. Viorica Dăncilă; some exponents from the Romanian government and the Mayor of the city. 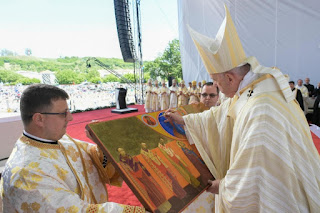 Following the prayer of blessing and consecration of the icons of the new Blesseds, His Beatitude, Cardinal Lucian Mureşan offered a few words of thanks to the Holy Father.

During the Eucharistic celebration, after the proclamation of the gospel, the Pope delivered his homily.  Then, prior to the recitation of the Regina Coeli, His Beatitude, Cardinal Lucian Mureşan, offered a silver case containing some relics of the new Blesseds and their icon to the Holy Father as a gift on behalf of the Romanian Greek-Catholic Church.

Before the final blessing, the Holy Father led the recitation of the Regina Coeli.

At the conclusion of the Divine Liturgy, Pope Francis travelled by car to the Curial Palace in Blaj where he ate lunch with the Papal party. 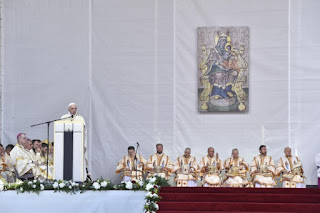 Homily of the Holy Father, Pope Francis
for the Divine Liturgy

Rabbi, who sinned, this man or his parents, that he was born blind? (cf. Jn 9:2). The disciples’ question to Jesus triggers a series of actions and events that will accompany the entire Gospel account and clearly reveal what really blinds the human heart.

Jesus, like his disciples, sees the man blind from birth. He acknowledges him and gives him his full attention. After making it clear that the man’s blindness was not the result of sin, he mixes dirt with his saliva and smears it on the man’s eyes. Then he tells him to wash in the pool of Siloam. After washing, the man blind from birth recovers his sight. It is significant that the miracle is recounted in just two verses; everything else has to do, not with the blind man who has recovered his sight, but with the arguments that followed his healing. It seems that his life and especially the story of his cure are of little interest, except as an occasion of debate, irritation and anger. The man healed of his blindness is questioned first by the astonished crowd, then by the Pharisees, who also interrogate his parents. They question the identity of the man who was healed; then they deny the act of God, with the excuse that God does not work on the Sabbath. They even go so far as to doubt that the man was actually born blind.

The whole scene and the arguments that follow show how hard it is to understand the actions and priorities of Jesus, who brings someone from the periphery into the centre. It is particularly hard for people who think that “the Sabbath” is more important than the love of the Father who wills all people to be saved (cf 1 Tim 2:4). The blind man had to live not only with his own blindness, but also with the blindness of those around him. We see the resistance and the hostility that can arise in the human heart when, instead of putting people at the centre, we put special interests, labels, theories, abstractions and ideologies, which manage only to blind everything around them. The Lord’s approach is different: far from hiding himself behind inaction or ideological abstractions, he looks people in the eye. He sees their hurts and their history. He goes out to meet them and he does not let himself be sidetracked by discussions that fail to prioritize and put at the centre what is really important.

These lands know well how greatly people suffer when an ideology or a regime takes over, setting itself up as a rule for the very life and faith of people, diminishing and even eliminating their ability to make decisions, their freedom and their room for creativity (cf Laudato Si’, 108). Brothers and sisters, you were forced to endure a way of thinking and acting that showed contempt for others and led to the expulsion and killing of the defenceless and the silencing of dissenting voices. I think in particular of the seven Greek-Catholic Bishops whom I have had the joy of beatifying. In the face of fierce opposition from the regime, they demonstrated an exemplary faith and love for their people. With great courage and interior fortitude, they accepted harsh imprisonment and every kind of mistreatment, in order not to deny their fidelity to their beloved Church. These pastors, martyrs for the faith, re-appropriated and handed down to the Romanian people a precious legacy that we can sum up in two words: freedom and mercy.

With regard to freedom, I cannot help but note that we are celebrating this Divine Liturgy in the Field of Liberty. This place, filled with meaning, evokes the unity of your people, which is found in the diversity of its religious expressions. All these things constitute a spiritual patrimony that enriches and distinguishes Romanian culture and national identity. The new Beati endured suffering and gave their lives to oppose an illiberal ideological system that oppressed the fundamental rights of the human person. In that tragic period, the life of the Catholic community was put to a harsh test by a dictatorial and atheistic regime. All the Bishops and faithful of the Greek-Catholic Church and those of the Latin-rite Catholic Church were persecuted and imprisoned.

The other aspect of the spiritual legacy of the new Beati is mercy. Their tenacity in professing fidelity to Christ was matched by their readiness to suffer martyrdom without showing hatred towards their persecutors and indeed responding to them with great meekness. The words spoken by Bishop Iuliu Hossu during his imprisonment are eloquent: “God has sent us into this darkness of suffering in order to offer forgiveness and to pray for the conversion of all”. These words are the symbol and synthesis of the attitude with which these Beati, at the time of testing, sustained their people in confessing the faith without compromise or retaliation. The mercy they showed to their tormentors is a prophetic message, for it invites everyone today to conquer anger and resentment by love and forgiveness, and to live the Christian faith with consistency and courage.

Dear brothers and sisters, today, too, we witness the appearance of new ideologies that quietly attempt to assert themselves and to uproot our peoples from their richest cultural and religious traditions. Forms of ideological colonization that devalue the person, life, marriage and the family (cf Amoris Laetitia, 40), and above all, with alienating proposals as atheistic as those of the past, harm our young people and children, leaving them without roots from which they can grow (cf Christus Vivit, 78). Everything then becomes irrelevant unless it serves our immediate interests; people are led to take advantage of others and treat them as mere objects (cf. Laudato Si’, 123-124). Those voices, by sowing fear and division, seek to cancel and bury the best that the history of these lands have bequeathed to you. Regarding this legacy, I think, for example, of the Edict of Torda in 1568, which forbade all forms of radicalism and was one of the first in Europe to promote an act of religious tolerance.

I would like to encourage you to bring the light of the Gospel to our contemporaries and to continue, like these Beati, to resist these new ideologies now springing up. It is our turn to struggle now, as it was theirs to struggle in their time. May you be witnesses of freedom and mercy, allowing fraternity and dialogue to prevail over divisions, and fostering the fraternity of blood that arose in the period of suffering, when Christians, historically divided, drew closer and more united to one another. Dear brothers and sisters, may the maternal protection of the Virgin Mary, the Holy Mother of God, and the intercession of the new Beati accompany you on your journey.
Original text in Italian
Texte en français


Greetings of the Holy Father, Pope Francis
prior to the recitation of the Regina Coeli

Before concluding this Divine Liturgy, I want once again to greet all of you and all those whom I have met in the course of these days. I thank you for your warm welcome. I offer a respectful greeting to the President of the Republic and to the Authorities present here. I express my heartfelt gratitude for their generous cooperation in the planning and the unfolding of my visit. I am grateful to His Beatitude Patriarch Daniel, to the Holy Synod, and to the clergy and faithful of the Romanian Orthodox Church for their fraternal welcome. May the Lord bless this ancient and illustrious Church and sustain it in its mission.[Applause] A fraternal applause for them all!

I also offer a greeting full of affection and gratitude to His Beatitude Cardinal Lucian Mureşan. I greet the faithful of the Catholic Church: the Bishops, priests, religious and lay faithful of Bucharest and Iaşi, together with the many pilgrims from Şumuleu Ciuc. I thank the Lord for giving me the opportunity to pray with you and to encourage your commitment to evangelization and your witness of charity. Here in Blaj, the land of martyrdom, freedom and mercy, I pay tribute to you, the sons and daughters of the Greek-Catholic Church, who for three centuries have borne witness to your faith with apostolic zeal.

May the Virgin Mary bestow her maternal protection upon all the citizens of Romania who in the course of history have always trusted in her intercession. In entrusting all of you to her, I ask her to guide you on your journey of faith, as you advance towards a future of authentic progress and peace, and contribute to the building of an ever more just, harmonious and fraternal homeland.