General Audience: Jesus' and the eleven

This morning's General Audience began at 9:10am local time (3:10am EDT) in Saint Peter's Square, where the Holy Father, Pope Francis met with groups of pilgrims and the faithful from Italy and from every other part of the world.

In his speech, the Pope continued the new cycle of catecheses on the Acts of the Apostles, adding his meditation on the theme: He was associated with the eleven apostles (Acts 1:21-22, 26). 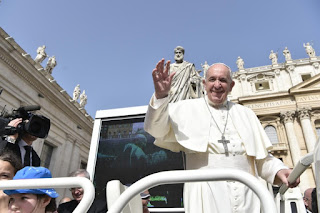 We have begun a journey of catechesis that will follow the journey: the journey of the gospel narrated by the book of the Acts of the Apostles, because this book certainly shows the journey of the gospel, how the gospel has gone beyond, beyond, beyond ... Everything starts with the Resurrection of Christ. This, in fact, is not one event among others, but it is the source of new life. The disciples know this and - obedient to Jesus' command - they remain united, united and persevering in prayer. They huddle around Mary, the Mother, and they prepare to receive the power of God not in a passive way, but consolidating the communion between them.

That first community was formed by 120 brothers and sisters more or less: a number that carries within itself the 12, emblematic of Israel, because it represents the twelve tribes, and emblematic of the Church, because of the twelve Apostles chosen by Jesus. Now, after the painful events of the Passion, the Lord's Apostles are no longer twelve, but eleven. One of them, Judas, is no longer there: he has taken his life, having been crushed by remorse.

He had already begun to separate himself from communion with the Lord and with others, to do alone, to isolate himself, to cling to money to the point of exploiting the poor, to lose sight of the horizon of gratuitousness and self-giving, to the point of allowing the pride virus to infect his mind and heart, transforming him from a friend (Mt 26,50) into an enemy and into the leader of those who arrested Jesus (Acts 1:16). Judas had received the great grace of being part of the group of intimate people of Jesus and of participating in his own ministry, but at a certain point he pretended to save his own life with the result was that he lost it (cf Lk 9:24 ). He had ceased to belong to Jesus with his heart and had placed himself outside of communion with him and his own. He stopped being a disciple and placed himself above the Master. He sold Jesus and with the price of his crime he bought land, which produced no fruit but was imbued with his own blood (cf Acts 1: 18-19).

If Judas preferred death to life (cf Dt 30:19; Sir 15.17) and followed the example of the wicked whose way is like darkness and leads to ruin (cf Pr 4.19; Ps 1, 6), the Eleven instead choose life and blessing, they become responsible for making this choice flow in history, from generation to generation, from the people of Israel to the Church.

The evangelist Luke shows us that in the face of the abandonment of one of the Twelve, who created a wound in the community body, it is necessary that his assignment was passed to another. And who should they hire? Peter indicates the requirement: the new member must have been a disciple of Jesus from the beginning, that is, from baptism in the Jordan, to the end, that is, to the moment of Jesus' ascension to Heaven (cf Acts 1: 21-22). The group of the Twelve needed to be reconstituted. At this point the practice of community discernment was inaugurated, which consists in seeing reality with the eyes of God, in the perspective of unity and communion.

There were two candidates: Joseph Barsabbas and Mathias. Then the whole community prayed as follows: You, Lord, who know the hearts of all, show which of these two you have chosen to take the place ... which Judas has abandoned (Acts 1:24-25). And, by fate, the Lord indicated Mathias, who was associated with the Eleven. Thus the body of the Twelve was re-established, a sign of communion, and communion wins over division, isolation, the mentality that absolutizes the private space, a sign that communion is the first witness that the Apostles offer. Jesus had said it: By this all men will know that you are my disciples: if you have love for one another (Jn 13:35).

The Twelve manifested the style of the Lord in the Acts of the Apostles. They were the accredited witnesses of Christ's work of salvation and did not manifest their presumed perfection to the world but, through the grace of unity, they brought out an Other who now lives in a new way among his people. And who is this? It is the Lord Jesus. The Apostles chose to live under the lordship of the Risen One in unity among the brothers, which became the only possible atmosphere of the authentic gift of self.

We too need to rediscover the beauty of witnessing to the Risen Christ, emerging from self-referential attitudes, renouncing holding back the gifts of God and not yielding to mediocrity. The reunification of the apostolic college shows how in the DNA of the Christian community there is unity and freedom from oneself, which allows us not to fear diversity, not to attach ourselves to things and gifts and to become martyrs, that is luminous witnesses of God alive and active in history.
Original text in Italian

The Holy Father's catechesis was then summarized in various languages and His Holiness offered greetings to each group of the faithful in attendance.  To English-speaking visitors, he said:

I welcome all the English-speaking pilgrims and visitors taking part in today’s Audience, especially those from England, Ireland, Finland, Australia, Hong Kong, Korea, Indonesia, the Philippines, Sri Lanka, Taiwan, Vietnam and the United States of America. I offer a special greeting to the Divine Word Missionaries from Indonesia and the interreligious delegation from Hong Kong, led by Cardinal John Tong Hon. Upon all of you I invoke the joy and peace of our Lord Jesus Christ.

Upon all of you I invoke the joy and peace of our Lord Jesus Christ. God bless you!
at 08:32