Greetings for those who help the Eastern Church

At 11:15am this morning, in the Consistory Hall at the Vatican Apostolic Palace, the Holy Father, Pope Francis received in audience those who are participating in a Meeting of the group known as Aid to the Eastern Churches.  They are in Rome on the occasion of the 92nd Plenary Assembly of the ROACO. 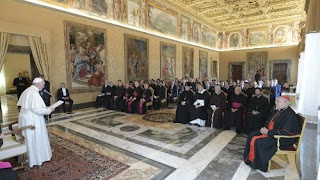 Greetings of the Holy Father, Pope Francis
offered to members of Aid to the Eastern Churches

I am pleased to welcome you at the beginning of the work during the 92nd Plenary Assembly of the ROACO.  I greet Cardinal Leonardo Sandri and I thank him for the words he has offered, and with him, I also greet all the staff and you, members of the Agency who have gathered from all over the world, all of you having at heart the present and the future of the Eastern Catholic Churches.

Since our last meeting, for me too there have been several occasions to meet realities linked to the work of the Congregation and each of you: I am thinking of the recent Apostolic Journeys in Bulgaria, Northern Macedonia and Romania, but above all, I am thinking of the great day of prayer and dialogue with my brothers, the Patriarchs of the Middle East, last 7 July in Bari.

In recent days, the interventions of the Pontifical Representatives in some Countries, as well as the comments of the Speakers who have been chosen, will help you to listen to the cry of many who in these years have been robbed of hope: I think with sadness, once again, of the drama in Syria and the dense clouds that seem to thicken over that country in some areas that are still unstable and where the risk of an even greater humanitarian crisis remains high. Those who have no food, those who do not have medical care, those who have no school, orphans, the wounded and widows raise their voices up high. If the hearts of men are insensitive, this is not the case with God, wounded by the hatred and violence that can be unleashed among his creatures, he is always able to be moved and to take care of them with the tenderness and strength of a father who protects and guides his children. But sometimes I also think of the wrath of God that will be unleashed against the leaders of countries that talk about peace and at the same time, sell weapons to create these wars. This hypocrisy is a sin.

An insistent thought accompanies me thinking of Iraq - where I have the will to go next year - so that I can look ahead through the peaceful and shared participation toward the construction of the common good of all the religious components of society, and does not fall into tensions which come from the never-ending conflicts of regional powers. And I cannot forget Ukraine, so that its population can find peace, whose wounds caused by the conflict I have tried to alleviate with the charitable initiative to which many ecclesial realities have contributed. In the Holy Land, I hope that the recent announcement of a second phase of study of the restoration of the Holy Sepulchre, which sees the Christian communities of the status quo side by side, will be accompanied by the sincere efforts of all local and international actors for a peaceful prospect of soon living together in respect to all those who live in that land, a sign to all people of the blessing of the Lord.

People on the run cry out from ships in search of hope, not knowing which ports will be able to receive them, but in Europe many open ports to boats that have to load sophisticated and expensive weapons, capable of producing devastation from which not even children are spared. This is the hypocrisy of which I spoke. We are aware here that Abel's cry rises up to God, as we remembered in Bari a year ago, praying together for the faithful of the Middle East.

Together with the lament and the weeping, you will also hear in these days voices of hope and consolation: they are the echoes of that tireless work of charity that is made possible also through each of you and the organisms you represent. You manifest the face of the Church and contribute to making it alive, in particular by nurturing hope for younger generations. Young people have the right to be heard announcing the fascinating and demanding word of Christ and, as we had the opportunity to share during the Assembly of the Synod of Bishops last October, when they meet an authentic and credible witness they are not afraid to follow him and to question themselves concerning their vocation. Please continue and increase your commitment because in countries and in the situations you support, young people can grow in humanity, free from ideological colonization, with open hearts and minds, appreciating their national and ecclesial roots and desiring a future of peace and prosperity, which leaves no one behind and no one discriminated against. This year, the young people of Ethiopia and Eritrea - after the long-awaited peace between the two countries - abandoning their arms, can hear the words of the Psalm: You have changed my lament in dance (Ps 30,12). I am sure that young people feel the strong reference to that sincere and respectful fraternity of each, which we recalled with the document signed in Abu Dhabi together with the Great Imam of Al-Ahzar. Help me to make it known and to spread that good alliance for the future of humanity contained in it. And let us all commit ourselves to preserving those realities that have been living the message for years, with particular attention to educational institutions, schools and universities, especially precious species in Lebanon and throughout the Middle East, authentic laboratories of coexistence and gymnasia of humanity which all can easily access.

I thank you for what you are doing.  I am praying for you.  And you, please, continue to pray for me.  Thank you.
Original text in Italian
at 12:22