Collection for the needs of Christians in the Holy Land

This morning, the Holy See Press Centre published the text of a letter sent by Cardinal Leonardo Sandri, Prefect of the Congregation for Oriental Churches - dated 6 March 2019 - to all Bishops throughout the world in which he provides details about this year's collection for the needs of the Christians in the Holy Land. 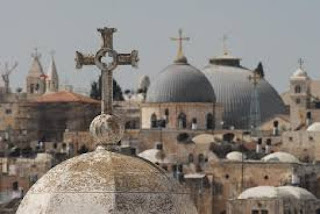 The centre of the entire liturgical year is Holy Week, which begins at Bethphage, with the entrance of Jesus into Jerusalem. We follow Him to Bethany and are present at the anointing with the perfume of nard, a prophecy of His passion, death and resurrection. In the Upper Room, He offers Himself for us, in the bread and wine, and He washes our feet, teaching us humble service as the new commandment of love. We live His arrest in Gethsemane and follow Him from afar with all our fragility, like Peter who denies him. Under the cross, with Mary and the beloved disciple we are present at His death, contemplating His pierced side. Laid at last in that sepulchre, where Mary Magdalene comes on Easter morning, He rises again, and with His light caressing our eyes and our hearts, invites us to look into the history of the world and our personal histories with new hope.

Reliving the mysteries of our salvation, we think with greater intensity of our brothers and sisters who live the faith and witness to Christ who died and rose in the Holy Land, and we express our solidarity with them through acts of charity. In his first general audience on 27 March 2013, Pope Francis recalled to the pilgrims: Living Holy Week, following Jesus means learning to come out of ourselves ... in order to go to meet others, to go towards the outskirts of existence, to be the first to take a step towards our brothers and our sisters.

This year, together with the invitation of Pope Francis, we want to listen again to Saint Paul VI, who decided to go to the Holy Land in early January 1964, the first Successor of the Apostle Peter to make this pilgrimage. In the Apostolic Exhortation Nobis in Animo, with which he established the Collection for the Holy Land in 1974, Paul VI affirmed: The Church of Jerusalem ... occupies a place of predilection in the solicitude of the Holy See and in the concern of the whole Christian world, even as interest for the Holy Places, and in particular for the city of Jerusalem, also emerges in the highest assemblies of the nations and important international organizations ... This attention is demanded even more nowadays by the serious religious, political and social problems existing there …

Even today, the Middle East is witnessing a process that has torn apart the relations between the peoples of the region, creating a situation of such injustice that hoping for peace seems almost rash. In Bari, last July 7, these words of the Holy Father resounded at the beginning of the prayer meeting with the Heads of the Eastern Churches of the Middle East: This region so full of light, especially in recent years, has been covered by dark clouds of war, violence and destruction, instances of occupation and varieties of fundamentalism, forced migration and neglect. All this has taken place amid the complicit silence of many. The Middle East has become a land of people who leave their own lands behind. There is also the danger that the presence of our brothers and sisters in the faith will disappear, disfiguring the very face of the region. For a Middle East without Christians would not be the Middle East.

The Church, as Saint Paul VI recalled in Nobis in Animo, has long done more than simply watch: From the second half of the last century there was an important increase in pastoral, social, charitable and cultural works, for the benefit of the local population without distinction and of the ecclesial communities in the Holy Land ... In order for the two-thousand-year-old Christian origins and continuing presence in Palestine to not only survive but even actively consolidate and work for the other communities with which it must live, it is necessary for Christians from all over the world to show their generosity, bringing to the Church of Jerusalem the charity of their prayers, the warmth of their understanding and the tangible sign of their solidarity.

We notice, with hope, a certain recent resumption of pilgrimages, palpably sensing the joy of the faith in so many faithful who come to the Holy Land in ever-greater numbers from China, India, Indonesia, the Philippines and Sri Lanka: how can we fail to think of the fulfillment of the evangelical prophecy “they will come from the East and from the West, from the North and from the South and will sit at table in the Kingdom of God?” This apostolic vitality is a great sign for the local communities, and calls upon those of the West who are sometimes tempted to discouragement and resignation to live and witness to their faith in daily life.

To you, to the priests, the religious and the faithful, who strive in fidelity to prayer, sacrifice, almsgiving, and the other well-known works of charity requested by the Church for the success of the Collection, I have the joy of transmitting the deep gratitude of the Holy Father, Pope Francis. Invoking abundant divine blessings on this Diocese, I convey my most fraternal greeting in the Lord Jesus.