At 5:00pm local time (noon EDT), the Holy Father, Pope Francis arrived at the International Airport in Rabat-Salé where a departure ceremony was conducted to mark his departure from Morocco.

Upon his arrival, the Pope was welcomed by a representative of King Mohammed VI who met him inside the Royal Salon where they spoke together briefly.

The Secretary of State, His Eminence, Cardinal Pietro Parolin; the Prefect of the Congregation for the Evangelization of Peoples, His Eminence, Cardinal Fernando Filoni; the Substitute of the Secretariat of State, His Excellency, Edgar Peña Parra; the Secretary of the Pontifical Council for Inter-religious Dialogue, His Excellency, Miguel Ángel Ayuso Giuxot, MCCJ and members of the Local coordinating committee greeted the Pope and the King's Delegate.  Then, Pope Francis climbed aboard the Royal Air Maroc B737-800 for the return flight to Italy. 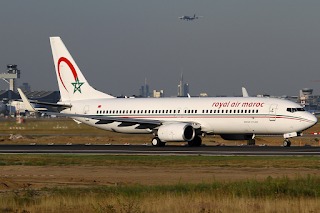 Immediately following his departure from Rabat, the Holy Father, Pope Francis sent the following telegram to His Majesty, King Mohammed VI of Morocco.

As I depart from Morocco to return to Rome, I renew my deep appreciation to Your Majesty and the Royal Family, the government and the beloved people of Morocco for your warm welcome and generous hospitality.  Invoking abundant divine blessings upon all of you, I offer the assurance of my prayers for peace and prosperity in the nation.

During the flight from Rabat to Rome, while passing over Algeria and re-entering into Italy, the Pope sent the following telegrams to the respective Heads of State.

While flying over Algeria

His Excellency, Abdelaziz Bouteflika
President of the Republic of Algeria
Algiers

As my return flight from Morocco takes me over Algeria, I send cordial greetings to Your Excellency and your fellow citizens.  I pray tat the Almighty may grant you all peace and strength, and I invoke divine blessings upon the nation.

Returning from my Pastoral Voyage in Morocco where I was able to meet various facets of the Moroccan people and to express my affectionate esteem for the Christian community, while encouraging all of them to continue their common commitment toward peace and the good will of that entire society, I extend to You, Mister President and to the dear Italian nation, my best wishes, together with a special prayer to God that He may grant to all people the courage and the tenacity to look trustingly into the future.