Greetings to the people of Morocco

Upon his arrival at the Rabat-Salé International Airport, the Holy Father, Pope Francis was welcomed by the King of Morocco, Mohammed VI.  Two children dressed in traditional costumes presented the Pope with a floral bouquet. 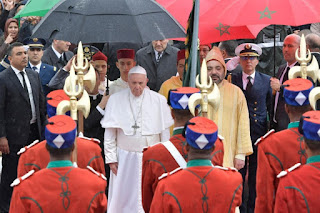 After the presentation of musical tributes, the Holy Father, accompanied by the King, greeted the Archbishop of Rabat, His Excellency, Cristóbal López Romero, SDB before making their way to the Royal Salon where His Holiness was offered dates and milk as a sign of hospitality and welcome.  Then, the Holy Father travelled by car to the Hassan Tour Esplanade for the Official welcoming ceremony. 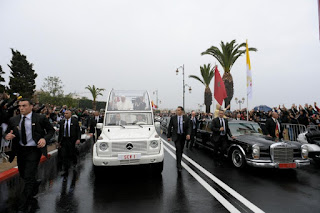 Upon his arrival at the Hassan Tour Esplanade, at 2:40pm, the Holy Father, accompanied by His Majesty, Mohammed VI, went to the main entrance of the esplanade for the welcoming ceremony.

Following the playing of national anthems, the presentation of military honours and the introductions of the respective delegations, the Holy Father and the King arrived together at the podium for a meeting with the people of Morocco, as well as Authorities, leaders in Civil society and members of the Diplomatic Corps. 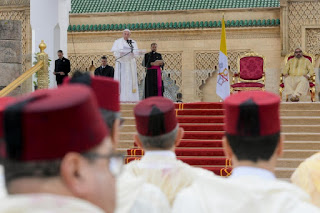 Greetings of His Holiness, Pope Francis
addressed to the people of Morocco

Your Majesty,
Your Royal Highnesses,
Distinguished Authorities of the Kingdom of Morocco,
Members of the Diplomatic Corps,
Dear Friends,

I am pleased to set foot in this country so filled with natural beauty, while at the same time preserving the traces of ancient civilizations and bearing witness to a long and fascinating history. Before all else, I would like to express my deep gratitude to His Majesty, King Mohammed VI for his kind invitation, for the warm welcome which he has given me in the name of the entire Moroccan people, and, in particular, for his gracious introduction.

This visit is for me an occasion of joy and gratitude, for it allows me to see at first hand the richness of your land, your people and your traditions. I am also grateful that my visit offers a significant opportunity for advancing inter-religious dialogue and mutual understanding among the followers of our two religions, as we commemorate – at a distance of eight centuries – the historic meeting between Saint Francis of Assisi and Sultan al-Malik al-Kamil. That prophetic event shows that the courage to encounter one another and extend a hand of friendship is a pathway of peace and harmony for humanity, whereas extremism and hatred cause division and destruction. It is my hope that our mutual esteem, respect and cooperation will help strengthen the bonds of sincere friendship, and enable our communities to prepare a better future for coming generations.

In this land, a natural bridge between Africa and Europe, I would like to affirm once more our need for cooperation in giving new impetus to the building of a world of greater solidarity, marked by honest, courageous and indispensable efforts to promote a dialogue respectful of the richness and distinctiveness of each people and every individual. All of us are called to rise to this challenge, especially at the present time, when our differences and our lack of reciprocal knowledge risk being exploited as a cause for conflict and division.

If we wish, then, to share in building a society that is open, fraternal and respectful of differences, it is vital to foster the culture of dialogue and adhere to it unfailingly, to adopt mutual cooperation as our code of conduct and reciprocal understanding as our method and standard (cf Document on Human Fraternity, Abu Dhabi, 4 February 2019). We are called to pursue this path tirelessly, in the effort to help each other overcome tensions and misunderstandings, clichés and stereotypes that generate fear and opposition. In this way, we will encourage the growth of a fruitful and respectful spirit of cooperation. It is likewise essential that fanaticism and extremism be countered by solidarity on the part of all believers, grounded in the lofty shared values that inspire our actions. For this reason, I am happy that I will shortly visit the Mohammed VI Institute for the Training of Imams, Morchidines and Morchidates. Established by Your Majesty, the Institute seeks to provide effective and sound training to combat all forms of extremism, which so often lead to violence and terrorism, and which, in any event, constitute an offense against religion and against God himself. We know how important it is to provide a suitable preparation for future religious leaders, if we wish to awaken a genuinely religious spirit in the heart of future generations.

Authentic dialogue, then, makes us appreciate more fully the importance of religion for building bridges between people and successfully meeting the challenges that I mentioned above. While respecting our differences, faith in God leads us to acknowledge the eminent dignity of each human being, as well as his or her inalienable rights. We believe that God created human beings equal in rights, duties and dignity, and he calls them to live as brothers and sisters and to spread the values of goodness, love and peace. That is why freedom of conscience and religious freedom – which is not limited to freedom of worship alone, but allows all to live in accordance with their religious convictions – are inseparably linked to human dignity. In this regard, there is a constant need to progress beyond mere tolerance to respect and esteem for others. This entails encountering and accepting others in their distinctive religious beliefs and enriching one another through our diversity, in a relationship marked by good will and by the pursuit of ways we can work together. Understood in this way, creating bridges between people – from the point of view of inter-religious dialogue – calls for a spirit of mutual regard, friendship and indeed fraternity.

The International Conference on the rights of religious minorities in Muslim countries, held in Marrakech in January 2016, addressed this issue, and I am pleased to note that it condemned, in effect, any exploitation of religion as a means of discriminating against or attacking others. It also stressed the need to move beyond the concept of religious minority in favour of that of citizenship and the recognition of the value of the person, which must have a central place in every legal system.

I also see as a prophetic sign the creation in 2012 of the Al Mowafaqa Ecumenical Institute in Rabat. The Institute, an initiative of Catholics and other Christian denominations in Morocco, seeks to help promote ecumenism, as well as dialogue with culture and with Islam. This praiseworthy undertaking manifests the concern and the desire of the Christians living in this country to build bridges as a means of expressing and serving human fraternity.

All these are ways to halt the misuse of religion to incite hatred, violence, extremism and blind fanaticism, and the invocation of the name of God to justify acts of murder, exile, terrorism and oppression (Document on Human Fraternity, Abu Dhabi, 4 February 2019).

The genuine dialogue we want to encourage also leads to a consideration of the world in which we live, our common home. The International Conference on Climate Change, COP 22, also held here in Morocco, once more demonstrated that many nations are conscious of the need to protect this planet where God has placed us to live and to contribute to a true ecological conversion for the sake of integral human development. I express my appreciation for the progress being made in this area and I am gratified by the growth of authentic solidarity between nations and peoples in the effort to find just and lasting solutions to the scourges that threaten our common home and the very survival of the human family. Only together, in patient, judicious, candid and sincere dialogue, can we hope to devise adequate solutions for reversing the trend of global warming and to achieve the goal of eliminating poverty (cf Laudato Si’, 175).

Similarly, today’s grave migration crisis represents an urgent summons for concrete actions aimed at eliminating the causes that force many people to leave country and family behind, often only to find themselves marginalized and rejected. Last December, once more here in Morocco, the Inter-governmental Conference on the Global Compact for safe, orderly and regular migration adopted a document intended to serve as a point of reference for the entire international community. At the same time, much still remains to be done, especially in passing from the commitments undertaken there, at least in principle, to concrete actions, and, more particularly, to a change of attitude towards migrants, one that sees them as persons, not numbers, and acknowledges their rights and dignity in daily life and in political decisions. You are aware of my great concern for the frequently grim fate of such people, who for the most part would not have left their countries were they not forced to do so. I trust that Morocco, which hosted that Conference with great openness and exceptional hospitality, will continue to be an example of humanity for migrants and refugees within the international community, so that here, as elsewhere, they can find generous welcome and protection, a better life and a dignified integration into society. When conditions permit, they can then decide to return home in conditions of safety and respect for their dignity and rights. The issue of migration will never be resolved by raising barriers, fomenting fear of others or denying assistance to those who legitimately aspire to a better life for themselves and their families. We know too that the consolidation of true peace comes through the pursuit of social justice, which is indispensable for correcting the economic imbalances and political unrest that have always had a major role in generating conflicts and threatening the whole of humanity.

Your Majesty, distinguished Authorities, dear friends! Christians are deeply appreciative of the place accorded them in Moroccan society. They wish to do their part in building a fraternal and prosperous nation, out of concern for the common good of its people. In this regard, I think of the significant work of the Catholic Church in Morocco in providing social services and in the field of education, thanks to its schools, which are open to students of every confession, religion and background. In thanking God for all that has been accomplished, allow me to encourage Catholics and all Christians to be servants, promoters and defenders of human fraternity here in Morocco.

Your Majesty, distinguished Authorities, dear friends! I thank you and all the Moroccan people once more for your warm welcome and your kind attention. Shukran bi-saf! May the Almighty, Gracious and Merciful, protect you and bless Morocco! Thank you.
Original text in Italian
Texte en français
Texto en español
Texto em português