Lithuania at the Vatican 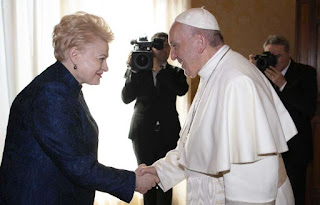 Today, the Holy Father, Pope Francis received in audience Her Excellency, Ms. Dalia Grybauskaitė, President of the Republic of Lithuania, who subsequently met with His Eminence, the Cardinal Secretary of State, Pietro Parolin, accompanied by His Excellency, Paul Richard Gallagher, Secretary for Relations with States.

During the cordial discussions, appreciation was expressed for the good bilateral relations and the positive contribution of the Catholic Church to Lithuanian society, recalling the Holy Father’s recent visit to the country on the occasion of the centenary of independence in 2018. Several themes relating to the social and political situation of the country were then considered.

Finally, attention turned to some themes of an international nature, such as peace and security and the need for greater solidarity to face the various challenges in Europe and in the region.
at 08:46