After lunch at the Apostolic Nunciature in Rabat, the Holy Father, Pope Francis travelled by car to the Prince Moulay Abdellah Sports Complex for the celebration of the Mass.

At 2:48pm local time (9:48am EDT), the Pope presided over the celebration of the Eucharist in Spanish.  Following the proclamation of the gospel, His Holiness pronounced the homily.

At the conclusion of the Mass, His Excellency, Cristóbal López Romero, SDB, Archbishop of Rabat, offered a greeting and some words of thanks to the Holy Father.  Then, before the final Blessing, the Pope offered a few words of greeting to the faithful and to pilgrims who were present.

Immediately afterwards, Pope Francis left the Prince Moulay Abdellah Sports Complex and travelled by car to te Rabat-Salé International Airport for the departure ceremony and his return flight to Rome. 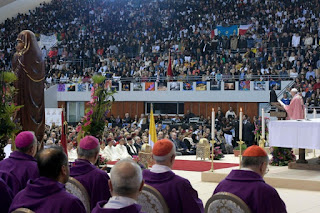 Homily of the Holy Father, Pope Francis
during the Mass celebrated in Rabat, Morocco

While he was still a long way off, his father caught sight of him and was filled with compassion.  He ran to his son, embraced him and kissed him (Lk 15:20).

The Gospel places us in the heart of the parable that manifests the attitude of the father in seeing his son return: shaken to the bones, he does not wait for him to come home but surprises him by running towards him. An expected and desired child. A father moved to see him return.

But that was not the only time the Father started running. His joy would be incomplete without the presence of the other child. For this reason he also went out to meet him, to invite him to participate in the feast (cf Lk 15:28). However, it seems that the elder son did not like welcome parties; he could not bear the joy of his father and does not recognize his brother's return: that son of yours, he says (Lk 15:30). For him his brother continued to be lost, because he had already lost him in his heart.

In his inability to attend the party, he not only could not recognize his brother, but neither could he recognize his father. He preferred being an orphan to fraternity, isolation at the meeting, bitterness at the party. Not only did he struggle to understand and forgive his brother, he could not even accept having a father who could forgive, one who was willing to wait and watch so that no one was left out, in short, a father capable of feeling compassion.

On the threshold of that house the mystery of our humanity seemed to manifest itself: on the one hand there was the feast for the rediscovered son and, on the other, a certain feeling of betrayal and indignation at the fact that the father was celebrating his return. On the one hand hospitality for the one who had experienced misery and pain, who had even come to smell and desire to eat what the pigs ate; on the other hand, irritation and anger at making space for those who were not worthy or those who deserved such an embrace.

Thus, once again, the tension that exists between our people and in our communities emerges, and even within ourselves. A tension that, beginning with Cain and Abel, lives on in us; a tension that we are called to face. Who has the right to remain among us, to have a place at our table and in our assemblies, in our concerns and occupations, in our squares and cities? It seems that the fratricidal question continues to resound: am I perhaps my brother's keeper? (cf Gen 4:9).

On the threshold of that house appear the divisions and the clashes, the aggressiveness and the conflicts that will always strike the doors of our great desires, of our struggles for fraternity in order that every person can already experience his condition and dignity as a son.

But there too, on the threshold of that house will shine with all clarity, without speculations or excuses that force him away, the desire of the Father: that all his children take part in his joy; that no one lives in non-human conditions like his youngest son, nor in his orphan-ness, isolation and bitterness like his eldest son. His heart wants all men to be saved and to come to the knowledge of the truth (1 Tim 2:4).

Certainly there are many circumstances that can fuel division and conflict; situations that can lead us to clash and divide are undeniable. We can't deny it. We are always threatened by the temptation to believe in hatred and revenge as legitimate ways to seek justice quickly and effectively. But experience tells us that hatred, division and revenge only kill the soul of our people, poison our children's hope, destroy and take away everything we love.

Therefore Jesus invites us to look toward and to contemplate the heart of the Father. Only from here can we rediscover ourselves every day as brothers. Only starting from this broad horizon, able to help us overcome our short-sighted logics of division, will we be able to reach a gaze that does not pretend to obscure or disprove our differences by seeking perhaps a forced unity or silent exclusion. Only if we are able every day to raise our eyes to heaven and say Our Father will we be able to enter into a dynamic that allows us to look and dare not live as enemies, but as brothers.

All that is mine is yours (Lk 15,31), says the father to the eldest son. And this does not refer only to material goods but the ability to participate in his own love and compassion. This is the greatest legacy and wealth of the Christian. Because, instead of measuring or classifying ourselves according to a moral, social, ethnic or religious condition, we can recognize that there is another condition that no one can cancel or annihilate since it is a pure gift: the condition of children who are loved, expected and celebrated by our Father.

All that is mine is yours, even my capacity for compassion, the Father tells us. We do not fall into the temptation to reduce our belonging as children to a question of laws and prohibitions, duties and obligations. Our belonging and our mission will not come from voluntarism, legalism, relativism or how well we are integrated, but from believing people who will implore every day with humility and constancy: may your kingdom come.

The gospel parable presents an open ending. We see the father pleading with the eldest son to enter and participate in the feast of mercy. The Evangelist says nothing about the decision he made. Will he join the party? We can think that this open ending has the purpose that every community, each of us, can write it with our lives, with our looks and our attitudes towards others. The Christian knows that there are many dwellings in the Father's house, and only those who do not want to participate in his joy remain outside.

Dear brothers, dear sisters, I want to thank you for the way you bear witness to the gospel of mercy in these lands. Thank you for your efforts to make your communities an oasis of mercy. I encourage you to continue to strengthen the culture of mercy, a culture in which no one looks at the other with indifference or gazes when he sees his suffering (cf Apostolic Letter Misericordia et misera, 20). Continue to be close to the little ones and the poor, to those who are rejected, abandoned and ignored, continue to be a sign of the Father's embrace and His heart.

And may the Most Merciful and the Clement One - as our Muslim brothers and sisters often invoke Him - strengthen you and make the works of his love bear fruit.
Original text in Spanish
Texte en français
Texto en português
Testo in italiano


Greetings of the Holy Father, Pope Francis
at the conclusion of the Mass

At the conclusion of this Eucharist, I wish once again to bless the Lord who permitted me to make this trip in order to stand before you and with you as a servant of Hope.

I thank His Majesty, King Mohammed VI for his invitation; I thank him for wanting to be close to us by sending his representatives; I thank all the Authorities and all those who have worked together for the success of this trip.

Thank you to my brothers in the Episcopate, the Archbishops of Rabat and Tangier, and also the other Bishops, the priests, the Religious men and women and all the lay faithful who are here in Morocco at the service of life and the mission of the Church.  Thank you to all of you, dear brothers and sisters, for all that you have done to prepare for this voyage and for all that we have been able to share thanks to our faith, to hope and to charity, and for all that we have shared thanks to the fraternity that exists between Christians and Muslims.  Thank you so much!

With these sentiments of gratitude, I wish to encourage you once again to persevere on the path of dialogue between Christians and Muslims and to work together so that your fraternity may be visible and universal, for it finds its source in God.  May you be the servants of hope that the world so dearly needs.