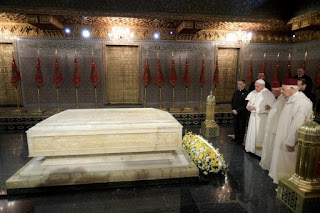 Before leaving the Mausoleum, the Pope signed the Golden Book.  Then, the Mausoleum Conservatory presented the Pope with a trophy and a book on the history of that Monument. 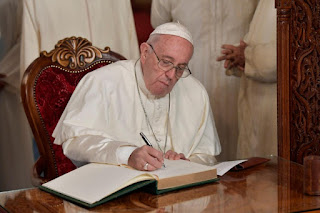 At the conclusion of his visit, the Pope travelled by car to the Royal Palace where he paid a courtesy visit to King Mohammed VI.

Upon his arrival at the Royal Palace - at 4:25pm local time (11:25am EDT), before climbing to the Royal Cabinet, His Majesty, Mohammed VI and Pope Francis received the honours that were presented by the Royal Guard.

Following the introduction of the members of the Royal Family, and the exchange of gifts, a private meeting took place between the Pope and the King. 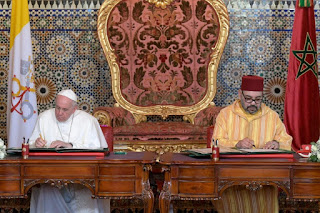 At the conclusion of the private meeting, inside the Throne Room, His Majesty and Pope Francis signed a common Call concerning Jerusalem / Al Qods : Holy City and a Place of Encounter.

Then, King Mohammed VI accompanied the Pope to the entrance of the Palace where they once again received military honours presented by the Royal Guards.  After bidding farewell to the King, the Holy Father travelled by car to the Mohammed VI Institute for Imams and Preachers. 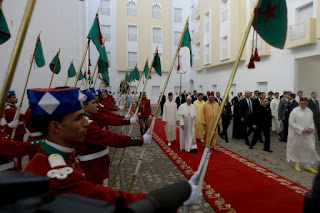 Upon his arrival at the Mohammed VI Institute for Imams and Preachers - at 5:10pm local time (12:10pm EDT), Pope Francis was welcomed by His Majesty, Mohammed VI, as well as the Minister for Religious Affairs, the Director of the Institute and the President of the Council of Ulema.  Then, inside, having received the honours presented by the Military Guard, they went to the auditorium. 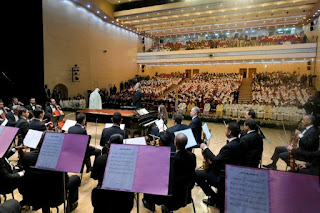 Following the viewing of a video and the presentation of greetings by the Minister of Religious Affiars, an African student presented a testimonial and some European students also presented their witnesses.  A few musical performances from Hebrew Christian and Muslim traditions then followed before King Mohammed VI escorted Pope Francis to his automobile.

The Holy Father then travelled by car to the Rabat Diocesan offices of Caritas where he met with migrants.
at 14:03