This morning's General Audience began at 9:00am local time (3:00am EST) in Saint Peter's Square where the Holy Father, Pope Francis met with groups of pilgrims and the faithful from Italy and from every corner of the world.

In his speech, the Pope continued the cycle of catechesis on the Acts of the Apostles, adding his meditation on the theme: Watch over yourselves and over the whole flock (Acts 20:28). The ministry of Paul in Ephesus and the dismissal of the elders (Biblical passage: Acts of the Apostles 20:32-35).

After summarizing his catechesis in various languages, the Holy Father offered particular greetings to each group of the faithful in attendance. 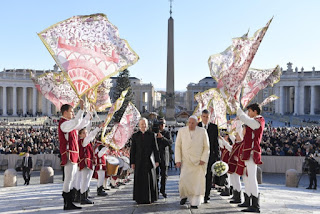 The journey of the Gospel in the world continues unabated in the Book of the Acts of the Apostles, and passes through the city of Ephesus showing all its salvific significance. Thanks to Paul, about twelve men receive baptism in the name of Jesus and experience the outpouring of the Holy Spirit who regenerates them (cf Acts 19:1-7). The miraculous happenings that take place through the Apostle are different: the sick recover and the obsessed are freed (cf Acts 19: 11-12). This happens because the disciple resembles his Master (cf Lk 6:40) and makes him present by communicating to his brothers the same new life that he received from Him.

The power of God that breaks into Ephesus unmasks those who want to use the name of Jesus to perform exorcisms but without having the spiritual authority to do so (cf Acts 19:13-17), and reveals the weakness of the magical arts, which are abandoned by a large number of people who choose Christ and turn away from the magical arts (cf Acts 19:18-19). A real reversal for a city, like Ephesus, which was a centre famous for the practice of magic! Thus, Luke emphasizes the incompatibility between faith in Christ and magic. If you choose Christ you cannot have recourse to the magician: faith is trusting abandonment into the hands of a reliable God who makes himself known not through hidden practices but by revelation and with gratuitous love. Perhaps some of you will tell me: Ah, yes, this magic is an ancient thing: today, with Christian civilization this does not happen. But be careful! I ask you: how many of you go to get tarot cards read, how many of you go to get your hands read from fortune tellers or have your cards read? Even today, in the big cities, practicing Christians do these things. And to the question: But why, if you believe in Jesus Christ, do you go to the magician, to the fortune teller, to all these people?, They answer: I believe in Jesus Christ but out of luck I also go to them. Please: magic is not Christian! These things that are done to guess the future or to guess many things or to change life situations are not Christian. The grace of Christ brings you everything: pray and entrust yourself to the Lord.

The spread of the Gospel in Ephesus damages the trade of silversmiths - another problem - who manufactured the statues of the goddess Artemis, making a religious practice a real bargain. I ask you to think about this. Seeing that activity that yielded a lot of money diminish, the silversmiths organized a riot against Paul, and Christians were accused of having undermined the category of artisans, the sanctuary of Artemis and the cult of this goddess (cf Acts 19:23-28 ).

Paul then left Ephesus for Jerusalem and reached Miletus (cf Acts 20:1-16). Here he sent for the elders of the Church of Ephesus - the presbyters: they would be the priests - to make a pastoral handover (cf Acts 20:17-35). We are at the end of the apostolic ministry of Paul and Luke presents his farewell address, a sort of spiritual testament that the Apostle addresses to those who, after his departure, will have to lead the community of Ephesus. And this is one of the most beautiful pages of the Book of the Acts of the Apostles: I advise you to take the New Testament, the Bible, chapter XX today and to read this farewell to Paul from the presbyters of Ephesus, and he does so in Miletus. It is a way of understanding how to dismiss the Apostle and also how presbyters today must take leave and also how all Christians must take leave. It's a beautiful page.

In the exhortation part, Paul encourages the leaders of the community, who know that they are seeing him for the last time. And what does he say to them? Watch over yourself and the whole flock. This is the work of the shepherd: waking, watching over himself and the flock. The pastor must watch over, the pastor must watch, do the vigil, presbyters must watch, Bishops, even the Pope must watch. Keep vigil to guard the flock, and also to watch over oneself, examine the conscience and see how this duty to watch is accomplished. Watch over yourselves and over the whole flock, in the midst of which the Holy Spirit has constituted you as guardians to be shepherds of the Church of God, which was acquired with the blood of his own Son (Acts 20:28): so says Saint Paul. The maximum closeness to the flock is demanded of the bishops, redeemed by the precious blood of Christ, and the readiness to defend it from the wolves (Acts 20:29). The Bishops must be very close to the people in order to guard them, to defend them; not detached from the people. Having entrusted this task to the leaders of Ephesus, Paul puts them in the hands of God and entrusts them to the word of his grace (Acts 20:32), the leaven of all growth and the path of holiness in the Church, inviting them to work with their own hands, like him, not to be a burden to others, to help the weak and to experience that one is more blessed in giving than in receiving (Acts 20:35).

Dear brothers and sisters, let us ask the Lord to renew in us our love for the Church and for the deposit of faith that it preserves, and to make us all co-responsible in our custody of the flock, supporting our pastors in prayer so that they may manifest the firmness and tenderness of the Divine Shepherd.

The Holy Father's catechesis was then summarized and His Holiness offered greetings to all those who were in attendance.  To English-speaking visitors, he said:

I greet the English-speaking pilgrims and visitors taking part in today’s Audience, especially the groups from Malta, Indonesia, Malaysia, Singapore, Canada and the United States of America. I pray that each of you, and your families, may experience a blessed Advent, in preparation for the coming of the newborn Saviour at Christmas. May God bless you!
at 23:02