Greetings to the Pontifical Academies

Yesterday afternoon, at the Chancery Palace in Rome, the XXIV public session of the Pontifical Academies was held.  This session was organized this year by the Pontifical International Marian Academy, celebrating the 60th anniversary of the foundation of the Marian Academy.  The theme for this gathering is: Mary, the way of peace between cultures.

The working sessions were introduced by Cardinal Gianfranco Ravasi, President of the Pontifical Council of Culture and the Coordinating Council for the Pontifical Academies.

During yesterday's session, before awarding the Pontifical Academies' prize for this year, the Cardinal Secretary of State, Pietro Parolin read aloud the following Message which was sent by the Holy Father. 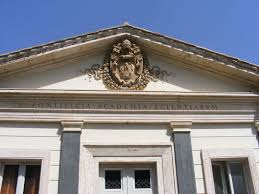 Message of the Holy Father, Pope Francis
addressed to the Pontifical Academies

I address you on the occasion of the 24th Solemn Public Session of the Pontifical Academies, a circumstance that characterizes, thanks to the reform desired by Saint John Paul II in 1995, the journey of the seven Academies gathered in the Coordinating Council, which is chaired by you, and which finds in the awarding of the Prize a significant moment of their commitment to the service of theology, culture and the pastoral life of the Church. I offer my cordial greetings to the Cardinals, the Bishops, the Ambassadors, the members of the Academies and all the friends who are present.

The Academy is a place where knowledge becomes service, because without a knowledge that comes from collaboration and results in cooperation there is no genuinely and integrally human development. The Academy is, in its own field, an experience and a model of synodality. It is also a force for evangelization, which belongs to the presence of the Church and of her mission (cf Apostolic Exhortation Evangelii Gaudium, 83). And the award that I have the pleasure of presenting today is intended as an invitation to celebrate the ever fruitful bond between the Gospel and culture.

This XXIV gathering was organized by the Pontifical International Marian Academy, which this year celebrates the 60th anniversary of its establishment, by Saint John XXIII, on 8 December 1959. I am delighted with Reverend Father Stefano Cecchin and the respective Academicians, for their commitment in promoting Mariological science and fostering authentic Marian piety. Thus, this Academy becomes a similar place to the House of Mary, where Jesus grew in age, wisdom and grace (Lk 2:46), and where the Virgin, as a welcoming mother and caring bride, teaches us to be a Living cenacle.

The theme chosen for this Public Session, Mary, the way of peace between cultures, ideally summarizes the journey of these sixty years. The dramatic experience of the two world wars led Pius XII to show, in the sign of the Assumption, a beacon of peace to restless and frightened humanity. The Second Vatican Council, then, indicated in the Mother of the Lord the model of a Church that is a teacher in humanity, to serve the deepest aspirations of the human heart.

In Saint Paul VI the bond between the Blessed Virgin and the believing people resonates loudly, clearly, consciously and excitingly. He wrote in the Exhortation Marialis cultus: To the contemporary man, not infrequently tormented between anguish and hope, prostrated by the sense of his limits and assailed by aspirations without boundaries, troubled in the soul and divided in the heart, with the mind suspended by the enigma of death, oppressed by loneliness while tending towards communion, prey to nausea and boredom, the Blessed Virgin Mary, contemplated in her evangelical history and in the reality she already possesses in the City of God, offers a serene vision and a word reassuring: the victory of hope over anguish, of communion over solitude, of peace over disturbance, of joy and beauty over boredom and nausea, of eternal perspectives over temporal ones, of life over death (MC, 57).

Saint John Paul II made sure that the Mother of the Redeemer became a motive and inspiration for a renewed encounter and a renewed fraternity as ways of access for the Church and the world in the new millennium. For this reason, he wanted Mariology to play its due role in university theological education and in the dialogue between the various realms of knowledge. He also hoped that Mariology would enter into the crucial questions of our time.

Finally, Benedict XVI urged scholars to further investigate the relationship between Mariology and theology of the Word. From this - he said - it will be of great benefit both for the spiritual life and for theological and biblical studies. In fact, what the intelligence of faith has thematized in relation to Mary is placed in the most intimate centre of Christian truth (Post-synodal Apostolic Exhortation, Verbum Domini, 27).

The Pontifical International Marian Academy accompanied the universal Magisterium of the Church with the research and coordination of Mariological studies; with the International Mariological-Marian Congresses, of which the 25th will be celebrated next year; collaborating with various ecclesiastical and lay study centres; and, finally, through cooperation with various academic institutions. These commitments are a clear testimony of how Mariology is a necessary presence of dialogue between cultures, capable of nurturing fraternity and peace.

Wishing, therefore, to promote and encourage theological research, and particularly research aimed at studying Mariological themes in greater depth, I am pleased to award the Prize of the Pontifical Academies, ex aequo, to Doctor Carme López Calderón, for the work Engravings from Augsburg for an emblematic portuguese cycle: The church tiles from the convent of Jesús de Setúbal, and to the Reverend Doctor Ionuț-Cătălin Blidar, for the study entitled Immaculate humanity of Mary - icon of the logos of God, fulfillment of the chosen lineage and fruit of the tree of the cross. An ecumenical approach to the Greek-Latin immaculatist Mariology (II-XIV century). Furthermore, I am pleased to award the Medal of the Pontificate to the Croatian Mariological Institute.

I entrust each one of you to the Virgin Mary, Mother of Tenderness; may she accompany your personal journey and that of your academies.  With all my heart, I impart to all of you and to your families and communities a special Apostolic blessing.