Greetings for visitors from Milan, Padua and Treviso

This morning, inside the Vatican Apostolic Palace, the Holy Father, Pope Francis received in audience the Diocesan staff from Milan and the staff from the Dioceses of Padua and Treviso.

Having presented the text of his prepared speech to those who were in attendance, the Pope shared some unscripted comments. 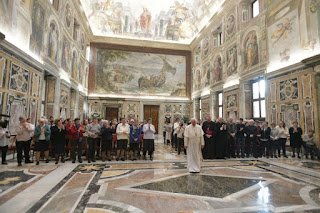 Greetings of the Holy Father, Pope Francis
addressed to staff from the Dioceses of
Milan, Padua and Treviso

I welcome you and I thank you for being here, and I am also grateful to your Bishops and to the priests who have accompanied you.  In particular, I thank the Archbishop of Milan, His Excellency, Mario Delpini, for the words with which he introduced our meeting.

It is important to emphasize the central aspect of your identity, which is significant as a form of the presence of women in the Church. And this reflection must start with your history, which began in Milan during the episcopate of Saint Giovanni Battista Montini.

Your history says that you were not born at the table, much less for an ideological need, but you were born from life, out of the experience of associated apostolates, especially in Catholic Action. The associated apostolate of which the conciliar decree on the action of the lay faithful speaks (Apostolicam Actuositatem 18-20). You are born out of the collaboration with the priests in the parish and diocesan pastoral care. This is very important.

When Jesus welcomed some women among his disciples, also in close collaboration with the Twelve, he did not do so for the sake of ante litteram feminism, but because the Father made it possible for him to meet those sisters, who were in need of being healed, just like the men (cf Lk 8:2). Among these, Mary Magdalene had a particular charisma of faith and love for the Lord, and he showed himself to her first on Easter morning and asked her to go and share the proclamation with the brothers: she was the apostle to the apostles. But other women also have a decisive presence in the Resurrection stories. This is why your name - women of the resurrection - attributed to you by Archbishop Montini, is very fair, as well as beautiful.

But let us return to the Council. Where in particular she speaks of Catholic Action, the Council says: "These lay people, whether they spontaneously offer themselves, or are invited to action and direct cooperation with the hierarchical apostolate, act under the superior direction of the hierarchy itself, which can sanction this cooperation also by means of an explicit 'mandate' (Apostolicam Actuositatem, 20). Here we see an originating and qualifying point: the experience of collaborating directly with the pastors in service to the people, to the people of God, in the parishes, in the oratories, with the poor, in prisons ... In those who live this work, which is sometimes hard and tiring (cf Rom 16:6), the Holy Spirit sows special gifts of dedication, that can also become consecration in the Church.

And here it is important that the Bishop and the priests appointed by him make good discernment. This is what happened to you, in the different diocesan realities: Milan, Treviso, Padua and Vicenza. We note some constants between the different experiences, and the essential one is that the Bishop is attentive to a gift that is found in the community, a gift that corresponds to a pastoral need - but not only to a function, it is not a matter of functionalism - , and then he makes a discernment. Thus the charism is examined, accepted and recognized, and receives its form in that diocesan community. Therefore, the element of close collaboration with the Bishop emerges as qualifying.

Of course there are other forms of cooperation involving women in the Church, both lay faithful and religious as well as consecrated lay people, but yours has this specificity.

I appreciated - and I am grateful to you - that in presenting your charism you referred to a passage from Evangelii gaudium, which reads: Mission is a passion for Jesus but, at the same time, it is a passion for his people ... Thus we rediscover that he wants to use us to get ever closer to his beloved people. He takes us among the people and sends us to the people, so that our identity is not understood without this belonging (EG, 268). For you, this people has the concrete face of your diocese. In fact the names of all the Institutes represented here qualify you as diocesan. It is a delimitation, of course, but one that has the sense of being rooted and not closed, of fidelity and not of particularism, of dedication and not exclusion.

This aspect of fidelity not to a generic people, but to this people, with its history, its riches and its poverty is an essential trait of the mission of Jesus Christ, sent by the Father to the lost sheep of the house of Israel (Mt 15.24). And his giving his life for everyone necessarily includes giving it to those concrete people, to that community, to those friends, and to those enemies. This fidelity costs; it has the hardness of the cross, but it is fruitful, generative, according to God's designs.

Dear sisters, I thank you for your witness.  Keep going, with the joy of the resurrection and with passion for your people.  Bless you.
Testo originale nella lingua italiana
at 08:48