Religion and Medical Ethics, Day 1 at the Symposium

The opening session of the Symposium entitled Religion and Medical Ethics: Palliative Care and the Mental Health of the Elderly, which is taking place that the Augustinianum in Rome began with the speeches delivered by Archbishop Vincenzo Paglia, President of the Pontifical Academy for Life; and Doctor Sultana Afdhal, Chief Executive Officer of WISH - Qatar.

Next, a Message from the Cardinal Secretary of State, His Eminence, Pietro Parolin was read aloud: 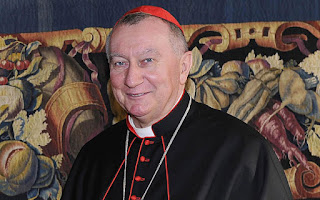 Message of His Eminence, Cardinal Pietro Parolin
Secretary of State of His Holiness

To His Excellency, Vincenzo Paglia
and the participants taking part in the International Symposium
on Religion and Medical Ethics:

I offer cordial greetings to you and to the scholars and experts from different religious traditions assembled in Rome in these days for the International Symposium on Religion and Medical Ethics, Palliative Care and the Mental Health of the Elderly, as you explore this complex issue of pressing concern.

The theme of this event, co-sponsored by the Pontifical Academy for Life and the World Innovation Summit for Health, seeks to place the elderly - especially those suffering from mental health issues and those in the final stages of life - at the very centre of our consideration. The frailty and vulnerability of people in need of palliative and other types of care should never permit a merely utilitarian attitude to take hold. Tragically, they are all too often overlooked, rejected or even discarded with an attitude of abandonment, which is actually real and hidden euthanasia (Address of His Holiness, Pope Francis to the Elderly, Saint Peter's Square, 28 September 2014). Hence the urgent need that they should find a solid support for their God-given dignity and worth in the ethical and spiritual vision shared by the various religions.

May the ecumenical and inter-religious cooperation, evident in this Symposium, continue to be fruitful in defending the care to which the elderly are entitled and in building a culture of encounter and acceptance in which they are esteemed and loved.

In expressing these sentiments, I have the honour to convey the Holy Father's prayerful good wishes for the Symposium and its important deliberations.

Yours sincerely in Christ,
Pietro Cardinal Parolin
Secretary of State

Day 1. The role of different Religions

•EV, §65 ‘Euthanasia must be distinguished from the decision to forego so-called ‘aggressive medical treatment’, in other words, medical procedures which no longer correspond to the real situation of the patient, either because they are by now disproportionate to any expected results or because they impose an excessive burden on the patient and his family. … Certainly there is a moral obligation to care for oneself and to allow oneself to be cared for, but this duty must take account of concrete circumstances…’

5.31 All reasonable steps which are in the person’s best interests should be taken to prolong their life. There will be a limited number of cases where treatment is futile, overly burdensome to the patient or where there is no prospect of recovery. In circumstances such as these, it may be that an assessment of best interests leads to the conclusion that it would be in the best interests of the patient to withdraw or withhold life-sustaining treatment, even if this may result in the person’s death.

Notwithstanding its promise, SDM [supported decision-making] has its limits. Undeniably, there are situations where despite the decision-support offered, a patient remains unable to make an informed treatment decision. The comatose patient provides a pertinent example, but similar considerations hold for a range of persons with other conditions, such as late stage dementia or psychosis. Accordingly, SDM does not make competence assessment and substitute decision-making superfluous. That said, reasonable accommodation requires health professionals to exhaust the available resources of SDM before they take recourse to substitute decision-making. Scholten M, Gather J. (2018) Adverse consequences of article 12 of the UN Convention on the Rights of Persons with Disabilities for persons with mental disabilities and an alternative way forward.  Journal of Medical Ethics, 44, 226–233.

The questions are opened, but in any case we need to be persons in communion with the others.
at 16:22