Greetings for the Congregation for the Causes of Saints

This morning, in the Vatican Apostolic Palace, the Holy Father, Pope Francis received in audience the members of the Congregation for the Causes of Saints on the occasion of the 50th anniversary of the establishment of that institution. 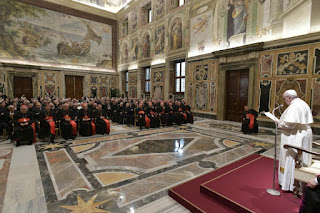 Greetings of the Holy Father, Pope Francis
addressed to the members of the
Congregation for the Causes of Saints

I am pleased to meet with the great family of the Congregation for the Causes of Saints, which carries out its work at the service of the universal Church in recognition of the holiness of those who have faithfully followed Christ. I affectionately greet Cardinal Angelo Becciu, Prefect of the Dicastery, and thank him for his words. I greet the Cardinals and Bishops who are Members; the Secretary, Monsignor Marcello Bartolucci, the Undersecretary, the Officials, the Consultors and the Postulators.

In this half century of activity, your Congregation has examined a large number of biographical and spiritual profiles of men and women, to present them as models and guides of Christian life. The many beatifications and canonizations that have been celebrated in recent decades mean that the saints are not unreachable human beings, but that they are close to us and can support us in the journey of life. In fact, they are people who have experienced the daily toil of existence with its successes and its failures, finding in the Lord the strength to always get up and continue the journey (Angelus, 1 November 2019). And it is important to measure our evangelical coherence with different types of holiness, since "every saint is a mission; it is a project of the Father to reflect and incarnate an aspect of the Gospel at a specific moment in history (Apostolic Exhortation Gaudete et exsultate, 19).

The testimony of the Blesseds and Saints enlightens us, attracts us and also causes us to question, because they represent the word of God embodied in history and close to us. Holiness permeates and always accompanies the life of the pilgrim Church over time, often in a hidden and almost imperceptible way. Therefore, we must learn to see holiness in God's patience: in parents who help their children to grow with so much love, in men and women who work to bring home food, in the sick, in elderly women who continue to smile ... This is so many times the holiness 'of the people next door', of those who live near us and who are a reflection of the presence of God (GE, 7).

Your Dicastery is called to verify the various modalities of heroic sanctity, the ones that shine most visibly and the most hidden and least striking, but equally extraordinary ones. Holiness is the true light of the Church: as such, it must be placed on the candelabrum so that it can illuminate and guide the path of all the redeemed towards God. This is a daily verification carried out by your Dicastery, which since antiquity has been carried out with scrupulousness and accuracy in investigative research, with seriousness and skill in the study of procedural and documentary sources, with objectivity and rigor in the examination and in every grade of judgment concerning martyrdom, heroic virtues, the offering of life and miracles. These are fundamental criteria, which are required by the gravity of the subject dealt with, by the legislation and by the just expectations of the people of God, which relies on the intercession of the Saints and is inspired by their example of life.

Following this path, the work of the Congregation makes it possible to clear the field of all ambiguity and doubt, achieving full certainty in the proclamation of holiness. I can therefore only exhort each of you to continue on the path traced and traveled for about four centuries by the Congregation of the Sacred Rites, and continued in the last fifty years by the Congregation for the Causes of Saints. I encourage the Superiors, the Cardinals, and the Bishops who are Members of the Dicastery, and all the Officials in this effort.

The Consultors, in the historical, theological and medical fields, are called to carry out their work with full freedom of conscience, carefully studying the cases entrusted to them and formulating the relative judgments with mature reflection, impartially and without taking into account any conditioning, from whatever source it may come. The Regulations and the practice of the Dicastery, as well as the supervision of Superiors, favour a relationship of absolute independence between the drafters of individual vows and those who form or coordinate the particular Congresses. It is a matter of always keeping in mind the specific purposes of the Causes, which are the glory of God and the spiritual good of the Church, and these are closely linked to the search for truth and evangelical perfection.

For their part, the Postulators are increasingly aware that their function requires an attitude of service to the truth and of cooperation with the Holy See. They do not allow themselves to be guided by material visions and economic interests, they do not seek their personal affirmation and above all they flee everything that is in contradiction with the meaning of the ecclesial work they carry out. Let there never be less awareness in the Postulators of the fact that Causes of beatification and canonization are spiritual realities; not only procedural, but also spiritual. Therefore they must be treated with a strong evangelical sensitivity and moral rigor. Indeed, once, with Cardinal Amato, we spoke of the need for a miracle. It takes a miracle because it is God's finger right there. Without a clear intervention from the Lord, we cannot move forward in the causes of canonization.

Dear brothers and sisters, I thank you for the diligent service you render to the whole Church. Through your work, you stand beside the Bishops in particular to support their commitment in spreading the awareness that holiness is the most profound need of every baptized person, the soul of the Church and the priority aspect of her mission. I entrust your daily work to the maternal intercession of Mary, Queen of the Saints, and, as I ask you to pray for me, I cordially impart my Apostolic Blessing.
Testo originale nella lingua italiana
at 13:28