This morning's General Audience began at 9:20am local time (3:20am EST) in the Paul VI Hall where the Holy Father, Pope Francis met with groups of pilgrims and the faithful from Italy and from every corner of the world.

In his speech, the Pope continued the cycle of catechesis on the Acts of the Apostles, adding his meditation on the theme: A little while longer and you will convince me to become a Christian! (Acts 26:28).  Paul, a prisoner before King Agrippa (Biblical passage: Acts of the Apostles 26:22-23). 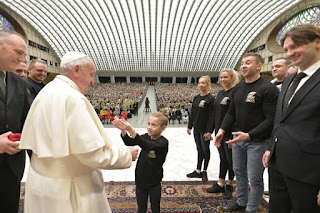 As we read the Acts of the Apostles, the journey of the Gospel in the world continues and the testimony of Saint Paul is increasingly marked by the seal of suffering. But this is something that grows over time in Paul's life. Paul is not only the evangelizer full of ardor, the intrepid missionary among the pagans who gives life to new Christian communities, but he is also the suffering witness of the Risen One (cf Acts 9: 15-16).

The arrival of the Apostle in Jerusalem, which is described in chapter 21 of the Acts, unleashes a fierce hatred towards him, and people reproach him: But, this was a persecutor! Don't trust him! As it was for Jesus, so it was for Paul; for him, Jerusalem was a hostile city. Having gone to the temple, he was recognized, led out to be lynched and saved in extremis by Roman soldiers. Accused of teaching against the Law and the Temple, he was arrested and began his prison wanderings, first before the Sanhedrin, then before the Roman procurator at Caesarea, and finally before King Agrippa. Luke highlighted the similarity between Paul and Jesus: both were hated by their adversaries, publicly accused and recognized as innocent by the imperial authorities; and so Paul was associated with the passion of his Master, and his passion became a living gospel. I have come from the Basilica of Saint Peter this morning, and there I had a first audience this morning with the Ukrainian pilgrims from one of the Ukrainian dioceses. How these people were persecuted; how they suffered for the Gospel! But they did not negotiate faith. They are an example. Today in the world, in Europe, many Christians are persecuted and give their lives for their faith, or they are persecuted with white gloves, that is left aside, marginalized ... Martyrdom is the air of the life of a Christian, of a community Christian. There will always be martyrs among us: this is the signal that we are walking on the road of Jesus. It is a blessing from the Lord, whenever there is among the people of God, someone who gives this testimony of martyrdom.

Saint Paul was called to defend himself against accusations, and in the end, in the presence of King Agrippa II, his apology turned into an effective witness of faith (cf Acts 26,1-23).

Then Paul recounted his own conversion: the Risen Christ made him a Christian and entrusted him with the mission among the nations, that they may turn from darkness to the light, from the power of Satan to God, and obtain the forgiveness of their sins and their inheritance, in the midst of those who were sanctified by faith in Christ (Acts 26:18). Paul obeyed this task and did nothing but show how the prophets and Moses foretold what he then announced: that the Christ should suffer and that, first among the resurrected from the dead, he would announce the light to the people and to the nations (Acts 26:23). Paul's passionate testimony touched the heart of King Agrippa, who lacked only the step of making his decision. And the king said this: Yet a little while and then convince me to become a Christian! (Acts 26:28). Paul was declared innocent, but he could not be released because he had appealed to Caesar. Thus the unstoppable journey of the Word of God continued towards Rome. Paul would end up here in Rome, in chains.

From that moment on, the portrait of Paul was that of the prisoner whose chains are the sign of his fidelity to the Gospel and of the testimony given to the Risen One.

Chains were certainly humiliating proof for the Apostle, who appeared to the eyes of the world to be a criminal (2 Tim 2: 9). But his love for Christ was so strong that even those chains were read with the eyes of faith; faith that for Paul was not a theory, an opinion about God and about the world, but the impact of God's love on his heart ... is love for Jesus Christ (Benedict XVI, Homily on the occasion of the Pauline Year, 28 June 2008).

Dear brothers and sisters, Saint Paul teaches us perseverance in trial and the ability to read everything with the eyes of faith. Today we ask the Lord, through the intercession of the Apostle, to revive our faith and to help us be faithful to the end of our vocation as Christians, as disciples of the Lord and as missionaries.

The Holy Father's catechesis was then summarized in various languages and His Holiness offered particular greetings to each group of the faithful in attendance.  To English-speaking pilgrims, he said:

I greet the English-speaking pilgrims and visitors taking part in today’s Audience, especially the groups from the United States of America. I pray that each of you, and your families, may experience a blessed Advent, in preparation for the coming of the newborn Saviour at Christmas. May God bless you!
Testo originale nella lingua italiana
at 17:00