Greetings to leaders of Solidarnosc

This morning, before the General Audience, the Holy Father, Pope Francis received in audience, inside the Vatican, the members of the Administrative Council of the autonomous independent Polish union known as Solidarnosc, on the occasion of the 40th anniversary of their foundation. 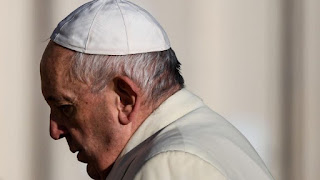 Greetings of the Holy Father, Pope Francis
addressed to members of the Administrative Council
of the Polish Solidarnosc union

I cordially greet all of you and I thank you for this visit on the occasion of the 40th anniversary of the foundation in Poland of the autonomous and independent union called Solidarnosc.  As recent history demonstrates, it has been the protagonist of political and social change in your country and has also had an inspirational role even beyond your borders.

I congratulate you on your service in favour of the common good and for the different professional groups in Poland; and I want to remember that the sincere search that people and groups undertake to find good, truth and justice is always accompanied by the presence of God (cf Apostolic Exhortation Evangelii Gaudium, 71). Forty years ago, Saint John Paul II invoked for his fellow countrymen precisely this presence of God and the breath of the Holy Spirit, exclaiming: Let your Spirit descend! And renew the face of the earth. Of this earth! (Homily, Warsaw, 2 June 1979).

One of the signs of openness to the Spirit of God is the attitude of solidarity with people deprived of their inalienable rights, solidarity that takes place in the fields of work and study, in social, economic, political and international relations (cf Evangelii Gaudium, 205). The word solidarity has worn off a little and is sometimes misunderstood, but it indicates much more than some sporadic act of generosity (EG, 188). It is a sensitivity to the voices of brothers and sisters who have been deprived of the right to dignified working conditions, to the just reward needed for family support, health care or rest.

In dialogue with the State and with society, the Church does not have solutions for all particular questions. However, together with the various social forces, it accompanies the proposals that can best respond to the dignity of the human person and the common good (EG, 241). It must be remembered that the condition for positive changes in social structures is above all the change in mentality, convictions and attitudes, to which younger generations must be educated. Otherwise the same new structures, sooner or later, will no longer serve the common good, but particular groups, and will become corrupt, heavy and ineffective, and even harmful (cf EG, 189).

I ask God for the gifts of the Holy Spirit for you and for all the members of your union, so that the initiatives you undertake may always be inspired by the Christian rule: Bear one another's burdens (Gal 6: 2). Invoking the intercession of the Mother of God, Queen of Poland, I hope for the fruitful perseverance of your work of assistance and support. God bless you!
Testo originale nella lingua italiana
Texto en español
Tekst po polsku
at 08:14