Angelus about the resurrection of the dead

At noon today local time in Rome (6:00am EST), the Holy Father, Pope Francis appeared at the window of his study inside the Vatican Apostolic Palace to recite the Angelus with the faithful and with pilgrims gathered in Saint Peter's Square. 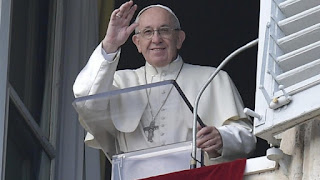 Today's gospel passage (cf Lk 20:27-38) offers us one of Jesus' wonderful teachings about the resurrection of the dead. Jesus was approached by some Sadducees, who did not believe in the resurrection and therefore aimed to provoke him with an insidious question: in the resurrection, a woman who has had seven successive husbands, all brothers among them, who one after the other are dead?, whose wife will she be?  Jesus did not fall into the trap but replied that in the beyond, those who are raised from the dead take neither wife nor husband: for they can no longer die, because they are equal to the angels and, since they are children of the resurrection, they are children of God (Lk 20:35-36). This is how Jesus answers.

With this answer, Jesus first invites his questioners - and us too - to think that this earthly dimension in which we live now is not the only dimension, but there is another dimension which is no longer subject to death, in which we will fully manifest the fact that we are children of God. It gives us great consolation and hope to listen to this simple and clear word of Jesus about life beyond death; we need it so much especially in our time, which is so rich in knowledge of the universe but so poor in wisdom about eternal life.

This clear certainty that Jesus demonstrates about the resurrection is based entirely on the fidelity of God, who is the God of life. In fact, behind the question of the Sadducees hides a deeper question: not only concerning who will the wife of seven husbands be married to, but from whom will her life be drawn. It is a doubt that touches humanity at all times and it also concerns us: after this earthly pilgrimage, what will become of our life? Will it belong to nothingness, to death?

Jesus answers this question by explaining that life belongs to God, who loves us and cares so much about us, to the point of linking his name to ours: he is the God of Abraham, the God of Isaac and the God of Jacob. God is not of the dead, but of the living; because everyone lives for him (Lk 20:37-38). Life exists where there is a bond, communion, brotherhood; and life is stronger than death when it is built on true relationships and bonds of fidelity. On the contrary, there is no life where one claims to belong only to oneself and to live as an island: in these attitudes death prevails. It is selfishness. If I live for myself, I am sowing death in my heart.

May the Virgin Mary help us to live every day in the perspective of what we affirm in the final part of the Creed: I await the resurrection of the dead and the life of the world to come. We are waiting for the beyond.

Yesterday in Granada (Spain), Blessed Maria Emilia Riquelme y Zayas, foundress of the Missionary Sisters of the Blessed Sacrament and of Mary Immaculate was beatified. And today, in Braga, (Portugal) a Mass of Thanksgiving is being celebrated for the equivalent canonization of Saint Bartholomew Fernandes of the Martyrs. The new Blessed was exemplary in her fervor for Eucharistic adoration and generous in service to the most needy; while the new Saint was a great evangelizer and pastor of his people. A round of applause to both of them!

I offer a special thought to the beloved people of South Sudan, which I will have to visit this year (next year). With the memory of the spiritual retreat for the Authorities of the Country, which held in the Vatican last April, still vivid in my memory, I wish to renew my invitation to all the actors of the national political process to seek what unites and to overcome what it divides, in a spirit of true brotherhood. The South Sudanese people have suffered too much in recent years and with great hope, they await a better future, especially the definitive end of conflicts and lasting peace. I therefore urge those responsible to continue their commitment to an inclusive dialogue in the search for consensus for the good of the nation. I also express the hope that the international community will not neglect this opportunity to accompany South Sudan on the path of national reconciliation. I invite you all to pray together with me for this country, for which I have a special affection.

I wish to entrust to your prayers the situation of beloved Bolivia, which is close to my homeland. I call on all Bolivians, especially political and social actors, to wait with a constructive spirit, without any prior conditions, in a climate of peace and serenity, for the results of the election review process which is currently underway. In peace.

Today in Italy the National Thanksgiving Day is celebrated for the fruits of the earth and of our labour. I join the Bishops in recalling the strong link between bread and work, hoping for courageous employment policies that take into account dignity and solidarity and which prevent the risks of corruption. May workers not be exploited, may there be work for everyone ... but real work, not slave labor.

I thank all of you who have come from Rome, Italy and many parts of the world. I greet the pilgrims from Haaren (Germany), from Darwin (Australia) and the students from Neuilly (France); as well as the faithful from the Diocese of Piacenza-Bobbio, those from Bianzè and from Burano.