This morning's General Audience began at 9:05am local time (3:05am EST) in Saint Peter's Square, where the Holy Father, Pope Francis met with groups of pilgrims and the faithful from Italy and from other parts of the world.

In his speech, the Pope continued the cycle of catechesis on the Acts of the Apostles, adding his meditation on the theme: He who you adore, without knowing him, I proclaim to you (Acts 17:23).  Paul at the Areopagus: an example of inculturation of the faith at Athens (Acts 17:22-23). 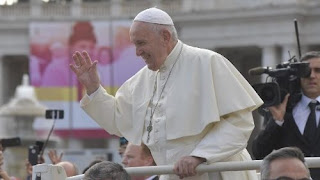 Let us continue our trip with the book of the Acts of the Apostles.  After the trials experienced at Philippi, Thessalonica and Berea, Paul arrived in Athens, right in the heart of Greece (cf Acts 17:15). This city, which lived in the shadow of ancient glories despite political decadence, still held the primacy of culture. Here, the Apostle trembled within himself to see the city full of idols (Acts 17:16). This impact with paganism, however, instead of providing him with a means to escape, pushed him to create a bridge for dialogue with that culture.

Paul chose to become familiar with the city and thus began to attend the most significant places and to visit the most influential people. He went to the synagogue, the symbol of the life of faith; he went to the square, the symbol of city life; and he went to the Areopagus, the symbol of political and cultural life. He met Jews, Epicurean and Stoic philosophers, and many others. He met all the people, he didn't quit, he went and talked to all the people. In this way Paul observed culture, he observed the environment of Athens starting with a contemplative gaze that discovers the God who lives in his houses, in his streets and in his squares" (Evangelii gaudium, 71). Paul did not look at the city of Athens and the world which pays with hostility but with the eyes of faith. And this makes us question our way of looking at our cities: do we observe them with indifference? With contempt? Or with the faith that recognizes the children of God in the midst of anonymous crowds?

Paul chose the look that drove him to break through the Gospel and the pagan world. In the heart of one of the most famous institutions of the ancient world, the Areopagus, he realized an extraordinary example of inculturation of the message of faith: he proclaimed Jesus Christ to idol worshipers, and he did not do so by attacking them, but by becoming pontiff, builder of bridges (Homily in Santa Marta, 8 May 2013).

Paul took his cue from the altar of the city dedicated to an unknown god (Acts 17:23) - there was an altar bearing the inscription to the unknown god; there was no image, nothing else, just that inscription. Starting with that devotion to the unknown god, to empathize with his listeners he proclaimed that God lives among the citizens (Evangelii gaudium, 71) and "does not hide himself from those who seek him with a sincere heart, although they do it gropingly (EG, 71). It is precisely this presence that Paul seeks to reveal: He who, without knowing him, you adore, I announce it to you (Acts 17:23).

To reveal the identity of the god that the Athenians adored, the Apostle started with creation, that is, with biblical faith in the God of revelation, to reach redemption and judgment, that is, the properly Christian message. He showed the disproportion between the greatness of the Creator and the temples built by man, and explained that the Creator always seeks to find out why everyone can find him. In this way Paul, according to a beautiful expression of Pope Benedict XVI, proclaimed the One whom men ignore, yet they know: the Unknown-Known (Benedict XVI, Meeting with the world of culture at the Collège des Bernardins, 12 Sept. 2008) . Then, he invited everyone to go beyond the times of ignorance and to choose conversion in view of imminent judgment. Thus, Paul arrives at the kerygma and alludes to Christ, without quoting him, defining him as the man whom God has designated, giving to all a certain proof of him by raising him from the dead (Acts 17.31).

And here is the problem. Paul's word, which until now had held his listeners with bated breath - because it was an interesting discovery - found a hurdle: the death and resurrection of Christ appeared as foolishness (1 Cor 1:23) and raised ridicule and derision. Paul then moved away: his attempt seems to have failed, but still some adhered to his word and opened themselves to faith. Among these was a man, Dionigi, a member of the Areopagus, and a woman, Damaris. Also in Athens the Gospel took root and could run in two voices: that of man and that of woman!

We too ask the Holy Spirit today to teach us to build bridges with culture, with those who do not believe or with those who have a creed that is different from ours. Always build bridges, always hold out an extended hand, with no aggression. Let us ask for the Holy Spirit's ability to gently inculturate the message of faith, placing a contemplative gaze on those who are ignorant of Christ, moved by a love that warms even the most hardened hearts.

The Holy Father's catechesis was then summarized in various languages and His Holiness offered greetings to each group of the faithful in attendance.  To English-speaking visitors, he said:

I welcome all the English-speaking pilgrims and visitors taking part in today’s Audience, especially those from England, Scotland, Malta, Zimbabwe, India, Indonesia, Israel, Malaysia, the Philippines and the United States of America. Upon all of you I invoke the joy and peace of our Lord Jesus Christ. God bless you!
Testo originale nella lingua italiana
at 08:08