This morning, at 9:15am local time (9:15pm EST Sunday), Pope Francis met with a group of Japanese young people involved in the Scholas Occurientes initiative in Japan, accompanied by a group from the Foundation.

Immediately afterwards, the Holy Father travelled by car to Bellesalle Hanzomon one of the most important convention centres in Tokyo. 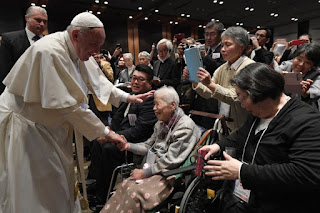 At 10:00am local time (10:00pm EST Sunday), the Pope met with victims of the magnitude 9 earthquake that then caused the tsunami and the disaster that occurred at the Fukushima nuclear centre in March 2011 which caused 18,000 deaths.

Upon his arrival, the Pope was welcomed at the entrance to the Bellesalle Hanzomon by the Archbishop of Tokyo, His Excellency, Tarcisius Isao Kikuchi, S.V.D., and by His Excellency, Martin Tetsuo Hiraga, Bishop of Sendai, the diocese that was the most severely affected by the earthquake and tsunami, and with them, His Holiness went to the auditorium.  Arriving at the podium, Pope Francis greeted a representative group of the victims from the triple disaster.  Then, following the testimonials of three of the victims, the Holy Father shared his speech.

At the conclusion of the gathering, the Pope left the auditorium while a song was being sung.  Then, he travelled by car to the Imperial Palace in Tokyo for a private visit with Emperor Naruhito. 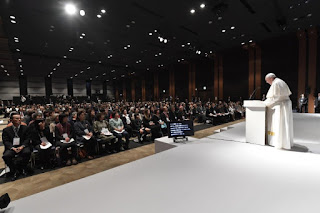 Greetings of the Holy Father, Pope Francis
with victims of the triple disaster

This meeting with you today is an important part of my visit to Japan. I thank all of you for welcoming me with music from Argentina. In a special way, I thank Toshiko, Tokuun and Matsuki, who shared their stories with us. They, and all of you, represent everyone who suffered so greatly as a result of the triple disaster – the earthquake, the tsunami and the nuclear accident – that affected not only the prefectures of Iwate, Miyagi and Fukushima but the whole of Japan and its inhabitants. Thank you for expressing in your words and by your presence the sorrow and pain, but also the hope of a better future, experienced by so many. At the end of his testimony, Matsuki invited me to join you in prayer. Let us spend a moment in silence, so that our first word will be one of prayer for the more than eighteen thousand people who lost their lives, for their families and for those who are still missing. Let us pray that we be united and given the courage to look forward with hope.

Let us also give thanks for the efforts of the local governments, organizations and individuals working for the reconstruction of the areas where the disasters struck, and for the relief of the over fifty thousand persons who have been evacuated and are living in temporary housing, still unable to return to their homes.

I especially appreciate, as Toshiko pointed out, the speed with which many people, not only from Japan, but from all over the world, mobilized immediately after the disasters to support the victims with an outpouring of prayers and material and financial aid. We should not let this action be lost with the passage of time or disappear after the initial shock; rather, we should continue and sustain it. As Matsuki told us, some of those who lived in the affected areas now feel forgotten by others, and many must face ongoing problems: contaminated land and forests and the long-term effects of radiation.

May this meeting help us to appeal together to all persons of good will, so that the victims of these tragedies will continue to receive much needed assistance.

Without basic resources such as food, clothing and shelter, it is not possible to live a worthy life and have the bare minimum needed to succeed in rebuilding. This, in turn, calls for experiencing the solidarity and support of a community. No one rebuilds by himself or herself; nobody can start over alone. We have to find a friendly and fraternal hand, capable of helping to raise not just a city, but also our horizon and our hope. Toshiko told us that although she lost her home in the tsunami, she is still thankful for being able to appreciate the gift of life, and for the experience of hope that came from seeing people come together to help one another. Eight years after the triple disaster, Japan has shown how a people can unite in solidarity, patience, perseverance and resilience. The path to a full recovery may still be long, but it can always be undertaken if it counts on the spirit of people capable of mobilizing in order to help one another. As Toshiko said, if we do nothing, the result will be zero. But whenever you take one step, you move one step forward. I invite you, then, to move forward each day, little by little, to build a future based on solidarity and commitment to one another, for yourselves, your children and grandchildren, and for the generations to come.

Tokuun asked how we can respond to other major issues we face: wars, refugees, food, economic disparities and environmental challenges. These, as you well know, cannot be understood or treated separately. It is a serious mistake to think that nowadays these issues can be dealt with in isolation, without viewing them as part of a much larger network. He rightly pointed out that we are part of this earth, part of the environment, inasmuch as everything is, in the end, interconnected. Important decisions will have to be made about the use of natural resources, and future energy sources in particular. But the most important thing, I believe, is to progress in building a culture capable of combating indifference. One of our greatest ills has to do with a culture of indifference. We need to work together to foster awareness that if one member of our family suffers, we all suffer. Real interconnectedness will not come about unless we cultivate the wisdom of togetherness, the only wisdom capable of facing problems (and solutions) in a global way. We are part of one another.

Here, I would like to mention, in a particular way, the accident at the Daiichi Nuclear Power Station in Fukushima and its aftermath. In addition to scientific or medical concerns, there is also the immense challenge of restoring the fabric of society. Until social bonds in local communities are re-established, and people can once more enjoy safe and stable lives, the Fukushima accident will not be fully resolved. In turn, this involves, as my brother bishops in Japan have emphasized, concern about the continuing use of nuclear power; for this reason, they have called for the abolition of nuclear power plants.

Our age is tempted to make technological progress the measure of human progress. This “technocratic paradigm” of progress and development shapes the lives of individuals and the workings of society, and often leads to a reductionism that affects every aspect of human and social life (cf Laudato Si’, 101-114). So it is important at times like this, to pause and reflect upon who we are and, perhaps more critically, who we want to be. What kind of world, what kind of legacy, will we leave to those who will come after us? The wisdom and experience of elders, united to the zeal and enthusiasm of young people, can help to forge a different vision, one that fosters reverence for the gift of life and solidarity with our brothers and sisters in the one multiethnic and multicultural human family.

As we think about the future of our common home, we need to realize that we cannot make purely selfish decisions, and that we have a great responsibility to future generations. Consequently, we must choose a humble and sober way of life that recognizes the urgent realities we are called to face. Toshiko, Tokuun and Matsuki have each reminded us of the need to find a new path for the future, a path rooted in respect for each person and in respect for the natural world. Along this path, all of us can cooperate as instruments of God for the care of creation, each according to his or her own culture, experience, involvements and talents (LS, 14).

Dear friends, in the ongoing work of recovery and rebuilding after the triple disaster, many hands must join together and many hearts unite as one. In this way, those who are suffering will be supported and know that they have not been forgotten. They will realize that many people actively and effectively share their sorrow and continue to extend a fraternal helping hand. Once again, I thank all those who, in ways large and small, have tried to ease the burdens of the victims. May that compassion be the path that enables all to find hope, stability and security for the future.

Thank you again for being here. Please pray for me. And may God grant to all of you, and to your loved ones, his blessings of wisdom, strength and peace. Thank you.
Texto original en español
Testo in italiano
Texte en français
Texto em português