Japan: Meeting with the Dignitaries

At 6:15pm local time (6:15am EST Monday), the Holy Father, Pope Francis met privately with the Prime Minister of Japan, His Excellency, Shinzō Abe, inside the Special Guest Room at the Kantei.

At the conclusion of their meeting, after the exchange of gifts, the Prime Minister and the Pope went together to the grand salon where there was a meeting with the local Authorities and with members of the Diplomatic Corps in Japan. 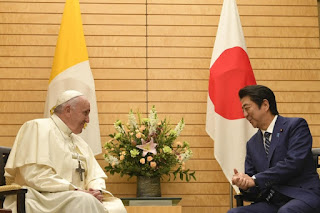 At 6:50pm local time (6:50am EST Monday), in the grand salon at the Kantei, the Holy Father, Pope Francis met with members of the Diplomatic Corps who are accredited to Japan.

After some words of greeting offered by the Prime Minister, His Excellency, Shinzō Abe, the Pope shared his speech.

Afterwards, the Prime Minister and the Holy Father went to the main entrance where they bid each other farewell.  The Pope returned by car to the Apostolic Nunciature. 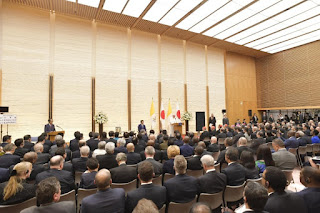 Greetings of the Holy Father, Pope Francis
offered to members of the Diplomatic Corps

I thank the Prime Minister for his kind words of introduction and I offer respectful greetings to you, distinguished authorities and members of the diplomatic corps. Each of you, in his or her own way, is devoted to working for peace and prosperity for the people of this noble nation and the nations that you represent. I am grateful in a special way to Emperor Naruhito for having received me this morning. I offer him my good wishes and I invoke God’s blessings on the Imperial Family and all the Japanese people at the beginning of the new era inaugurated by his reign.

The friendly relations existing between the Holy See and Japan are long-standing and rooted in the appreciation and admiration felt by the first missionaries for these lands. We have only to recall the words of the Jesuit Alessandro Valignano, who in 1579 wrote: Whoever wishes to see what our Lord has bestowed upon man need only come to Japan to see it. Historically, many contacts and cultural and diplomatic missions have fostered this relationship and helped to surmount moments of tension and trouble. These contacts have gradually taken on institutional form, for the benefit of both parties.

I have come to confirm Japanese Catholics in their faith, their charitable outreach to those in need and their service to the country of which they are proud citizens. As a nation, Japan is particularly sensitive to the suffering of those less fortunate, the handicapped and the disabled. The theme of my visit is Protect All Life, in the recognition of its inviolable dignity and the importance of showing solidarity and support to our brothers and sisters in any kind of need. I have had a powerful experience of this in listening to the stories of those affected by the triple disaster, and was touched by the hardships that they have endured.

In the footsteps of my predecessors, I have also come to implore God and to invite all persons of good will to encourage and promote every necessary means of dissuasion so that the destruction generated by atomic bombs in Hiroshima and Nagasaki will never take place again in human history. History teaches us that conflicts and misunderstandings between peoples and nations can find valid solutions only through dialogue, the only weapon worthy of man and capable of ensuring lasting peace. I am convinced of the need to deal with the nuclear question on the multilateral plane, promoting a political and institutional process capable of creating a broader international consensus and action.

A culture of encounter and dialogue, marked by wisdom, insight and breadth of vision, is essential for building a more just and fraternal world. Japan has recognized the importance of promoting personal contacts in the fields of education, culture, sport and tourism, knowing that these can contribute in no small measure to the harmony, justice, solidarity and reconciliation that are the mortar of the edifice of peace. We see an outstanding example of this in the Olympic spirit, which unites athletes from throughout the world in a competition based not necessarily on rivalry but rather on the pursuit of excellence. I am confident that the Olympic and Paralympic Games, to be held in Japan this coming year, can serve as an impetus for a spirit of solidarity that transcends national and regional borders and seeks the good of our entire human family.

In these days, I have experienced and have come to esteem once more the precious cultural heritage that Japan throughout many centuries of its history has been able to develop and preserve, and the profound religious and moral values that characterize this ancient culture. Good relations between the different religions are not only essential for a future of peace, but for training present and future generations to cherish the ethical principles that serve as the foundation for a truly just and humane society. In the words of the Document on Human Fraternity that I signed with the Grand Imam of Al-Azhar last February, our shared concern for the future of the human family impels us to the adoption of a culture of dialogue as the path; mutual cooperation as the code of conduct; reciprocal understanding as the method and standard.

No visitor to Japan can fail to be moved by the sheer natural beauty of this country, long celebrated by its poets and artists, and symbolized above all by the image of the cherry blossom. Yet the very delicacy of the cherry blossom reminds us of the fragility of our common home, subjected not only to natural disasters but also to greed, exploitation and devastation at the hands of human beings. As the international community struggles to honor its commitments to protecting creation, it is the young who are increasingly speaking up and demanding courageous decisions. They challenge us to see that the world is not a possession to be squandered, but a precious legacy to be handed down. For our part, we owe them real answers, not empty words; actions not illusions (Message for the 2019 World Day of Prayer for the Care of Creation).

In this regard, an integral approach to the protection of our common home must also consider its human ecology. A commitment to protection means confronting the growing gap between rich and poor in a global economic system that enables a select few to dwell in opulence while the majority of the world’s population lives in poverty. I am aware of the concern of the Japanese government for the promotion of different programs in this regard, and I encourage it to persevere in shaping a growing awareness of co-responsibility among the world’s nations.

Human dignity needs to be at the center of all social, economic and political activity; intergenerational solidarity must be fostered, and at every level of community life concern must be shown for those who are forgotten and excluded. I think particularly of the young, who so often feel overwhelmed in facing the challenges of growing up, the elderly and the lonely who suffer from isolation. We know that, in the end, the civility of every nation or people is measured not by its economic strength, but by the attention it devotes to those in need and its capacity to be fruitful and promote life.

Now, as my visit to Japan draws to a close, I once again express my gratitude for the invitation I received, the gracious hospitality with which I have been met, and the generosity of all those who contributed to its happy outcome. In presenting these thoughts for your consideration, I wish to encourage you in your efforts to shape a social order ever more protective of life, ever more respectful of the dignity and rights of each member of our human family. Upon you and your families, and all those whom you serve, I invoke an abundance of divine blessings. Thank you very much.
Texto original en español
Testo in italiano
Texte en français
Texto em português