From Thailand to Japan

This morning, after celebrating a private Mass, at 8:20am local time (8:20pm Friday evening EST), the Holy Father, Pope Francis bid farewell to the personnel and the benefactors of the Apostolic Nunciature in Bangkok and travelled by car to the Military Air Terminal 2 in that city for a ceremony marking his departure from Thailand.

Upon his arrival, at 9:15am local time (9:15pm Friday, EST), the Pope was welcomed by a Member of the Crown Council and, before inspecting the Guard of Honour, they greeted 11 Thai children, the Bishops, the local organizing team and some Thai Authorities.  Then, the Holy Father received a bouquet of flowers from the Vice Prime Minister of Thailand and boarded a Thai Airways International A330 jet for his flight to Tokyo.

The aircraft carrying the Holy Father, which left the Airport in Bangkok at 9:54am local time (9:54pm Friday, EST), landed at the Tokyo-Haneda Airport at 5:25pm local time (5:25am Saturday, EST). 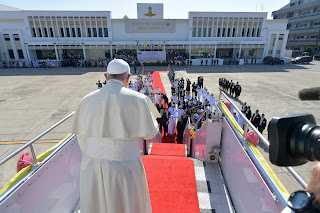 Telegram of the Holy Father, Pope Francis
to the King of Thailand

Immediately upon his departure from Bangkok, the Holy Father sent the following telegram to the King of Thailand, Maha Vajiralongkorn Rama X.

As I leave Thailand to continue my Apostolic Journey to Japan, I renew my deep appreciation to Your Majesty, the Royal Family and the beloved people of Thailand for your warm welcome and generous hospitality.  Invoking abundant divine blessings upon all of you, I offer the assurance of my prayers for peace and harmony in the nation. 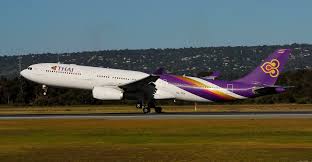 During the flight from Bangkok to Tokyo, while flying over Laos, Vietnam, China, Hong Kong and Taiwan, the Holy Father sent the following telegrams to the respective Heads of State:

While flying over Laos

I extend cordial greetings to Your Excellency and your fellow citizens, as I enter Laotian air space.  Praying that your nation may be blessed with peace and well-being, I invoke divine blessings upon all.

While flying over Vietnam

His Excellency, Nguyên Phú Trong
President of the Socialist Republic of Vietnam
Hanoi

As I fly over Vietnam on my way to Japan, I extend to Your Excellency and your fellow citizens my best wishes.  Invoking divine blessings upon you all, I pray that peace and well-being may flourish in the nation.

While flying over China

His Excellency, Xi Jinping
President of the People's Republic of China
Bejing

I send cordial greetings to Your Excellency as I fly over China on my way to Japan.  I assure you of my prayers for the nation and its people, invoking upon all of you abundant blessings of peace and joy.

While flying over Hong Kong

As I fly over your territory, I extend my best wishes to Your Excellency and your fellow citizens.  Invoking divine blessings, I pray that Almighty God may grant you all well-being and peace.

Her Excellency, Tsai Ing-Wen
President of the Republic of China (Taiwan)
Taipei

As I enter the airspace of Taiwan on my way to Japan, I send cordial greetings to Your Excellency and your fellow citizens.  Assuring you of my prayers for all the people of Taiwan, I invoke abundant divine blessings of peace. 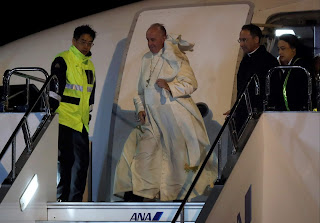 Upon his arrival at the Tokyo-Haneda Airport, the Holy Father was welcomed at the foot of the aircraft stairs by the Vice Prime Minister of Japan, His Excellency, Tarõ Asõ.  Two children dressed in traditional attire offered a floral bouquet, along with approximately 100 students from Catholic schools who were also in attendance.  Then, after the members of the respective delegations had met one another, and having inspected the Guard of Honour, the Pope and the Vice Prime Minister spent a few moments together in private conversation in the VIP 3 room inside the airport.

After their conversation, the Pope travelled by car to the Apostolic Nunciature in Tokyo where, upon his arrival, he was welcomed in the courtyard by a group of 200 faithful, and at the entrance to the building by the personnel of the Nunciature.
at 08:43