This morning's General Audience began at 9:00am local time (3:00am EST) in Saint Peter's Square where the Holy Father, Pope Francis met with groups of pilgrims and the faithful from Italy and from all corners of the world.

In his speech, the Pope focused his meditation on his Apostolic Voyage to Thailand and Japan which concluded yesterday (Mt 28:16-20). 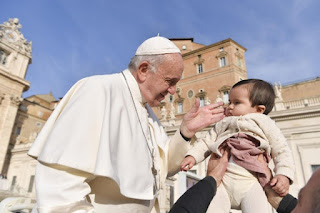 Yesterday, I returned from the Apostolic journey to Thailand and Japan, a gift for which I am very grateful to the Lord.  I wish to renew my gratitude to the Authorities and to the Bishops of these two countries, who invited me and welcome me with great concern, and above all, I wish to thank the Thai people and the Japanese people.  This visit has increased my closeness and affection for these people: may God bless them with an abundance of prosperity and peace.

Thailand is an ancient kingdom that has greatly modernized. Meeting the King, the Prime Minister and the other Authorities, I paid tribute to the rich spiritual and cultural tradition of the Thai people, the people of the beautiful smile. The people had their smiles. I encouraged the commitment to harmony between the different components of that nation, as well as economic development to benefit everyone and to eliminate the scourges of exploitation, especially that of women and minors. The Buddhist religion is an integral part of the history and life of this people, so I visited the Supreme Patriarch of the Buddhists, continuing on the path of mutual esteem initiated by my Predecessors, so that compassion and fraternity grow in the world. In this sense, the ecumenical and inter-religious meeting, which took place in the largest university in the country, was very significant.

The witness of the Church in Thailand also includes works of service to the sick and the least. Among these, one of those that excels is the Saint Louis Hospital, which I visited to encourage health personnel and to meet some of the patients. I then dedicated specific moments to priests and consecrated persons, to bishops, and also to Jesuit confreres. In Bangkok I celebrated Mass with all the people of God in the National Stadium and then with the youth in the Cathedral. There we experienced the truth that in the new family formed by Jesus Christ there are also the faces and voices of the Thai people.

Then, I went to Japan.  Upon my arrival at the Nunciature in Tokyo, I was welcomed by the Bishops of the country, with whom I immediately shared the challenge of being pastors of a very small Church, but also carriers of the water of life, the gospel of Jesus.

Protecting every life was the motto of my visit to Japan, a country that bears the scars of atomic bombing and is the spokesman of the fundamental right to life and peace for the whole world. In Nagasaki and Hiroshima I remained in prayer, I met some survivors and family members of the victims, and I reiterated the firm condemnation of nuclear weapons and the hypocrisy of talking about peace by building and selling war bombs. After that tragedy, Japan demonstrated an extraordinary ability to fight for life; and it has done so recently, after the triple disaster of 2011: an earthquake, a tsunami and an accident at the nuclear power plant.

To protect life we must love it, and today the grave threat, in the most developed countries, is the loss of the sense of living.

The first victims of lacking a sense of life are young people, so one of my meetings in Tokyo was dedicated to them. I listened to their questions and their dreams; I encouraged them to oppose together all forms of bullying, and to overcome fear and closure by opening themselves to the love of God in prayer and in service to others. I met other young people at the Sophia University, together with the academic community. This University, like all Catholic schools, is very popular in Japan.

In Tokyo I had the opportunity to visit Emperor Naruhito, to whom I renew the expression of my gratitude; and I met the country's Authorities along with members of the Diplomatic Corps. I hoped for a culture of encounter and dialogue, characterized by wisdom and breadth of horizon. Remaining faithful to its religious and moral values, and open to the Gospel message, Japan could be a leading country toward a more just and peaceful world and toward harmony between man and the environment.

Dear brothers and sisters, let us entrust the people of Thailand and Japan to the goodness and providence of God.  Thank you.

The Holy Father's catechesis was then summarized in various languages and His Holiness offered greetings to each group of pilgrims in attendance.  To English-speaking visitors, he said:

I greet the English-speaking pilgrims and visitors taking part in today’s Audience, especially the groups from England, Australia, Canada and the United States of America. Upon all of you, and your families, I invoke the joy and peace of our Lord Jesus Christ. May God bless you!
Testo originale nella lingua italiana
at 16:25