Japan: Meeting with the Bishops

This evening, upon his arrival at the Apostolic Nunciature in Tokyo, the Holy Father, Pope Francis met with the Bishops of the Japanese Episcopal Conference in the dining room of that Pontifical Representation. 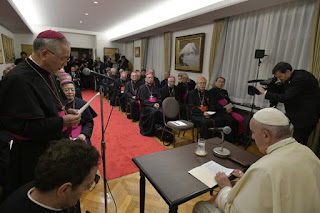 The meeting began with a brief greeting offered by His Excellency, Joseph Mitsuaki Takami, P.S.S.,
Archbishop of Nagasaki and President of the Japanese Episcopal Conference.  The Pope then shared his speech and responded to questions asked by some of the Bishops.

Afterwards, after having individually greeted the Bishops who were in attendance, Pope Francis posed for a group photograph. 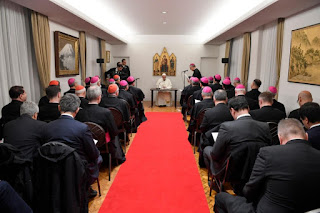 Greetings of the Holy Father, Pope Francis
offered to the Bishops of Japan

First of all, I need to offer my excuses and apologize for entering without greeting anyone. How rude we Argentinians are! I am sorry for that. It is a pleasure to be here with you. The Japanese are famous for being methodical and hardworking, and here is the proof: the Pope gets off the plane and they put to him work straightaway! Thank you very much.

I am very grateful for the gift of visiting Japan and for the welcome you have given me. I especially thank Archbishop Takami for his words on behalf of the entire Catholic community in this country. Here in your presence, in this first official meeting, I want to greet each one of the members of your communities: lay people, catechists, priests, religious, consecrated persons, seminarians. I also want to extend my embrace and prayers to all the Japanese people at this time marked by the enthronement of the new Emperor and the beginning of the Reiwa era.

I don’t know if you are aware of this, but ever since I was young I have felt a fondness and affection for these lands. Many years have passed since that missionary impulse, whose realization has been long in coming. Today the Lord gives me the opportunity to come among you as a missionary pilgrim in the footsteps of great witnesses to the faith. Four hundred and seventy years have passed since the arrival of Saint Francis Xavier in Japan, which marked the beginning of the spread of Christianity in this land. In his memory, I want to join you in thanking the Lord for all those who, over the centuries, have dedicated themselves to implanting the Gospel and serving the Japanese people with great tenderness and love. This dedication has given the Japanese Church a unique face. I think of the martyrs Saint Paul Miki and his companions, and of Blessed Justo Takayama Ukon, who in the midst of many trials bore witness up to his death. Such self-sacrifice for the sake of keeping the faith alive amid persecution helped the small Christian community to develop, grow strong and bear fruit. We can also think of those “hidden Christians” of the Nagasaki region, who kept the faith for generations, thanks to baptism, prayer and catechesis. Authentic domestic Churches that shone forth in this land, perhaps without even realizing it, as reflections of the Holy Family of Nazareth.

The path taken by the Lord shows us how his presence “plays out” in the daily life of his faithful people, who seek ways to keep his memory alive. His is a silent presence, a living memory that makes us realize that wherever two or more are gathered in his name, he is there, with the strength and tenderness of his Spirit (cf Mt 18:20). The DNA of your communities is marked by this witness, an antidote against despair, that points out the path they must follow. You are a living Church that has been preserved by invoking the Lord’s name and contemplating how he guided you through the midst of persecution.

Faithful sowing, the witness of martyrs and patient expectation of the fruits that the Lord gives in his time, have characterized your apostolic approach to Japanese culture. As a result, over the years you have developed a form of ecclesial presence that is for the most part much appreciated by Japanese society, thanks to your many contributions to the common good. This important chapter in the history of your country and of the universal Church has now been recognized with the designation of the churches and villages of Nagasaki and Amakusa as World Cultural Heritage sites. But above all, as living memorials of the soul of your communities, a fruitful hope for every form of evangelization.

The motto of my Apostolic Journey is Protect All Life. This could well symbolize our own ministry as bishops. A bishop is called by the Lord from among his people, and then given back to them as a pastor called to protect all life. This determines in great measure what our aims and goals should be.

The mission in these lands was marked by a powerful search for inculturation and dialogue, which allowed the formation of new models, independent of those developed in Europe. We know that, from the beginning, literature, theatre, music and various types of instruments were employed, for the most part in the Japanese language. This is a sign of the love that those first missionaries felt for these lands. Protecting all life means, first of all, having a contemplative gaze capable of loving the life of the entire people entrusted to you, and recognizing it, above all, as the Lord’s gift. Only that which is loved can be saved. Only that which is embraced can be transformed (Address at the Vigil with Young People, Panama, 26 January 2019). An incarnational principle that can help us view each life as a gratuitous gift, apart from other valid yet secondary considerations. Protecting all life and proclaiming the Gospel are not separate or opposed; rather each appeals to, and requires, the other. Both entail being careful and vigilant about anything that could hinder, in these lands, the integral development of the people entrusted to the light of the Gospel of Jesus.

We know that the Church in Japan is small and Catholics are in a minority, but this must not diminish your commitment to evangelization. In your particular situation, the strongest and clearest word you can speak is that of a humble, daily witness and openness to dialogue with other religious traditions. The hospitality and care you show to the many foreign workers who represent more than half of Japan’s Catholics, not only serve as a witness to the Gospel within Japanese society, but also attest to the universality of the Church. This demonstrates that our union with Christ is stronger than any other bond or badge of identity, and can enter into and become part of every situation.

A Church of witness can speak with greater freedom, especially when addressing pressing issues of peace and justice in our world. Tomorrow I will visit Nagasaki and Hiroshima, where I will offer prayers for the victims of the catastrophic bombing of these two cities, and echo your own prophetic calls for nuclear disarmament. I wish to meet those who still bear the wounds of this tragic episode in human history, as well as the victims of the triple disaster. Their continued sufferings are an eloquent reminder of our human and Christian duty to assist those who are troubled in body and spirit, and to offer to all the Gospel message of hope, healing and reconciliation. Let us remember that evil has no preferences; it does not care about people’s background or identity. It simply bursts in with its destructive force, as was the case recently with the devastating typhoon that caused so many casualties and material damage. Let us entrust to the Lord’s mercy those who have died, their families and all who have lost their homes and material possessions. May we never be afraid to pursue, here and throughout the world, a mission capable of speaking out and defending all life as a precious gift from the Lord.

For this reason, I encourage your efforts to ensure that the Catholic community in Japan offers a clear witness to the Gospel in the midst of the larger society. The Church’s highly respected educational apostolate represents a great resource for evangelization and engagement with larger intellectual and cultural currents; the quality of its contribution will naturally depend on the fostering of its distinctively Catholic identity and mission.

All of us are aware of the grave problems affecting people in your communities whose lives are marked, for various reasons, by loneliness, despair and isolation. The increase in the rates of suicide in your cities, as well as bullying (ijime) and various kinds of neediness, are creating new forms of alienation and spiritual disorientation. Since these affect the young in particular, I ask you to pay special attention to them and their needs. Try to create spaces in which the culture of efficiency, performance and success can become open to a culture of generous and selfless love, capable of offering to everyone, and not only to those who have “made it”, the possibility of a happy and successful life. With their zeal, ideas and energy, young people – when well-formed and accompanied – can be a deep source of hope to their contemporaries and bear vital witness to Christian charity. A creative, inculturated and imaginative quest to live the Gospel message can have a powerful effect on so many lives thirsting for compassion.

I recognize that the harvest is great and the labourers are few. I encourage you to seek out and develop a mission capable of involving families and of promoting a formation that can reach people where they are, always taking into account the specifics of each situation. The starting point for every apostolate is the concrete place in which people find themselves, with their daily routines and occupations, not in artificial places. It is there that we must reach the souls of our cities, workplaces and universities, in order to accompany the faithful entrusted to us with the Gospel of compassion and mercy.

I thank you once more for the opportunity you have offered me to visit your local Churches and to celebrate together with them. Peter wants to confirm you in faith, but Peter also comes to walk in, and be renewed by, the footsteps of so many martyrs and witnesses to the faith. Please pray that the Lord may grant me this grace.

And I ask the Lord to bless you and, with you, to bless your communities. Thank you very much.
Texto original en español
Testo in italiano
Texte en français
Texto em português
at 09:42