Cape Verde at the Vatican 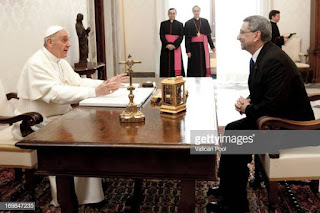 This morning, His Excellency, Jorge Carlos de Almeida Fonseca, President of the Republic of Cape Verde, was received in audience by the Holy Father, Pope Francis, and he subsequently met with His Eminence, Cardinal Pietro Parolin, the Secretary of State and with Monsignor Mirosław Wachowski, Under-secretary for Relations with States.

During the discussions, which took place in a cordial climate, the good bilateral relations were evoked, relations which have been further strengthened by the Agreement between the Holy See and the Republic of Cape Verde, which entered into effect on 3 April 2014. Satisfaction was also expressed for the positive steps recently taken toward the implementation of part of the same Agreement, in hopes of its complete implementation in the near future. In this context, they did not fail to refer to the importance of moral and religious education in public schools in the country aimed at promoting family and society values. Mention was also made of the beatification process for a slave by the name of Manuel, who was born in Cape Verde.

Subsequently, reference was made to some issues of national and regional interest, including the phenomenon of migration and peacekeeping in West Africa.
at 11:58