This morning, leaving the Apostolic Nunciature in Tokyo, the Holy Father, Pope Francis travelled by car to the Tokyo-Haneda airport and departed - at 7:45am local time (7:45pm EST Saturday) - aboard a Nippon Airways A321 and flew to Nagasaki. 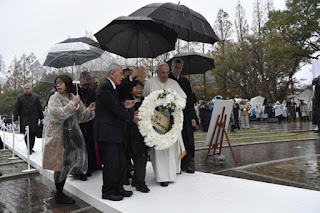 Upon his arrival at the Nagasaki airport, at 9:20am local time (9:20pm EST Saturday), the Pope was welcomed by some civil and ecclesial authorities and by two children dressed in traditional attire who offered him some flowers.  Then, he travelled by car to the Atomic Bomb Hypocenter Park in Nagasaki, situated inside the Peace Park. 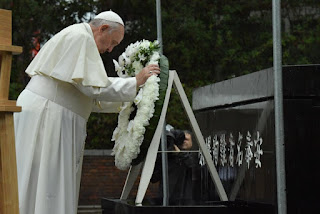 Upon his arrival at the Atomic Bomb Hypocenter, Pope Francis was welcomed by the Governor and by the Mayor of Nagasaki.  Near the podium, two victims offered the Holy Father a wreath of white flowers which he placed at the foot of the monument.  The Pope then lit a candle and, after pausing in silent prayer before the Monument, he read his Message concerning Nuclear Arms. 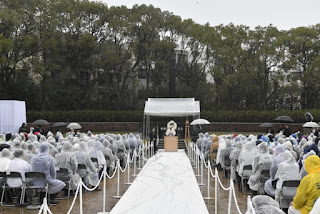 While the concluding song was sung, the Holy Father greeted the wife and son of the photographer Joe O'Donnell, the author of the symbolic image of the atomic explosion that took place at Nagasaki.  Then, the Holy Father travelled by car to Nishizaka Hill, the place where, in 1597, Saint Paul Miki was executed along with 25 other martyrs. 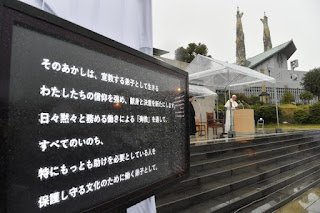 This place makes us deeply aware of the pain and horror that we human beings are capable of inflicting upon one another. The damaged cross and statue of Our Lady recently discovered in the Cathedral of Nagasaki remind us once more of the unspeakable horror suffered in the flesh by the victims of the bombing and their families.

One of the deepest longings of the human heart is for security, peace and stability. The possession of nuclear and other weapons of mass destruction is not the answer to this desire; indeed they seem always to thwart it. Our world is marked by a perverse dichotomy that tries to defend and ensure stability and peace through a false sense of security sustained by a mentality of fear and mistrust, one that ends up poisoning relationships between peoples and obstructing any form of dialogue.

Peace and international stability are incompatible with attempts to build upon the fear of mutual destruction or the threat of total annihilation. They can be achieved only on the basis of a global ethic of solidarity and cooperation in the service of a future shaped by interdependence and shared responsibility in the whole human family of today and tomorrow.

Here in this city which witnessed the catastrophic humanitarian and environmental consequences of a nuclear attack, our attempts to speak out against the arms race will never be enough. The arms race wastes precious resources that could be better used to benefit the integral development of peoples and to protect the natural environment. In a world where millions of children and families live in inhumane conditions, the money that is squandered and the fortunes made through the manufacture, upgrading, maintenance and sale of ever more destructive weapons, are an affront crying out to heaven.

A world of peace, free from nuclear weapons, is the aspiration of millions of men and women everywhere. To make this ideal a reality calls for involvement on the part of all: individuals, religious communities and civil society, countries that possess nuclear weapons and those that do not, the military and private sectors, and international organizations. Our response to the threat of nuclear weapons must be joint and concerted, inspired by the arduous yet constant effort to build mutual trust and thus surmount the current climate of distrust. In 1963, Saint John XXIII, writing in his Encyclical Letter Pacem in Terris, in addition to urging the prohibition of atomic weapons (cf No. 112), stated that authentic and lasting international peace cannot rest on a balance of military power, but only upon mutual trust (cf No. 113).

There is a need to break down the climate of distrust that risks leading to a dismantling of the international arms control framework. We are witnessing an erosion of multilateralism which is all the more serious in light of the growth of new forms of military technology. Such an approach seems highly incongruous in today’s context of interconnectedness; it represents a situation that urgently calls for the attention and commitment of all leaders.

For her part, the Catholic Church is irrevocably committed to promoting peace between peoples and nations. This is a duty to which the Church feels bound before God and every man and woman in our world. We must never grow weary of working to support the principal international legal instruments of nuclear disarmament and non-proliferation, including the Treaty on the prohibition of nuclear weapons. Last July, the bishops of Japan launched an appeal for the abolition of nuclear arms, and each August the Church in Japan holds a ten-day prayer meeting for peace. May prayer, tireless work in support of agreements and insistence on dialogue be the most powerful “weapons” in which we put our trust and the inspiration of our efforts to build a world of justice and solidarity that can offer an authentic assurance of peace.

Convinced as I am that a world without nuclear weapons is possible and necessary, I ask political leaders not to forget that these weapons cannot protect us from current threats to national and international security. We need to ponder the catastrophic impact of their deployment, especially from a humanitarian and environmental standpoint, and reject heightening a climate of fear, mistrust and hostility fomented by nuclear doctrines. The current state of our planet requires a serious reflection on how its resources can be employed in light of the complex and difficult implementation of the 2030 Agenda for Sustainable Development, in order to achieve the goal of an integrated human development. Saint Paul VII suggested as much in 1964, when he proposed the establishment of a Global Fund to assist those most impoverished peoples, drawn partially from military expeditures (cf Declaration to Journalists, 4 December 1964; Populorum Progressio, 51).

All of this necessarily calls for the creation of tools for ensuring trust and reciprocal development, and counts on leaders capable of rising to these occasions. It is a task that concerns and challenges every one of us. No one can be indifferent to the pain of millions of men and women whose sufferings trouble our consciences today. No one can turn a deaf ear to the plea of our brothers and sisters in need. No one can turn a blind eye to the ruin caused by a culture incapable of dialogue.

I ask you to join in praying each day for the conversion of hearts and for the triumph of a culture of life, reconciliation and fraternity. A fraternity that can recognize and respect diversity in the quest for a common destiny.

I know that some here are not Catholics, but I am certain that we can all make our own the prayer for peace attributed to Saint Francis of Assisi:

In this striking place of remembrance that stirs us from our indifference, it is all the more meaningful that we turn to God with trust, asking him to teach us to be effective instruments of peace and to make every effort not to repeat the mistakes of the past.

May you and your families, and this entire nation, know the blessings of prosperity and social harmony!
Texto original en español
Testo in italiano
Texte en français
Testo em português