At 1:20pm local time (1:00am EST Sunday), the Holy Father, Pope Francis left the Archbishop's residence and travelled to the Baseball Stadium in Nagasaki for the celebration of Holy Mass.

Before leaving the Archbishop's residence, the Pope greeted 16 Curial employees.  Then, 30,000 intercessory prayers, which were written during the days of his visit by 12,000 families throughout the Diocese of Nagasaki were presented to His Holiness.  Each prayer given to the Pope was written on a small piece of coloured cardboard and folded into the form of a crane. 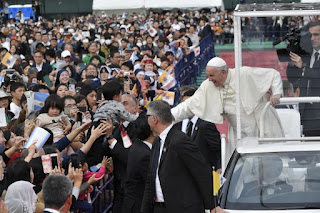 Upon his arrival at the Stadium, after having changed vehicles, the Pope travelled through the crowd aboard the popemobile.

At 2:00pm local time (2:00am EST Saturday), the Holy Father, Pope Francis presided over the Eucharistic Celebration for the Solemnity of Our Lord Jesus Christ, King of the Universe in the presence of approximately 30,000 faithful.  Beside the altar, was a wooden statue of the Madonna from the old Urakami Cathedral in Nagasaki, which was destroyed when the atomic bomb exploded; the remains of the statue were recently recovered and taken to the new Cathedral.  After the proclamation of the gospel, the Holy Father shared his homily. 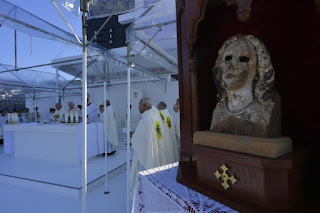 At the conclusion of the Eucharistic Celebration, before the final blessing, the Archbishop of Nagasaki, His Excellency, Joseph Mitsuaki Takami, PSS offered Pope Francis a few words of greeting.  Then, the Holy Father travelled by car to the airport in Nagasaki where, at 4:34pm local time (4:34am EST Saturday), after having greeted 15 people from the Archdioceses, left aboard a Nippon Airways A321 and flew to Hiroshima. 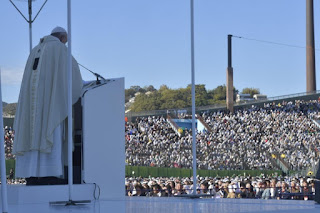 Homily of the Holy Father, Pope Francis
during the Mass celebrated at Nagasaki

On this last Sunday of the liturgical year, we join our voices to that of the criminal crucified beside Jesus, who acknowledged and acclaimed him a king. Amid cries of ridicule and humiliation, at the least triumphal and glorious moment possible, that thief was able to speak up and make his profession of faith. His were the last words Jesus heard, and Jesus’ own words in reply were the last he spoke before abandoning himself to the Father: Truly I say to you, today you will be with me in Paradise (Lk 23:43).

The chequered history of the thief seems, in an instant, to take on new meaning: he was meant to be there to accompany the Lord’s suffering. And that moment does nothing more than confirm the entire meaning of Jesus’ life: always and everywhere to offer salvation. The attitude of the good thief makes the horror and injustice of Calvary – where helplessness and incomprehension are met with jeers and mockery from those indifferent to the death of an innocent man – become a message of hope for all humanity. Save yourself! The shouts of scornful derision addressed to the innocent victim of suffering will not be the last word; rather, they will awaken a response from those who let their hearts be touched, who choose compassion as the authentic way to shape history.

Today, in this place, we want to renew our faith and our commitment. We know too well the history of our failures, sins and limitations, even as the good thief did, but we do not want them to be what determines or defines our present and future. We know how readily all of us can take the easy route of shouting out: Save yourself! and choose not to think about our responsibility to alleviate the suffering of innocent people all around us. This land has experienced, as few countries have, the destructive power of which we humans are capable. Like the good thief, we want to speak up and profess our faith, to defend and to assist the Lord, the innocent man of sorrows. We want to accompany him in his ordeal, to stand by him in his isolation and abandonment, and to hear once more that salvation is the word the Father desires to speak to all: Today you will be with me in Paradise.

Saint Paul Miki and his companions gave their lives in courageous witness to that salvation and certainty, along with the hundreds of martyrs whose witness is a distinguished element of your spiritual heritage. We want to follow in their path, to walk in their footsteps and to profess courageously that the love poured out in sacrifice for us by Christ crucified is capable of overcoming all manner of hatred, selfishness, mockery and evasion. It is capable of defeating all those forms of facile pessimism or comfortable indolence that paralyze good actions and decisions. The Second Vatican Council reminds us: they are sadly mistaken who believe that, because we have here no lasting city and keep our gaze fixed on the future, we can ignore our responsibility for the world in which we live. They fail to see that the very faith we profess obliges us to live and work in a way that points to the noble vocation to which we have been called (cf Gaudium et Spes, 43).

Our faith is in the God of the living. Christ is alive and at work in our midst, leading all of us to the fullness of life. He is alive and wants us to be alive; Christ is our hope (cf Christus Vivit, 1). Each day we pray: Lord, may your kingdom come. With these words, we want our own lives and actions to become a hymn of praise. If, as missionary disciples, our mission is to be witnesses and heralds of things to come, we cannot become resigned in the face of evil in any of its forms. Rather, we are called to be a leaven of Christ’s Kingdom wherever we find ourselves: in the family, at work or in society at large. He urges us on to be a little opening through which the Spirit continues to breathe hope among peoples. The kingdom of heaven is our common goal, a goal that cannot be only about tomorrow. We have to implore it and begin to experience it today, amid the indifference that so often surrounds and silences the sick and disabled, the elderly and the abandoned, refugees and immigrant workers. All of them are a living sacrament of Christ our King (cf Mt 25:31-46). For if we have truly started out anew from the contemplation of Christ, we must learn to see him especially in the faces of those with whom he himself wished to be identified (John Paul II, Novo Millennio Ineunte, 49).

On that day at Calvary, many voices remained silent; others jeered. Only the thief’s voice rose to the defence of the innocent victim of suffering. His was a brave profession of faith. Each of us has the same possibility: we can choose to remain silent, to jeer or to prophesy.

Dear brothers and sisters, Nagasaki bears in its soul a wound difficult to heal, a scar born of the incomprehensible suffering endured by so many innocent victims of wars past and those of the present, when a third World War is being waged piecemeal. Let us lift our voices here and pray together for all those who even now are suffering in their flesh from this sin that cries out to heaven. May more and more persons be like the good thief and choose not to remain silent and jeer, but bear prophetic witness instead to a kingdom of truth and justice, of holiness and grace, of love and peace (cf Roman Missal, Preface of Our Lord Jesus Christ, King of the Universe).
Texto original en español
Testo in italiano
Texte en français
Texto em português