Japan: Homage to the Martyrs

This morning, leaving the Atomic Bomb Hypocenter Park, the Holy Father travelled to the Monument to the Martyrs of Nagasaki where he paid homage to Saint Paul Miki and to his 25 companions, all of whom are Christian martyrs. 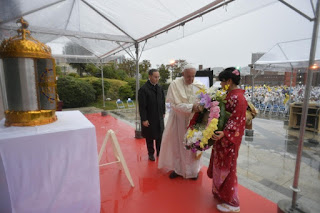 Upon his arrival, the Pope was welcomed by the Director of the Museum, a priest and a fellow Jesuit.  After the singing of an entrance song, a family offered Pope Francis a bouquet of flowers which he placed in front of the Memorial.  The Holy Father then lit a candle which was presented to him by a descendent of one of the persecuted Christians.

After having paused in silent prayer before the Monument to the Martyrs and having incensed the relics, the Holy Father shared his greetings and led the recitation of the Angelus with the faithful and with pilgrims who were in attendance. 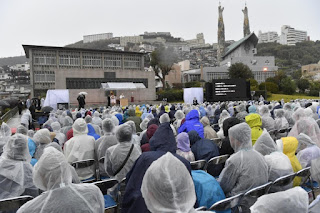 Before climbing aboard his car, the Pope was presented with an image of Blessed Giulio Nakaura who took part in the historical diplomatic mission to Rome and who, having become a Jesuit priest, died a martyr during the persecutions against the Christians.

The Holy Father then travelled to the residence of the Archbishop of Nagasaki where, upon his arrival, he was welcomed by 14 minor seminarians and 15 aspirants from the two Religious Congregations who were founded in Nagasaki. 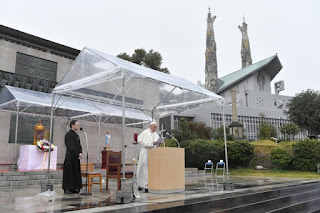 Greetings of the Holy Father, Pope Francis
shared in homage to the Holy Martyrs of Japan

I have very much looked forward to this moment. I have come here as a pilgrim to pray, to confirm you in the faith, and to be confirmed by the faith of these brothers and sisters who by their witness and devotion light up our path. I thank all of you for your warm welcome.

This shrine bears the images and names of Christians who were martyred long ago, starting with Paul Miki and his companions on 5 February 1597, and a host of other martyrs who consecrated this ground by their suffering and their death.

However, this shrine does more than speak of death; it also speaks of the triumph of life over death. Saint John Paul II saw this place not simply as the mount of the martyrs but a true Mount of the Beatitudes, where our hearts can be stirred by the witness of men and women filled with the Holy Spirit and set free from selfishness, complacency and pride (cf Gaudete et Exsultate, 65). For here the light of the Gospel shone forth in the love that triumphed over persecution and the sword.

This shrine is above all a monument to Easter, for it proclaims that the last word – despite all evidence to the contrary – belongs not to death but to life. We are not destined for death but for the fullness of life. This was the message the martyrs proclaimed. Yes, here we see the darkness of death and martyrdom, but also the light of the resurrection, as the blood of the martyrs becomes the seed of the new life that Jesus wishes to bestow on us. Their witness confirms us in faith and helps us to renew our dedication and commitment to that missionary discipleship which strives to create a culture capable of protecting and defending all life through the daily “martyrdom” of silent service towards all, especially those in greatest need.

I have come to this monument of the martyrs to pay homage to these holy men and women. But I also come in humility, as one who himself, as a young Jesuit from “the ends of the earth”, found powerful inspiration in the story of the early Japanese martyrs. May we never forget their heroic sacrifice! May it not remain as a glorious relic of the past, to be kept and honored in a museum, but rather as a living memory, an inspiration for the works of the apostolate and a spur to renewed evangelization in this land. May the Church in the Japan of our own day, amid all its difficulties and signs of hope, feel called to hear anew each day the message proclaimed by Saint Paul Miki from the cross, and share with all men and women the joy and the beauty of the Gospel which is the way of truth and life (cf Jn 14:6). May we free ourselves daily from whatever weighs us down and prevents us from walking in humility, freedom, parrhesia and charity.

Brothers and sisters, in this place we are united with those Christians throughout the world who, in our own day, suffer martyrdom for the faith. They are the martyrs of the twenty-first century and their witness summons us to set out with courage on the path of the Beatitudes. Let us pray with them and for them. Let us speak out and insist that religious freedom be guaranteed for everyone in every part of our world. Let us also condemn the manipulation of religions through “policies of extremism and division, by systems of unrestrained profit or by hateful ideological tendencies that manipulate the actions and the future of men and women” (Document on Human Fraternity, Abu Dhabi, 4 February 2019).

Let us ask Our Lady, Queen of Martyrs, Saint Paul Miki and all his companions, who throughout history have proclaimed by their lives the wonders of the Lord, to pray for your country and for the whole Church. May their witness awaken and sustain in all of us the joy of the mission.