The Holy Father, Pope Francis has sent a Message to those who are participating in the XXXI meeting concerning the Montreal Protocol on Substances that Deplete the Ozone Layer.  The meeting is taking place in Rome at the offices of the Food and Agriculture Organization (FAO) from 4 to 8 November 2019.  The Holy Father's Message was read aloud today at the meeting by the Cardinal Secretary of State, Pietro Parolin. 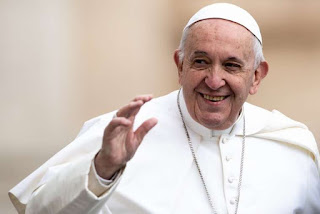 Message of the Holy Father, Pope Francis
to the Participants in the Thirty-first Meeting
of the Parties to the Montreal Protocol

I offer a cordial greeting to all those taking part in the Thirty-first Meeting of the Parties to the Montreal Protocol on Substances that Deplete the Ozone Layer. This Protocol, together with its Amendments and the Vienna Convention for the Protection of the Ozone Layer, represents a model of international cooperation not only in the area of environmental protection but also that of the promotion of integral human development.

Nearly thirty-five years have passed since the first legally binding international Convention devoted to the protection of the ozone layer was opened for signature in Vienna on 22 March 1985. It was to become the first Convention of the United Nations system to gain universal endorsement on the part of the entire family of nations, which today numbers one hundred and ninety-seven signatory States.

These thirty-five years have yielded positive results. In fact, many scientific studies, including more recent ones, attest to how the thinning of the ozone layer is gradually being reduced.

In this regard, I would like to focus on three lessons that we can learn from the thirty-five years that have passed since the implementation of the international ozone regime.

First, there is a need to emphasize and appreciate how that regime arose from a broad and fruitful cooperation among different sectors: the scientific community, the political world, economic and industrial actors and civil society.

This cooperation has shown how we can achieve important outcomes, which make it simultaneously possible to safeguard creation, to promote integral human development and to care for the common good, in a spirit of responsible solidarity and with profound positive repercussions for present and future generations (Statement, attached to the instrument of adhesion on the part of the Holy See to the Vienna Convention for the Protection of the Ozone Layer, of the Montreal Protocol on Substances that Deplete the Ozone Layer and its first four Amendments, 9 April 2008).

In a certain sense, the international ozone regime demonstrates that we have the freedom needed to limit and direct technology; we can put it at the service of another type of progress, one which is healthier, more human, more social, more integral (Laudato Si’, 112). This allows us to be confident that although the post-industrial period may well be remembered as one of the most irresponsible in history, nonetheless there is reason to hope that humanity at the dawn of the twenty-first century will be remembered for having generously shouldered its grave responsibilities (LS, 165).

We are in fact facing a cultural challenge either for or against the common good. Here, an honest and fruitful dialogue truly capable of listening to different needs and free of special interests, together with a spirit of solidarity and creativity, are essential for the building of the present and future of our planet.

In the same way, and here is the second lesson I would mention, this cultural challenge cannot be met solely on the basis of a technology that, presented as the only way of solving these problems, in fact proves incapable of seeing the mysterious network of relations between things and so sometimes solves one problem only to create others (LS, 20).

This was evidenced by the need to adopt, in 2016, a new Amendment to the Montreal Protocol, the Kigali Amendment. That Amendment has the aim of prohibiting substances which, in themselves, do not contribute to damaging the ozone layer, but which affect the warming of the atmosphere and whose use has increased as a means of replacing certain substances harmful to the ozone layer.

It is important that the Kigali Amendment quickly gain universal approval on the part of the whole family of nations, as has happened with the Vienna Convention and the Montreal Protocol.

In this regard, I am pleased to announce the intention of the Holy See to adhere to the Kigali Amendment. With this gesture, the Holy See desires to continue giving its moral support to all those States committed to the care of our common home.

Moving ahead, the third lesson which I would mention is the importance that this care for our common home be anchored in the realization that everything is connected.

It can be said that the Kigali Amendment also appeals to this principle, since it represents a sort of bridge between the ozone problem and the phenomenon of global warming, thus highlighting their interaction.

Careful consideration of the various interconnections of our decisions and their resulting impact involves numerous levels of complexity. We are living at an historic moment marked by challenges that are pressing yet stimulating for the creation of a culture effectively directed to the common good. This calls for the adoption of a farsighted vision on how most effectively to promote integral development for all the members of the human family, whether near or far in space or time. This vision must take shape in centres of education and culture where awareness is created, where individuals are trained in political, scientific and economic responsibility, and, more generally, where responsible decisions are made.

The continued acceleration of changes affecting humanity and our planet, coupled today with a more intense pace of life and work, should constantly urge us to ask whether the goals of this progress are truly directed to the common good and to a sustainable and integral human development, or whether they cause harm to our world and to the quality of life of much of humanity, now and in the future (LS, 18).

A thoughtful response to this question can only be given in the light of a consideration of the three points on which I have focused. First, to give real life to dialogue for the sake of shared responsibility for the care of our common home, one in which no one absolutizes his or her own point of view. Then, to make technological solutions part of a broader vision that takes into consideration the variety of existing relationships. Finally, to structure our decisions on the basis of the central concept of what we can call integral ecology, grounded in the realization that everything is connected.

I express my prayerful hope that the international ozone regime, as well as other praiseworthy initiatives of the global community on care for our common home, can continue on this complex, challenging, but always stimulating path.