This morning, after having greeted the personnel and benefactors of the Apostolic Nunciature, and having left that place, the Holy Father, Pope Francis travelled by car to the Sophia University where, at 7:45am local time (7:45pm EST Monday), he celebrated a private Mass with the members of the Company of Jesus in the Kulturzentrum Chapel.  At the conclusion of the Mass, the Pope greeted the priests who had concelebrated with him. 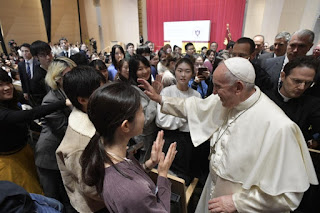 At 9:45am local time (9:45pm EST Monday), the Pope visited Sophia University.  Accompanied by the Provincial of the Jesuits and by the Chancellor of the University, he arrived at the podium and, after an entrance hymn had been sung and greetings had been offered by the Chancellor, he shared his speech.

When he was finished, after having exchanged gifts, the Holy Father left the Sophia University and travelled by car to the Tokyo-Haneda airport. 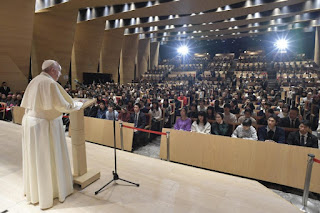 Greetings of the Holy Father, Pope Francis
shared with the community of the
Sophia University in Tokyo

It is a great joy for me to be able to spend a few minutes with you at the conclusion of my apostolic visit, shortly before leaving Japan and returning to Rome. It is time to say goodbye.

My stay in this country has been short and very intense, but I would like to thank God and all of you for the opportunity to visit this country which Saint Francis Xavier so greatly desired to know, and where so many martyrs bore witness to their Christian faith. Despite the fact that Christians are a minority, their presence is felt. I myself have witnessed the general esteem in which the Catholic Church is held, and I hope that this mutual respect may increase in the future. I would also observe that, for all the efficiency and order that mark Japanese society, I have sensed a yearning, too, for something greater: a profound desire to create an ever more humane, more compassionate, more merciful society.

Study and meditation are part of every culture, and your Japanese culture is rightly proud of its ancient and rich heritage in this regard. Japan has been able to integrate the thinking and the religions of Asia as a whole, and to create a culture with a well-defined identity. The Ashikaga School, which so impressed Saint Francis Xavier, is an example of the capacity of Japanese culture to absorb and to pass on knowledge. Centers of study, meditation and research continue to play an important role in present-day culture. For this reason, it is important that they preserve their autonomy and freedom, for the sake of a better future. Since universities continue to be the primary place where future leaders are trained, it is necessary that a breadth of knowledge and culture inspire every aspect of the life of educational institutions, making them ever more inclusive and capable of generating opportunities and social advancement.

Sophia. In order to manage our resources in constructive and efficient ways, we have always been in need of true sophia, true Wisdom. In a society as competitive and technologically oriented as present-day Japan, this university should be a center not only of intellectual formation, but also a place where a better society and a more hope-filled future can take shape. In the spirit of my encyclical Laudato Si’, I would add that love for nature, so typical of Asian cultures, should here find expression in a sapient and foresighted concern for the protection of the earth, our common home. A concern that can join in the promotion of a new episteme that can provide a broader vision as opposed to the reductionism born of the technocratic paradigm (cf LS 106-114). Let us not forget that an authentic humanity, calling for a new synthesis, seems to dwell in the midst of our technological culture, almost unnoticed, like a mist seeping gently beneath a closed door. Will the promise last, in spite of everything, with all that is authentic rising up in stubborn resistance? (LS, 112).

Sophia University has always been marked by a humanistic, Christian and international identity. From its foundation, the university has been enriched by the presence of professors from various countries, even at times from countries in conflict with one another. Yet all were united by the desire to give the best of themselves to the young people of Japan. That same spirit continues in the many ways that you provide help to those in greatest need, here and abroad. I am confident that this aspect of your university’s identity will grow ever stronger, so that today’s great technological advances can be put at the service of a more humane, more just and ecologically responsible education. The Ignatian tradition, on which Sophia is based, ought to inspire professors and students alike to create an atmosphere that fosters reflection and discernment. No student of your university should graduate without having learned how to choose, responsibly and freely, what he or she knows in conscience is best. In every situation, even the most complex, may they be concerned that their conduct is just and humane, conscientious and responsible, and show themselves resolute defenders of the vulnerable. May they be known for the integrity so greatly needed in these times when words and actions are often either misleading or deceitful.

The Universal Apostolic Preferences that the Society of Jesus proposed and that I approved this year make it clear that the accompaniment of young people is an important priority worldwide, and that all Ignatian institutions must foster that accompaniment. As evidenced by the Synod on Youth and its documents, the universal Church likewise looks with hope and interest to young people worldwide. Your university as a whole ought to focus on the young, who should not only receive excellent education, but also be part of that education, offering their insights and sharing their vision and hopes for the future. May your university be known for such a model of sharing and for the enrichment and vitality that it generates.

The Christian and humanistic tradition of Sophia University is fully consonant with yet another of the Preferences that I mentioned, namely that of walking with the poor and the outcasts of our world. The university, focused on its mission, should always be open to creating an archipelago capable of connecting realities that might be considered culturally and socially separate. The marginalized would be creatively incorporated into the life and curriculum of the university, in an effort to bring about an educational approach aimed at reducing distances and disconnects. Quality university education should not be the privilege of a few, but constantly informed by the effort to serve justice and the common good. A service to be carried out by each one in the sector in which he or she is called to work. This is a concern that regards everyone. Peter’s advice to Paul remains true today: that we not forget the poor (cf Gal 2:10).

Dear young people, dear professors and all who work at Sophia University: may these reflections and our meeting today bear fruit for your lives and for the life of this academic community. The Lord and his Church are counting on you to share in the mission of seeking, finding and spreading divine Wisdom, and thus offering joy and hope to present-day society. Please, remember too, to pray for me and for all those most in need of our help.

And now, as I prepare to leave Japan, I thank you, and through you, the entire Japanese people for the kind reception and welcome accorded me during my Apostolic Visit. I assure you that I will keep all of you in my heart and my prayers. Thank you.
Texto original en español
Testo in italiano
Texte en français
Texto em português