Angelus about the Transfiguration

At noon today (6:00am EST), the second Sunday of Lent, the Holy Father, Pope Francis appeared at the window of his study in the Vatican Apostolic Palace to recite the Angelus with pilgrims gathered in Saint Peter's Square. 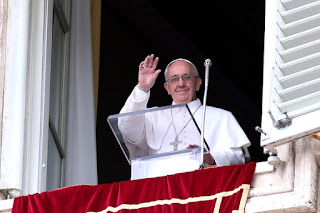 Today's gospel, for the second Sunday of Lent, invites us to contemplate the transfiguration of Jesus (cf Mk 9:2-10).  This episode is related to that which took place six days before, when Jesus revealed to his disciples that in Jerusalem, he would have to suffer much and be rejected by the elders, high priests and scribes, be killed and, after three days, rise again (Mk 8:31).  This revelation had challenged Peter and all the other disciples, who could not accept the idea that Jesus would be rejected by the leaders of peoples and then killed.  In fact, they had been expecting a powerful, strong and dominating Messiah, but instead Jesus presented himself as humble, meek, a servant of God, a servant of mankind, who would give his life in sacrifice, travelling along the path of persecution, suffering and death.  But how could someone follow a Master and a Messiah whose earthly life was to end in such a way?  This was what the disciples were thinking.  And the response is found precisely in the transfiguration.  What is the transfiguration of Jesus?  It is an early Easter apparition.

Jesus took the three disciples with him, Peter, James and John and led them up a high mountain (Mk 9:2); and there, for just a moment, he showed them his glory, the glory of the Son of God.  This event of the transfiguration allowed the disciples to face Jesus' passion in a positive manner, without being overwhelmed.  They saw him as he would be after the passion, in glory.  And in this way, Jesus prepared them for the trial that was to come.  The transfiguration helped the disciples, and it helps us to understand that the passion of Christ is a mystery of suffering, but above all, it is a gift of love, the infinite love of Jesus.  Jesus' transfiguration on the mountaintop also helps us to better understand his resurrection.  To understand the mystery of the cross, it is necessary that we know in advance that the One who is suffering and the one who is glorified is not only a man, but the Son of God, who with his love, which is faithful even unto death has saved us.  In this way, the Father renews his messianic declaration about his Son, which he had spoken at the river Jordan following Jesus' baptism, exhorting: Listen to him! (Mk 9:7).  Disciples are called to follow the Master with trust and hope despite his death; Jesus' divinity was demonstrated precisely on the cross, in his death in that way, therefore the evangelist Mark places the profession of faith on the lips of the centurion: Truly, this man was the Son of God (Mk 15:39).

Let us turn now in prayer to the Virgin Mary, the human creature who was inwardly transformed by the grace of Christ.  Let us trust in her maternal help as we continue our Lenten journey with faith and generosity.

In these days, my thoughts turn to beloved and martyred Syria, where the war has intensified, especially in eastern Ghouta.  This month of February has been one of the most violent in the seven years of the conflict: hundreds, thousands of civilian victims, children, women, the elderly; they have been hospitalized; people can't find food to eat ... Brothers and sisters, this is inhuman.  We cannot fight evil with more evil.  War is evil.  Therefore, I want to issue an impassioned plea for an immediate end to the violence, for immediate access to humanitarian assistance - food and medicine - and evacuation for those who are wounded and sick.  Let us pray together, and ask God to grant this request.

I offer a cordial greeting to all of you pilgrims here in Rome, from Italy and from other countries, especially those who have come from Spis (Slovakia).

I greet the representatives from the diocesan television station in Prato along with their Bishop; the young people in the orchestra from Oppido Mamertina and the scouts from Genoa.  I greet the young people who have been recently Confirmed and those who have recently professed their faith and come from Serravalle Scrivia, Verdellino, Zingonia, Lodi, Renate and Verduggio.

I greet the group who have come to celebrate the Day of rare diseases and I want to encourage all those who are working in this field.  Thank you.  Thank you for what you are doing.