The Congregation for the Evangelization of Peoples has today released the following statement. 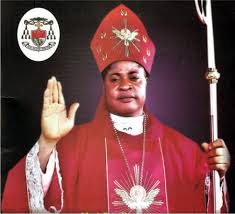 The Holy Father, after having accepted the resignation of His Excellency, the Most Reverend Peter Ebere Okpaleke, has relieved him of the pastoral care of the Diocese of Ahiara, and at the same time has thanked him for his love for the Church.

Following the Instructions of His Holiness Pope Francis, during the months of June and July 2017, He received 200 letters from individual priests of the Diocese of Ahiara, in which they manifested to Him obedience and fidelity.Some priests, however, pointed out their psychological difficulty in collaborating with the Bishop after years of conflict. Taking into account their repentance, the Holy Father decided not to proceed with the canonical sanctions and instructed the Congregation for the Evangelization of Peoples to respond to each of them. In this line, the Congregation has urged every priest to reflect on the grave damage inflicted on the Church of Christ and expressed hope that in the future they will never again repeat such unreasonable actions opposing a Bishop legitimately appointed by the Supreme Pontiff.

The Holy Father is grateful to all the faithful: priests, religious and laity, who have shown closeness to His Excellency, Bishop Okpaleke, and have supported him with their prayers. He is also grateful to the Bishops of the Episcopal Conference of Nigeria for the support given to their Brother Bishop, to whom He sends a special Apostolic Blessing. The Holy Father thanks His Eminence John Cardinal Onaiyekan for his service as Apostolic Administrator, Archbishop Ignatius Kaigama, President of the Episcopal Conference, and the Metropolitan Archbishop of Owerri, His Excellency Anthony Obinna, for the efforts made to solve the lamentable situation.

For the time being, the Holy Father does not intend to appoint a new Bishop in Ahiara, but He reserves to Himself the right to continue to have a special and particular concern for this Diocese, assigning a new Apostolic Administrator, Sede vacante et ad nutum Sanctae Sedis, in the person of His Excellency, the Most Reverend Lucius lwejuru Ugorji, Bishop of Umuahia, to whom He grants all the faculties reserved to an Ordinary. The Holy Father, who accompanies with prayer this new phase in the life of the Church in Ahiara, hopes that, with the new Apostolic Administrator, the local Church will recover its vitality and never again suffer such actions that so wound the Body of Christ.
(Agencia Fides)

On June 8, 2017, the Holy Father hosted a meeting at the Vatican which included a delegation from the Diocese of Ahiara and other leaders from the Church in Nigeria.  They had travelled to Rome to pray and to discuss the challenge of accepting the Shepherd who was appointed (in 2012) by His Holiness, Benedict XVI to lead the Church in Ahiara. 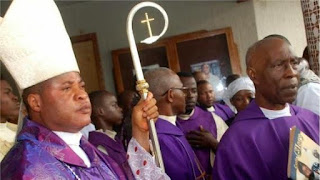 Repentance and reconciliation are urgent, says Archbishop Okpaleke announcing his resignation as Bishop of Ahiara
Abuja (Agenzia Fides) - Since the announcement of the appointment, there have been violent reactions and resistance from a group of the Ahiara diocesan clergy, the laity and others, stresses His Excellency, Peter Ebere Okpaleke, Bishop of Ahiara, in the Pastoral Letter published on February 14, Ash Wednesday, in which he announced his resignation as Bishop of the Nigerian diocese. His Excellency, Peter Okpaleke had been appointed Bishop of the Diocese of Ahiara on December 7, 2012 by Pope Benedict XVI. His appointment, however, provoked strong opposition both among diocesan priests and some lay people. As recalled in his letter, in the face of this situation, on 15 February 2013, Bishop Okpaleke humbly requested that the period for his Episcopal Consecration and taking canonical possession of Ahiara diocese be extended for more weeks to see if the situation on ground would improve. The request was granted, the Bishop writes. The situation did not improve, but he was eventually consecrated on May 21, 2013, outside the diocese, at Seat of Wisdom Major Seminary, Ulakwo, Owerri, due to the situation on ground in Ahiara diocese. Up to now I could not take possession of the diocese of Ahiara, underlines Bishop Okpaleke, who points out It is now five years, two months and a week since the Papal appointment. Also the interventions of the Congregation for the Evangelization of Peoples and the Secretariat of State did not yield the desired fruits. The details of peace efforts and the unreasonable, violent reactions of some priests and faithful of Ahiara are still available on the internet.

Mgr. Okpaleke was forced to reside in Awka where I have remained till date. Not even the intervention of Pope Francis, who invited Bishop Okpaleke to the Vatican in June 2017, unblocked the situation, despite the fact that the Holy Father had confirmed the appointment of Bishop Okpaleke and asked for a letter of apology from all the priests incardinated in Ahiara, even those who resided outside the diocese. I am not in position to say the number that complied faithfully with the Pope's demand, writes Bishop Okpaleke. What is clear is that some of the priests asked the lay faithful to take over the leadership of the dispute. Archbishop Okpaleke emphasizes that till date, the legitimate representatives of the Catholic Church in Ahiara diocese have no access to the cathedral, the curia, etc.

The attitude of the priests and faithful who rejected the appointment of Bishop Okpaleke is, in his opinion, a refusal to give the Holy Spirit a chance, especially since the Bishop had chosen as his episcopal motto Veni Sancte Spiritus!.

Taking the above into consideration, I am convinced, in conscience that my remaining the Bishop of Ahiara Diocese is no longer beneficial to the Church, said Bishop Okpaleke. "I do not think that my apostolate in a diocese where some of the priests and lay faithful are ill disposed to have me in their midst would be effective. Therefore, for the good of the Church and the Catholic diocese of Ahiara in particular, I humbly requested the Holy Father to accept my resignation from the office of the Bishop of Ahiara. I have taken this step also for the good of all the faithful of Ahiara Diocese, especially those that have remained faithful in a local Church being controlled by some priests, he stresses.

I consider my resignation from the position of Bishop of Ahiara as the only proper option now to facilitate re-evangelization of the faithful and, most importantly and urgently, the priests of Ahiara Diocese, especially now that the Holy Father and his collaborators in the Roman Curia can already decipher priests who affirmed their loyalty to the Holy Father and those who decided to bow out of the Catholic Church in disobedience.

After thanking those who offered him support in all these difficult years, Bishop Okpaleke reiterates his love and his prayer towards the faithful of Ahiara Diocese and invites all to repentance. I invite any dissidenting priests to re-examine their initial motivations for becoming priests in the Catholic Church. Repentance and reconciliation are urgent.
at 08:30