Bosnia and Herzegovina at the Vatican 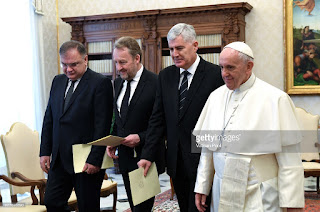 During the discussions, which took place in a cordial atmosphere, satisfaction was expressed for the good relations between the Holy See and Bosnia and Herzegovina, and the parties renewed their commitment to continuing on the path of constructive bilateral collaboration and to strengthening dialogue and inter-religious understanding.

Attention then turned to the current domestic context, marked by various challenges of an economic and social nature, and to the urgency of promoting initiatives to guarantee a future to the new generations. Mention was also made of the need to pursue the path of reform in a concerted way, also with a view to the integration of the country in the European Union, and to guarantee effective equality between the constituent peoples, favouring peaceful co-existence and a climate of reconciliation between all members of society. Finally, the parties focused on several political issues, including the importance of cooperation between the States of the Region.
at 09:26