No violence in the name of religion

At 9:30am today (3:30am EST), in the Clementine Hall at the Vatican Apostolic Palace, the Holy Father, Pope Francis received in audience a group of participants taking part in a Conference entitled Tackling violence committed in the name of religion. 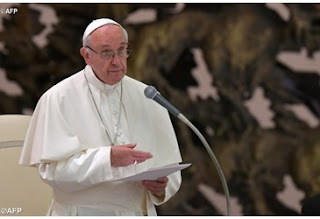 Greetings of the Holy Father, Pope Francis
concerning violence committed in the name of religion

I offer you a warm welcome and I thank you for your presence. It is highly significant that political authorities and religious leaders can meet to discuss how to respond to acts of violence committed in the name of religion.

I would begin by reiterating what I have often stated, and in particular during my visit to Egypt: God, the lover of life, never ceases to love man, and so he exhorts us to reject the way of violence. Above all and especially in our day, the religions are called to respect this imperative, since, for all our need of the Absolute, it is essential that we reject any ‘absolutizing’ that would justify violence. For violence is the negation of every authentic religious expression… We have an obligation to denounce violations of human dignity and human rights, to expose attempts to justify every form of hatred in the name of religion, and to condemn these attempts as idolatrous caricatures of God (Address to Participants in the International Peace Conference, Al-Azhar Conference Centre, Cairo, 28 April 2017).

Violence promoted and carried out in the name of religion can only discredit religion itself. Consequently, such violence must be condemned by all, and especially by genuinely religious persons, who know that God is always goodness, love and compassion, and that in him there is no room for hatred, resentment or vengeance. The religious person knows that among the greatest blasphemies is to invoke God as the justification for one’s own sins and crimes, to invoke him in order to justify killing, mass murder, enslavement, exploitation in whatever form, oppression and persecution of individuals and entire populations.

The religious person knows that God is the Holy One, and that no one can claim to use his name in order to perpetrate evil. Every religious leader is called to unmask any attempt to manipulate God for ends that have nothing to do with him or his glory. We need to show, with unremitting effort, that every human life is sacred, that it deserves respect, esteem, compassion and solidarity, without regard for ethnicity, religion, culture, or ideological and political convictions.

Adherence to a particular religion does not confer additional dignity and rights upon individuals, nor does non-adherence deny or diminish them.

There is a need, then, for a common commitment on the part of political authorities, religious leaders, teachers and those engaged in the fields of education, training and communications, to warn all those tempted by perverse forms of misguided religiosity that these have nothing to do with the profession of a religion worthy of this name.

This will help all those people of good will who seek God to encounter him in truth, to encounter the One who sets us free from fear, hatred and violence, and who desires to use the creativity and energy of each person to spread his plan of love and peace, which is offered to all.

Ladies and Gentlemen, I renew my appreciation for your readiness to engage in reflection and dialogue on a subject of such dramatic import, and for your expert contribution to the growth of a culture of peace always founded on truth and love. May God bless you and your work. Thank you.
at 14:24