Turkey at the Vatican 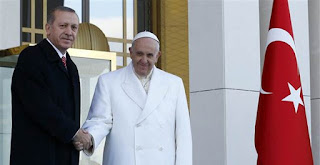 This morning, inside the Vatican Apostolic Palace, the Holy Father Francis received in audience the President of the Republic of Turkey, His Excellency, Mister Recep Tayyip Erdoğan, who subsequently met with His Eminence, Pietro Parolin, the Cardinal Secretary of State, accompanied by His Excellency, Paul Richard Gallagher, Secretary for Relations with States.

During the cordial discussions the bilateral relations between the Holy See and Turkey were evoked, and the parties spoke about the situation of the country, the condition of the Catholic community, efforts relating to the reception of the many refugees and the challenges linked to this. Attention then turned to the situation in the Middle East, with particular reference to the status of Jerusalem, highlighting the need to promote peace and stability in the region through dialogue and negotiation, with respect to human rights and international law.
at 07:59